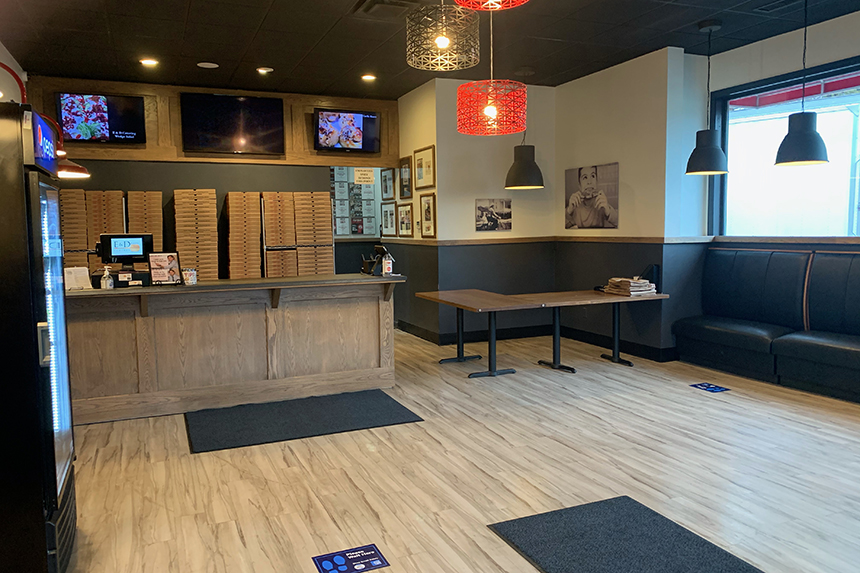 Party of Zero, Your Table Is Ready

Pizza for table four is ready. Wings for table 12 are in the window.”  These are the common sounds that were heard in the restaurant every day. Then suddenly one day in March 2020 everything as we knew it changed. There was a Global Pandemic.  The state mandated that all restaurant dining rooms be immediately shut down. The only thing that would be allowed was takeout and delivery. They told us it would take about two weeks to “flatten the curve.”  “Well, that’s not terrible”, I thought. “It’s a pain, but I can deal with two weeks.” The two weeks came and went, then two more, and then another month. Suddenly the whole script had flipped. There really was no definitive end in sight.

Before it all began, business was always very brisk. Once pandemic life hit us things changed. Now my normally busy takeout and delivery had become insanely mobbed. As one revenue center plummeted to zero,
another one skyrocketed. The total overall sales number was actually higher, way higher! That certainly made this new pandemic way of life easier for me to accept. But other issues started to arise as a result. My kitchen that is designed for volume and speed was now getting overtaxed. In the new world of social distancing my staff was crammed in way too close while trying to pump everything out. I needed more space and I needed it now. On top of that I was walking into my restaurant every morning only to see all of my tables and booths pushed over to the wall since they weren’t in use. The wasted space in my dining room really began to eat at me as I was struggling for space in the kitchen.

Then came the epiphany. What if I got rid of all of the tables, moved my takeout counter forward by 30 feet, and opened up more kitchen space?  We could become strictly delivery and takeout. I quickly dismissed the idea. We were 85-percent takeout/delivery and 15-percent dining in during normal times. The idea of scrapping my 45-seat dining room was nothing short of insanity. I needed to come up with a better idea.

Day after day went by. I continued walking in every morning and staring at those tables and booths pushed up against the wall. I revisited the idea in my head, but after 30 plus years in the restaurant business the notion of no dining room was too radical. That was not how I was brought up in this business.

Another week went by and I was finally at wit’s end. I could no longer look at my scuttled dining room while the kitchen struggled for more room to handle the volume. I called my building contractor and told him how I wanted to change it all. He said, “Are you nuts?”  I quite possibly was, but I instructed him to start as soon as possible before I changed my mind. Low and behold a week later I had a restaurant with zero seating. Now there was a wide open, comfortable area for folks waiting for takeout orders. Delivery drivers had their own pickup area. The counter staff had expanded space for expediting takeout orders. The kitchen now gained that all so valuable room needed to handle the surge in business. One question remained in my mind. “Did I just destroy my business?”

Being located in a family saturated suburb always contributed to a high volume of takeout.  Our name is a locally known brand with a large loyal following, so we had a good foothold moving forward. The results were shocking. We got even busier. The pandemic shutdown had forced people to change their dining habits. Since there were no more dine-in options available anywhere, those folks were now ordering takeout from different restaurants most nights. We began to see an increase in new customers. The physical changes in the restaurant allowed us to handle the surge very efficiently.

After about a month I was able to compare my numbers to what they had previously been. The results were shocking!  By eliminating the servers, I was now saving on payroll, the matching of the taxes being withheld, and the unemployment insurance. Since there was no longer a dining room, I got rid of the liquor license and the associated high-cost liability insurance. Now there was no need to constantly be buying china, silver and glassware. Labor hours were also decreasing for my dishwashers who no longer had to deal with a million bus pans at night’s end.

The only remaining issue was the staff. I could not lay off my servers in good conscience due to the concept change. The answer became clear. Since takeout and delivery was now so much busier, I shifted the servers over to become supervisory counter staff. This enabled the former servers to help refine the methods of communication and interaction between staff and customers picking up orders. They were now teaching the conversational flow and friendliness they exhibited with dining guests to a younger and less experienced counter staff. The restaurant staff circle of life was happening right before my eyes.

As I stand here a year later with the pandemic seemingly subsiding, I see that the decision was prudent. Costs dropped dramatically, sales went up, and margins increased. As the world starts to reopen there is still some trepidation in my heart, but I know one thing for certain. Dining habits have changed. Families will soon start to dine out again and that will inevitably create a small decrease in DELCO sales. One thing that remains, though, is that it has become a very viable and profitable model in our industry.

Make no mistake, my soul is still crushed daily when I see that once beautiful dining room now gone. But I rest easy knowing that, though I may be archaic in some of my ideas, I fought through it and learned how well the DELCO model works. The pandemic hit us, but we adapted, we survived, and we thrived!