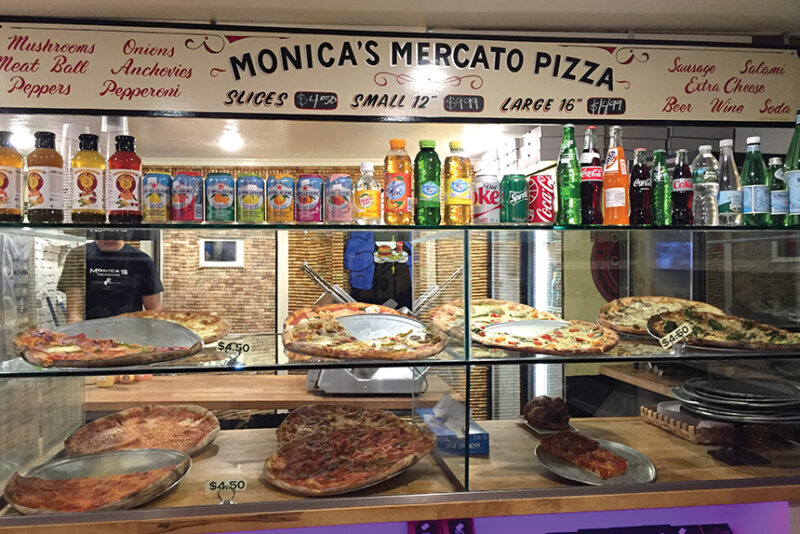 It would be hard to picture an America without pizza by the slice being served at shopping malls, ballparks, stadiums, megastores and school cafeterias. It would be hard to imagine not going to our favorite neighborhood pizza joint in our youth and grabbing our favorite slice. Yet, pizza by the slice, that big part of Americana and of all our upbringings, has been around less than 100 years. And like anything else pizza in America, its story began in New York.

Italian Immigrants brought pizza over with them in the beginning of the 20th century. Lombardi’s in New York has the prestigious title of being the first pizzeria in America in 1905. The early shops had massive coal-fired masonry ovens built to bake bread primarily. The bakers used coal as opposed to wood they used in their native country because it took up less space and burned more efficiently, cutting their costs significantly.

In the 20s, pizza became more popular, but it was amongst the Italian community, it was not part of the New York culture yet. Smaller stainless steel, coal-fired ovens became available, and there were a number of shops that opened up around the city. Much like the very popular Neopolitan wood-burning pizzas today, the pizzas being baked in the high heat ovens were sold whole because being cooked at such a high temperature for such a short time, it is best to eat quickly so that it does not get tough and chewy when it cools down.

Like Elon Musk changed the auto industry and Howard Shultz revolutionized the way we drink coffee in America, Frank Mastro was responsible for pioneering pizza all over the country as we know it today.

Frank believed pizza could be as popular as the hot dog in America. He believed it could take America by storm and create endless opportunities for his fellow working-class Italian neighbors, if only he could figure out a different method other than the bulky, costly, messy and high maintenance coal oven.

Thus, in the 30s, amidst the Great Depression, Frank created the first version on the gas-fired pizza oven that we see all over the country now, and he convinced Blodgett to manufacture it for him.

Being the visionary he was, he set up an operating pizza shop in the Bowery to model what he believed a modern American pizzeria should be, and to showcase and sell his ovens. He would finance his buyers, some with no money down, and share recipes and concepts with them and also help them set up their shops.

This was not only the ushering of mainstream pizza in America. This was also the advent of pizza by the slice by “The Pizza King”, as news publications later dubbed him. At half the temperature of coal, the pizzas take longer to cook and bake up drier. But they also have a longer shelf life because water is cooked out, making them reheat-able. Pizza by the slice, most of the time needs to be reheated. So, his ovens changed the game, and it’s easy to see why in a hustling bustling city like New York, in time, there would be a pizza by the slice shop on almost every corner.

My journey in the pizza industry began when I was only 13, working with my father in his first pizza shop. The mid-90s was a special time for my family, as many of them got their start in the business. Currently my family owns and operates over 20 pizza restaurants in the Chicagoland area and that primarily sell pizza by the slice.

We are pizza by the slice “royalty” in these parts…

Many factors come into play when setting up pizza by the slice, from correct product and ingredient selection to proper placement and marketing. Here are a few things that you must do in order to maximize your chances of success.

At my seminar at Pizza Expo on Tuesday, March 22, I will tell my personal story of how I went from peddling pizza slices outside night clubs in downtown Chicago and at summer outdoor festivals when I was only 16, to owning multiple locations and currently catering slices to some of Chicago’s biggest and prestigious companies including United Airlines, Goldman Sachs, Marriott Hotels, The Chicago Board of Trade, Lagunitas Brewing, Rush Hospital and many movie and popular TV shows sets in town.

We’ll discuss how my family built a little pizza empire in Chicago and how those lessons could help you whether you are thinking about starting your own business, have an existing store or looking to expand to multiple locations.

I’ll also go over the ins and outs of a pizza by the slice operation, how to add pizza by the slice to your current pizzeria if you are not offering it, different styles that work, pizza slice trends, how to maximize profits and build a cult like following. And of course, like any of you that have attended previous seminars of mine at the expo, I will open up to a lengthy Q and A and answer any questions you might have. If you see me anywhere at the expo, feel free to reach out.

We are all one big community in this industry, and if there’s anything I could do to help you I sincerely will.

Pasquale Di Diana is the owner of Bacci in Chicago, IL