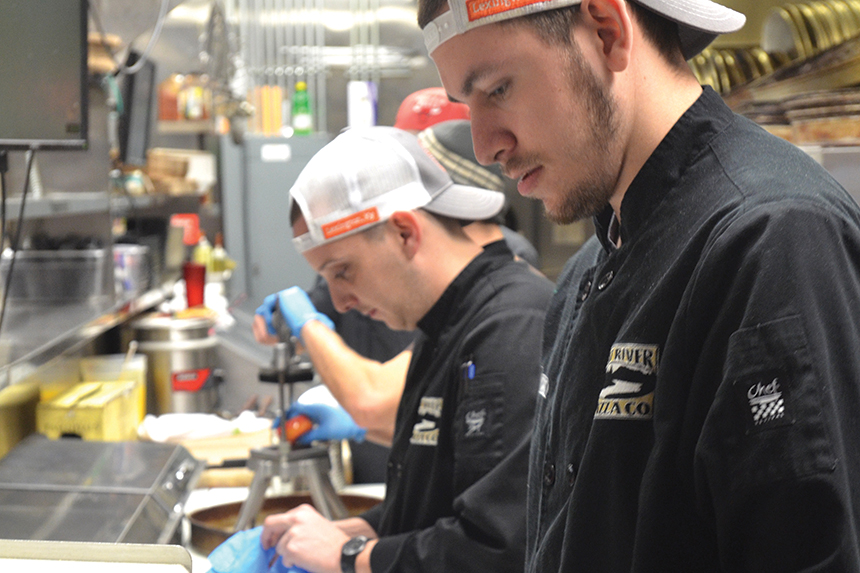 I read Dan Collier’s story about food cost in the March issue of Pizza Today and enjoyed the
article, but I do have a different perspective on food cost. I have met Dan a few times when we were both speakers at Pizza Expo, and really enjoyed listening to him and love his passion for the pizza business. With that being said, I have a different experience with food cost.

When I was a Domino’s supervisor in the early 1990s, our priority and focus was always on food cost. The reason is simple: Nearly every other cost is fixed and cannot be controlled, so I understood the focus on food cost. I did “Food Cost & Profitability” training classes that taught the importance of watching every food item so carefully to the point that it became an obsession for many of the managers, many of whom would eventually become franchise owners. During one of these classes, a student asked me what would happen if his food cost went from the 24 percent that Domino’s said was the goal, to 34 percent or even higher. I then asked the class, “Would you rather run 25 percent food cost at $5,000 AWUS (Average Weekly Unit Sales), or run 50 percent food cost at $10,000 AWUS?”

The class went silent as if I were a preacher who just used the Lord’s name in vain in church. Most of the class then spoke up, saying it was impossible to run 50 percent food cost without going out of business. The remaining students then said that it was the same thing, since the second numbers were just doubled. I was shocked that no one chose the 50 percent food cost scenario. I said, “Let’s do some basic math. In the first example, 25 percent of $5,000 is $1,250, which is what you would spend on your food, with $3,750 remaining for other costs. In the second example, 50 percent of $10,000 is $5,000 which would be spent on food, with $5,000 left for other costs. So, would you rather have $3,750 or $5,000?”. Even with the numbers staring right at them, they could not accept that a higher food cost is not necessarily bad.

Over time I came to the realization that customer satisfaction and customer retention was more valuable than a few percentage points in food cost. What does it cost to keep a customer happy? Are you hoping to satisfy your customer, or trying to wow them with the product you are selling? How much do you spend in advertising trying to gain new customers when you really should just focus on retaining the ones you have?

In 1995, I bought my first Domino’s store on Long Island in New York. There were 34 stores on Long Island, and the store I bought was doing an AWUS of $4,600. My store was around 30th in sales of the 34. I made some big changes to the store, and with the help of my new wife Jessica, within five months our AWUS went to over $20,000 with a record week of over $25,000. Our store went from 30th to 4th. Some of the franchisees came to my store to see what I had done to increase my sales in this manner. I told them what I did, which primarily was increasing the cheese and toppings on the pizza. Yes, I did some other things, but the primary thing was simply putting more cheese and toppings on my pizzas and charged a reasonable price for the pizza. They saw the pizzas I was putting out and asked what my food cost was. I said I was running about 7-10 percent above the Domino’s food cost goal. Again, they could not believe I was still in business with such a high food cost. I asked them how much each of them spent on local advertising over the past month. It was about eight percent of their sales. I said that I spent nothing on local advertising, so my combined food and advertising costs were the same as theirs, but my sales were double to triple theirs. It was proof that I had done the right thing by running a higher food cost.

In 2000, my wife and I had a great offer for our two stores, so we sold them. I became a New York City EMT and Paramedic. I loved the job, but my family and I decided to move to Tampa in 2005, and I tried being a Paramedic down in Florida, but the pay was just above the poverty level. So we decided to give the pizza business another try!

On August 8, 2006, we opened our pizzeria in Downtown Tampa, and our sales were huge from day one. In our first year, we did over $1 million. Over the next few years, our sales continued to climb with little to no advertising. When you put out a great product, give great service, and do everything right to retain customers, word of mouth is about all of the advertising you will need.

Things were going well, but one day I came to work and saw my manager and one of my cooks
arguing over a half piece of chicken breast. Our chicken parmigiana hero recipe called for 1 ½ pieces of chicken breast, and the cook used two whole pieces. The Manager saw it and was irate, saying that it would kill our food cost. The cook said the two pieces were smaller than usual, so he decided to use the two pieces in their entirety. I stood there for an hour, listening to the two of them arguing over a half piece of a chicken breast. All I could do was ask myself repeatedly in my head, “Does my pizzeria that is doing over $2 million a year really needed to focus on food cost to this point?” After that, I told the crew to stop focusing on food cost and put more of their focus on making great food and great pizza. I told them this: if you make a great pizza, I will do a food cost analysis on that pizza’s ingredients and weigh them out, and I will charge a price that reflects its quality.

In July of 2017, we opened a second store in a small part of Tampa. Since our opening, four of the five pizzerias in that area closed. Our pizzeria, in an underpopulated area, does hundreds of thousands of dollars above the national average for an independent pizzeria. There are many reasons for this store’s success and for essentially putting other pizzerias out of business, but again I believe putting an emphasis on quality and big portions has helped it defeat the local pizzerias around it.

Unfortunately, a billionaire bought the building our first store was in and evicted everyone, so that store closed in 2018. In its last year, it was doing nearly $3 million a year. Yes, it ran a 36 percent food cost, but I was proud of the product we served. Even though the food cost was a bit higher than I liked, the fact that we did such great sales and spent nothing on advertising resulted in a very profitable store. We are constructing our new store nearby and hope to reopen in late May. Time will tell if we can recapture that magic and great sales that the first store had.

Yes, food cost is important, but never let it be the reason that you are not making money! With the current pandemic, cheese prices have fluctuated more than ever, so how can you control the food cost percentage when cheese prices have fluctuated so wildly? You cannot keep raising and lowering your prices with the fluctuations of the price of cheese to maintain an even food cost. So, what should you do? You can either create a pizza that you are proud of and then figure out the food cost on it and create a reasonable price for it, or work backwards and have a price that you want to charge for your pizza and then make the pizza cost fit into that price. I believe the first way is best.

RICK DRURY is the owner of Precinct Pizza in Tampa, FL