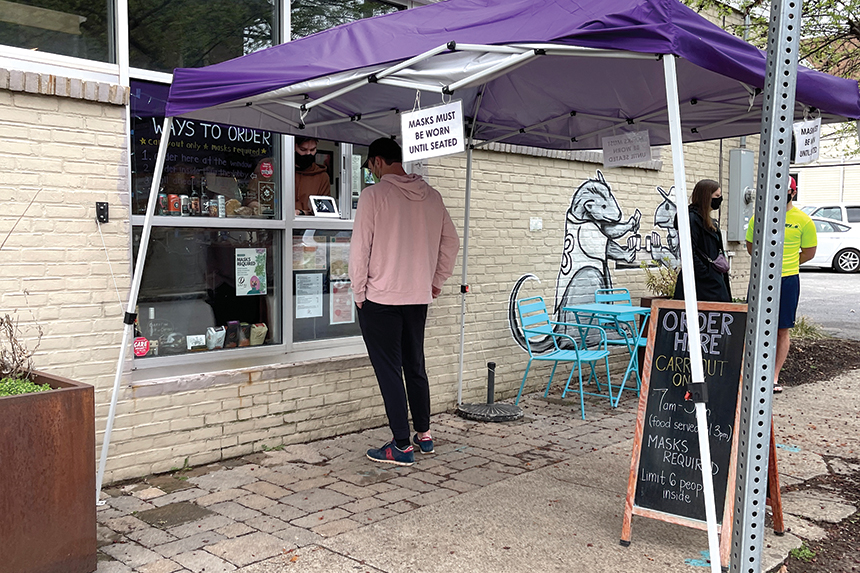 Pizzerias made infrastructure changes to push carryout, and many of these changes will remain as the pandemic recedes

There was much construction during the COVID-19 pandemic. For restaurants, much of the renovation was designed to enhance their carryout options. When dine-in was closed or limited, operators built takeout windows, improved their food displays, and reconfigured traffic flow. Pizzeria owners, already adept at preparing pies to-go, say many of the infrastructure changes were more than just a temporary fix. The new setups reflect a shift in how these establishments serve customers.

In Los Angeles, La Morra Pizzeria used to focus on events and catering, and often hosted pop-ups featuring a mobile wood-fired oven. “That world shuttered,” says Marlee Blodgett, co-founder and operator. The first weekend that events were canceled, they took leftover product, made par-baked frozen pizzas, and sold them through the pizzeria’s website.

After a few months of delivering frozen pies throughout the city, La Morra Pizzeria built a carryout window in an available space. “It was a giant restaurant that fed lots of people in different rooms, so it was not suited for the pandemic,” Blodgett says. “We operate in one side, the opposite side is a bakery, and we do pizza in the evening.” Customers order hot or frozen pies online, park in one of the two spaces out front, then pick up from the window.

Blodgett believes the pandemic has changed what consumers expect from restaurants, and that demand for La Morra Pizzeria’s carryout option, especially for hot pies, will continue even after the catering side of the business returns. People expect convenience, ease of ordering and to be able to walk up to a window and get back in the car, instead of driving around and looking for parking. “That’s going to be lasting,” she says.

Offering pizza from a takeout window is also a way to respond to other trends, including on-the-go snacking, eating anytime instead of three defined meals, and the popularity of smaller spaces as commercial rents rise. When Joshua Pollack, owner of Bridge & Tunnel Restaurant Group in Denver, opened Famous Original J’s Pizza with two walkup windows in 2018, he wanted to replicate the slice experience that he had growing up in the New York metropolitan area. “The ease of being able to walk up to a window has always been a cool novelty in New York,” he says. “I wanted to bring it to Denver.”

One window faces the patio, and the other faces the pedestrian-friendly street. The windows helped Famous Original J’s Pizza continue to serve pizza during the pandemic, and Pollack would like to have walkup windows in future restaurants. “It’s a way for people out and about to get food on the fly,” he says. “People are moving towards that model of, let’s grab a slice as we walk.”

For some, the infrastructure changes serve multiple purposes. When Paulie Gee’s in Chicago had to close its dine-in operations and offered takeout only, too many people were crowding into the restaurant to wait for their orders. “That became an issue,” says owner and operator Derrick Tung. “We didn’t expect that much support.”

To remedy this, the pizzeria set up a display case by the window. The case features four 20-inch pizzas on tables that are slightly tilted so passersby can see them from outside. Customers can select a slice, and staff reheats it in the oven. “We brought back an oven we had in storage,” Tung says. “We were getting ready to sell it because we upgraded the oven, but we ended up wanting to keep it.”

The window is part of a large, garage door-type wall of segmented windows, so the pizzeria also installed a sliding window in one of the segments, to pass the orders to customers outside. Also, the point of sale system was moved closer to the window. The setup provided other benefits when dine-in was shut down last year. “It gave the front of house team and bartenders something to do,” Tung says. “This option gave us the ability to create three to five positions for front of house staff.”

While the changes helped Paulie Gee’s stay open, it was not super-successful from a financial standpoint. “We were 85 percent dine-in and the average check was $35 to $42,” Tung says. “Now we are 100 percent pickup and to go, and the average check at the window is $12. The volume is not there, and alcohol sales are not there.”

The restaurant will return to dine-in when it’s safe, which includes factors such as vaccination rates and staff’s level of comfort in switching back to that format. Still, carryout will continue to be an important part of the business model, as Paulie Gee’s recently opened a second Chicago location that offers slices only and has a carryout window that could serve as a late night slice place. “The entertaining part is I watch people walk down the street, and then people walk back,” he says. “We’re seeing a lot of new guests who had not heard of us stop by.”

Windows are not the only changes to accommodate carryout. Square Pie Guys offers Detroit-style pizza in San Francisco. Owners Marc Schechter and Daniel Stoller recently opened a location in Oakland, and temporarily configured it for carryout. The large diamond-shaped room has stanchions to direct customers to one side and third party delivery drivers to the other side. “There was a domino effect when one driver would come in early and get in line when the order wasn’t ready, and all of sudden we have 20 drivers,” says Schechter, who is chief pizza officer. “We want to make sure our guests are not crowded out.”

Customers are encouraged to order online. When they arrive, there is hand sanitizer at the entrance. “People can walk up and sanitize their hands,” says Stoller, who is co-founder and chief operating officer. “We make it a requirement to hand food off.”