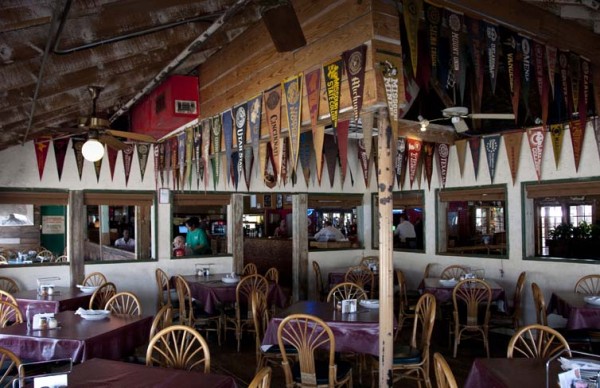 Granted, large crowds are a good business problem. Who doesn’t love being known for their pizza? That said, you and your staff may still get that deer-in-the-headlights expression when large dining parties hit your hostess stand at the same time.

But there are ways to manage large crowds and also have fun. Here’s how four pizza restaurants — of different sizes and serving different clientele — do just that:

• Make the large-crowd space into “the cool space.” Last year, a couple of local go-getters in Denver, Eric Hyatt and Craig Jones, bought Angelo’s Taverna from the original owning family. Their intent: To elevate the restaurant’s profile and maximize its party room and outdoor seating area for private events.

Out of the gate, handling large crowds was a challenge, Hyatt says.

“When we took over, there were old booths that took up most of the table seating. We didn’t have space for large parties,” he says.

So they reconfigured the restaurant, making simple cosmetic changes like putting a long booth across one wall with three facing tables, seating up to 16.

Then they took things one-step further.

“We were lucky enough to have a space used for storage, a separate little building which was a four-room, ranch-style little house,” Hyatt says. They gutted it, making it into one open room with 12 tables to seat 48. The two buildings sandwich a patio dining area, which unifies the eclectic spaces with umbrella-topped tables under a canopy of tree branches and ambient lighting.

One issue: smaller groups of diners felt isolated if they were away from the atmosphere of the main restaurant. So now the space is devoted to large groups, and that has made it “the cool space,” Hyatt says. “It gets more raucous and has more energy in that room with parties. It’s a nice way to handle the seating.”

• Go after the large groups on purpose. Iowa-based Pizza Ranch, a Midwest restaurant concept with more than 170 locations nationwide, is used to big crowds. They are dedicated to hosting charitable and community events that keep the place packed.

They have “community rooms” seating 20 to 60 and outfitted with TVs and AV equipment. They take advance reservations for the rooms and deliberately market them to business groups, PTA functions and sports teams. They also have breakfast pizzas and serve coffee for professionals to have morning business meetings, says Cody Pierce, VP of marketing.

This year, the chain expanded large group services by offering catering. This frees up the restaurant proper for regular diners and takes care of large groups that can still have their parties but at a site of their choosing, says Chris Peterson, who heads up the Large Group Meals program.

“Sundays are a difficult day in the restaurant. Then if you have a family reunion or group of 20 that wants to come, we’ll tell them, ‘We can’t reserve the rooms on Sunday because of our volume, but we’ll get the meal to you. You can have a picnic!’” Peterson says.
Which brings up another point: Proactively reach out to groups in advance to avert a crowd crunch on your busiest days.

“We work with managers to reach out ahead of time. We keep tabs in the area. Is a high school or college having a district meet and a sporting event? Don’t wait for them to show up. See if they want to come in,” Peterson says.

• Go for funky and fun. Settebello (Los Angeles) owner Michael Brooks happened upon a large-crowd accommodation idea by accident. He found Amish people to build community tables that seat up to 14 people.

“My parents were out in Missouri visiting a friend of the family,” Brooks explains. “I said, ‘I’m going to find me a table!’ In my mind, it was a community table, because I’d been watching a show, ‘American Pickers.’ My father mentioned it to the lady they were visiting, and she said, ‘My friends down the road can build you one.’ And they built us three. I went out there and put them on a trailer and brought them back. That’s how we started to accommodate larger groups.”

Not only do the tables seat larger crowds, but they also add to a familial atmosphere. “They’re beautifully built. The wood came off a 150-year-old building that was salvaged — 150-year-old Missouri white pine,” he says.

• Streamline stress with technology. Jay Jerrier is founder of Cane Rosso in Dallas. He uses NoWait, a wait-listing app. Customers can search for casual-dining restaurants in their area, add their name to a wait list from their cell phone and arrive the moment the table is ready.
Having the tool clears the hostess stand area, alleviating the stress over seating large parties, Jerrier says.

“We make notes on certain days. Say it’s Friday, and I want to make a reservation for 20 at 8 p.m. The manager pulls up NoWait and puts a note at the top that says, ‘No more reservations.’ We use it as a tool to manage the restaurant,” Jerrier says. “Someone can call up and say, ‘I want a reservation for six on Saturday, and I want the big table under the chandelier. We tell them we can lock down tables in two-hour intervals.”

Large parties can put everyone on edge, but Jerrier’s staff is prepared to handle whatever comes through the door. “Like today, I can look and see reservations for Friday and Saturday. Also, some people make reservations weeks out, and others, the day of,” he says.

Should your restaurant impose an 18-percent gratuity on large parties?

Find out what is more profitable for your servers, says Eric Hyatt, co-owner of Angelo’s Taverna in Denver. For example, during summer when large parties use his patio, many ask to pay individually. Customers are more generous, offering 20 percent tips rather than the 18 percent that would have been added to a group bill.

“With that in mind, the servers are taken care of a bit better, and 20 percent on $1,000 is quite a bit,” Hyatt says. “The only difference is that if it’s a set banquet, we will schedule a staff member for it. And in that case, we do add a gratuity.”