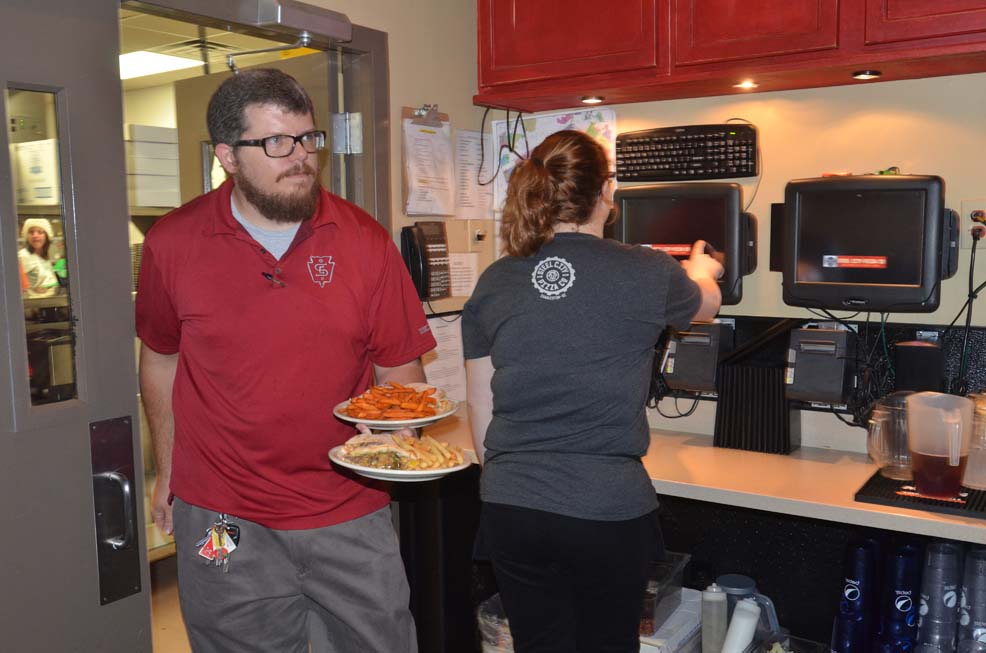 When Aaron Baumhackl, chef and co-owner of Solstice Wood Fire Café, relocated the restaurant to Hood River, Oregon, in December 2013, he consulted an expert about where to put the server stations.

“I needed more input from the floor manager,” says Baumhackl, who moved the eatery from Bingen, Washington, across the Columbia River. “I am trained as a chef so my experience is mostly on the cook’s end, so a lot of times I really should have involved her a lot more. She knows best about what’s needed for the flow.”

One of the first things Baumhackl learned was that he needed to install a point-of-sale system in the server station, and have additional POS systems in other areas of the restaurant. “Everybody needs to access that,” says Baumhackl, who owns the restaurant with his wife, Suzanne. “It should not be a point of congestion.”

He adds that the right shelving helps cut down congestion. If servers can easily access condiments, flatware and menus, that can prevent the bottleneck in a server station. The server station is next to the kitchen, so servers pick up the food, stop at the POS, then deliver the meal to the table.

The server station is the central hub that connects the front and back of house, says Luciano DelSignore, chef and owner of Bigalora Woodfired Cucina, with three locations in Michigan. It helps to have the station well stocked. “Always have extra share plates, silverware, olive oil and napkins,” he says. “The POS station is another important element. There should always be backup here as well, including paper rolls and check presenters.” Keep the area organized, DelSignore says, so staff can meet customer requests, especially quick, last-minute requests.

It’s always a good idea to get input from the wait staff before you decide where to install the server station. “All too often it happens backwards,” says David Gemmel, senior manager of productivity services for WD Partners, an architectural design and customer experience firm in Dublin, Ohio. “Usually the operator figures out how to fit a server station in leftover space.”

The location of the server station is critical, Gemmel says. “What we are trying to accomplish with satellite stations is reduce walking time between the dining room and back of house,” he says. “By reducing unnecessary delay, staff can work faster and be more responsive, and provide a great customer experience.”

Walking is non-value added time, Gemmel explains. In fact, WD Partners studied one restaurant client and found that servers spent only one-third of their time interacting with customers. By reducing the time spent walking back and forth to the kitchen, the restaurant was able to increase the amount of time the servers spent refilling beverages, cashing out customers who were finished with their meals and performing other customer-centric tasks.

Reducing walking can also help prevent some accidents, says Jackie Sheppard, general manager at Pizza by Elizabeths in Greenville, Delaware. “Walking through the kitchen at busy times can be dangerous,” she says. The solution for Elizabeths, which is decorated with portraits of famous women named Elizabeth, is to have a large server station with a window into the kitchen. The kitchen staff can pass dishes to the server through the window, and the server can grab extra napkins or salad dressing from the reach-in refrigerator before delivering the meal to the table.

The reach-in is upright so servers do not have to bend forward and has glass doors so servers can see inside. The refrigerator even contains some desserts, further reducing the times that the front of house staff needs to enter the kitchen. There is also a coffee machine and a soda machine at the server station, which Sheppard notes is quite large. “It’s really important for servers to have space to wrap up leftovers and plate desserts. I just think space is overlooked. If it’s possible for there to be a little extra counter space, no server will be upset about that,” she says.

She adds that it’s not enough to have a large station. It is also important to have the area well stocked, a task that servers need to accomplish before the place opens, and again before dinner. There should be plenty of paper products, as well as guest check pads and comment cards. The mugs should be next to the coffee machine and glasses next to the soda machine. There is another soda machine at the bar, but servers don’t need to use that one very often.

The opposite is true at Solstice. When the restaurant moved to its new location, coffee and soda duties were moved to the bartender. The coffee and soda responsibility was a topic of debate, Baumhackl says, but he decided it was better to let the servers focus on food.

“In the new location we added a bartender and we added food runners to allow the servers to serve,” he says. “We want a happy staff that can do their job well, that are not coming in feeling frustration and passing that on to guests.”

TIP: Look at this place!

The server station used to be an element that was hidden from customers, says Brent LaCount, principal with Design Collective Incorporated in Columbus, Ohio. Today, many restaurants are more casual, and customers can often see inside open kitchens. For some eateries, that means the server stations are visible too. If that’s the case, the area should be clean and neat.

“If it’s within view we want to make it look nice,” LaCount says. “There is a point where you can expose too much, but most customers don’t mind seeing glassware as long as it’s stacked neatly.”

He adds that the server station should be in a location that customers can see. “That keeps the servers closer to the customer, and it also maybe keeps them in line a little bit more, as much as servers congregate in a back room, which does happen,” he says. “If they are out in the dining room they have to be on their tiptoes more.”

Nora Caley is a freelance writer specializing in food and business topics. She lives in Denver, Colorado