Todd Parent has a good thing going. As founder and CEO of Extreme Pizza, this San Francisco businessman has found a way to grow a concept in lean times. While his company has taken a hit during the recession, Extreme Pizza’s boomtime marketing efforts have paid off. Parent and his staff worked hard during the past decade to develop a recognizable, sellable brand, and that distinction may well be what has enabled Extreme Pizza to grow while other companies flounder.

“We have nine corporate-owned stores and a total of 40 in our franchise system,” says Parent. “Same-store sales are looking like they’re going to be fl at for 2009. It would be the fi rst year in fi ve or six years that we didn’t grow same-store sales, but we’ve still found a way to grow the company despite everything that’s going on.” Extreme Pizza has opened four stores so far in 2009, and Parent says he’s hoping to have three or four more open by the end of the year.

“It’s actually been a promising, good to- strong year considering everything we’re reading and hearing about,” he says. “We just opened a corporate store in San Ramon, which has been nice. In this economy, it’s nice to still be growing.”

Since it began pursuing franchising, Extreme Pizza has evolved from a northern California company to a pizza chain with stores in seven states, including East Coast locations in Virginia and Florida. It’s even gone international with a unit in Kilkenny, Ireland — though that wasn’t necessarily planned.

“We knew a lady who had been working as a marketing manager for GAP, and she had been working over there (in Ireland),” explains Parent. “She wanted to do something over there and approached us about it. So it sort of fell in our lap.” Most of Extreme Pizza’s franchisees, of course, don’t sign up so coincidentally.

Some may initially inquire about a store on a whim, but they are sorted through in the corporate office and only the most promising candidates are selected for store ownership. When asked what he looks for in a potential franchisee, Parent stresses there is no single factor that ensures a partnership between applicants and Extreme Pizza.

“It’s a combination of everything. Restaurant experience is nice, but the business skills can transfer from retail, too,” he says. “Restaurant skills are always important, but not necessary. Our processes are different than our competitors in the restaurant industry, but any type of background in this industry is helpful.

“Then, of course, there’s the financial component. Do they have access to capital or the wherewithal on how to raise it?” A new Extreme Pizza location costs between $300,000 and $400,000. That would be for a build-out in a stripmall location — Parent says he avoids freestanding locations due to cost.

“It’s significantly more than a conversion, but it’s still reasonable and in line with some of our major competitors,” says Parent. “For a conversion, including the franchise fee, all in, it’s about $75,000 to $100,000 depending on existing assets. So, it’s very affordable and attainable.”

Adds Parent: “It’s somewhat of a capitalintensive business, but if you do the marketing right and follow the systems it’s a very nice cash-fl ow business as well.” The average guest check at Extreme Pizza is $9, and 75 percent of the company’s sales is attributed to pizza. Delivery accounts for half of Extreme’s sales, while dine-in and carryout are equally split at 25 percent each.

The menu at Extreme Pizza offers whole and slice pies, as well as sandwiches, salads, calzones and wings. Beer (80 percent of alcohol sales) and wine (20 percent) are also available. Parent says the menu is evaluated regularly to ensure it performs well. “We always try to keep our menu unique and current,” he says. “We try to add a pizza or two a year, and at the same time make sure the offerings don’t become too overwhelming.” Lunch accounts for up to 30 percent of Extreme Pizza’s sales, and Parent says catering and individual pizzas, more than slices, are the reasons for that. “By-the-slice is not a main driver, but it’s a great offering for someone who’s on the run,” he says. “On the other hand, our individual size offering, which is an eightinch, is moving a lot. It seems to have a little more cache or attraction for whatever reason. Plus, we do a lot of catering. We try to keep a diversifi ed mix between catering, eat-in, commercial and residential delivery so that we’re not banking on any one segment too much.” 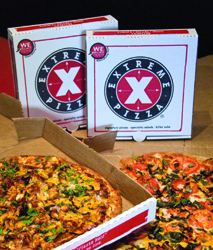 Catering accounts for 10- 15 percent of Extreme Pizza’s business, and Parent says his catering program has been a fixture for several years and is a key component to his company’s success. “It comes down to a lot of pounding the pavement and guerilla marketing,” he says. “You have to let people know you’re in the catering market and that you deliver. It’s always great to start off your day with big sales in the till before you open. When we look at new locations and areas, we’re looking for that trade, we’re looking for the office parks and the lunchtime day trade as well as the rooftops.”

Extreme Pizza built its catering reputation the old fashioned way, says Parent: “We were aggressive on giving away free product. We do a lot of sampling, and you always have to back up a highquality product with great service. To this day, we’re still making cold calls and still following up with existing customers to make sure that they like everything and that the order was to their satisfaction.” Though the corporate offi ce has employees that focus on catering, Parent says the stores are required to get involved at the ground level as well.

“A minimum of six times per week they have to reach out on their own to set up corporate comps,” he says. “They’ll give away multiple pizzas or free sandwiches and salad so that a corporation with a couple hundred people are trying a good variety of our offerings. “Typically, people say, ‘What’s the catch?’ Well, there is no catch. We believe in our product and service, and if you like it we’re just hoping you’ll try us next time you need to set something up. That continues to prove to be a great way to retain business and get new customers.” ?