If you had to classify Tampa using one phrase, the term “melting pot” would certainly be accurate. That’s because the warm climate, sand and surf are a Mecca for retirees and Spring Breakers alike. That’s what brought Philadelphia native Robert “Bob” Vasaturo and his Philly-themed pizzeria to the area 15 years ago, and it was a good move –– today the $33 million company has 44 stores throughout Florida and has just sold the franchising rights for the state of Ohio. A planned 117 units are expected there.

So, why Tampa? Explains Vasaturo, who originally came to visit a friend at a nearby Air Force base: “15 years ago, there was nothing here. There was no pizza, no sandwiches, no cheesesteak; and being from Philadephia, that’s all there is (there). I came here trying to bring a taste of Philly to Tampa, and it worked. It’s amazing how many people were from up North. Tampa’s like a melting pot. Everyone’s from somewhere else.” 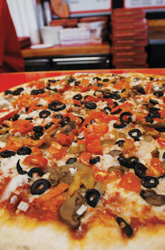 Having worked in a pizzeria in his youth, he harkened back to those learning days –– making pizza at the tender age of just 13 –– and opened Westshore Pizza. He opened his second store just two years later. “I was scared,” he admitted. “I opened the second one fairly close to here and I was scared help-wise. I didn’t know anybody, and no one knew how to make my pizza. We make it on a peel in an oven. We stretch it. So, we took a chance. I had one gentleman who knew how to make the pizza. We (opened the second store), and everyone responded to it. It just took off.”

And Westshore doesn’t try to be anything more than what it is –– good food at a good value. It’s known for its slice special –– two oversized slices and a drink for $5, which Vasaturo has offered since 1994. “We’ll sell 60-plus slice pies before 1:30” p.m., Vasaturo says. 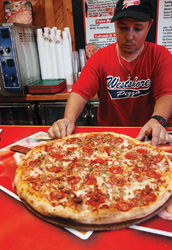 The company prides itself on its hearty portions and fresh ingredients. Dough and sauce are made in-house and cheese is grinded and vegetables chopped fresh. Why no commissary? “The recipe to make the dough is real easy,” he says. “Other than that, the food’s just the same. We use the same sauces, we have our spice packs … so it’s consistent that way. We use the same mozzarella.” Aside from that, Vasaturo has a good working relationship with his distributor –– which services most of the country and helped foster expansion and maintain consistency as the company grows –– and he keeps costs down by buying in bulk.

The average guest check sits at about $15. Twenty of the 44 stores are carryout and delivery only. Dine-in accounts for 35 percent of business in the restaurants that offer it. 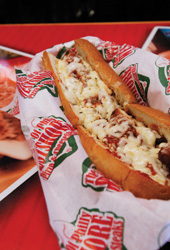 The pizza at Westshore is “New Yorkstyle with a Philly twist” –– its thin and chewy crust is hand-stretched and toppings are applied liberally. Favorites include the White Spinach Ricotta ($13.49 for a 14-inch pie) and the Meat Lovers ($14.50 for a 14-inch).

Sure, there are sandwiches, and you’d be hard-pressed to fi nd a better traditional cheesesteak sandwich outside of Philly, Vasaturo says. “Something we do that nobody else does is just like in Philly, we liquefy down our American cheese, which makes the sandwich head-and-shoulders better.”

Another signature offering is its allday 98-cent 16-ounce drafts (and yes, we saw a patron enjoying a beer and free Wi-Fi at 10:30 a.m.). “It’s a loss leader, but I don’t want to make any money on the beer. I want people to come in and eat, and it’s working. We’re selling 17 to 20 kegs a week now (at the fl agship store). We started out with two or three kegs a week. … Beer and pizza are just awesome together.”

Marketing is done at both the store and company levels, with some television, radio and newspaper advertising. But for Westshore, door-to-door menuing is the “cheapest and it’s the most effective,” Vasaturo says. “It’s amazing. If you send four people out an hour a day and go menu businesses and homes, you get the best response.” 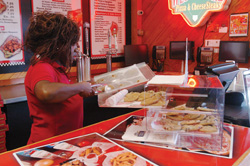 Still, he couldn’t buy the type of publicity a national news story garnered his company earlier this year when local resident Ed Graziano (father to John Graziano, who was injured in a car crash caused by Hulk Hogan’s son, Nick) attempted to hire a man to kill his wife for $2,100 and a Westshore Pizza gift certifi cate –– worth just $13.06. He was contacted by national news outlets but declined to discuss the case with media, given its sensitive nature. Still, you can read all about it in the articles on the case mounted on the wall.

So what’s the next step? When Pizza Today last visited Vasaturo in 2001 he had just 18 units and no widespread plans for rapid expansion. “I never even meant to franchise,” Vasaturo says. “I just wanted to open one store and it just kind of evolved to where we’re at now with 44 stores.”

To date, two units have opened in Ohio and a developer has signed an agreement for a total of 117 Westshore Pizzas throughout the state. “I didn’t know this, but Ohio is where everybody goes to test a franchise,” Vasaturo says.

He’s still content to be in-house every day at the fl agship store in Tampa but realizes his company has evolved outside of his immediate control. Vasaturo credits one move for his initial expansion: because he couldn’t source bread for his Philly-style sandwiches, he approached bakery managers at a local regional grocery company to bake his bread. 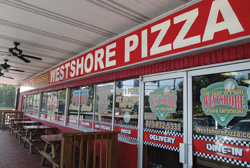 “I got so busy as I opened the third store, the fi fth store, the sixth store that the guys in the bakery cashed their (personal) stock in. They wanted to buy stores, and that’s what they did. That’s how I got to 15 stores quick, before I even franchised,” Vasaturo says. (Subsequently, they’ve built their own bakery in St. Petersburg to furnish the stores with Westshore’s signature bread.)

Despite an ailing economy, Vasaturo feels confi dent in his focus on franchising. “I just think it’s the time,” he says. “A lot of people that had other careers, they don’t know what to do. Their stocks are gone, their 401Ks are gone … you can buy a Westshore franchise for $150,000 soup to nuts.”

Is it diffi cult for Vasaturo to relinquish control as his company grows? “It’s real diffi cult,” he admits. “The one main thing that I want to stress is I always want this to be a ‘mom and pop’. I don’t want to commercialize it. With the (larger chains), everything’s cookie cutter. With us, it’s really homemade. I don’t want to say it’s different every time, but it may look different … They’re all handmade. It’s not from a commissary –– it doesn’t come in already stretched for me and you just put it in one oven and it comes out the other side, … A lot of people, I think, can see that. I don’t want to be corporate America.”

Essentially, each store runs independently –– and rather than taking a percentage of monthly sales, Vasaturo takes just a $600 fl at fee from each unit. He wants his company to be affordable and attainable, unlike others on today’s franchise market. Each franchisee takes a three-week training course at Vasaturo’s fl agship store. “Business, to me, I think it’s a trickle effect. (Potential franchisees) who went to the Olive Gardens and the Maggiano’s (Little Italy) –– all the higher-end restaurants –– they can’t afford it. They kind of trickle down” to more affordable franchises, Vasaturo says. And the fact that his menu offers more than pizza will be attractive, he hopes. 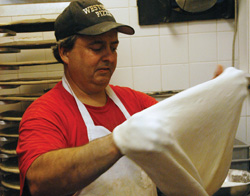 And with a stagnant economy, diners can’t afford to eat at more expensive table-service restaurants. Business, Vasaturo says, is good. “With the economy being bad, diners aren’t going to the Olive Gardens anymore or ordering a higer-end pizza. It’s helping us.