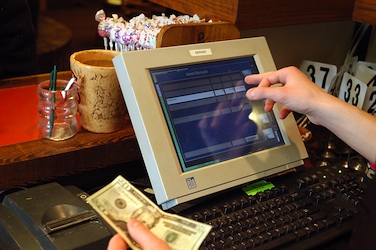 Robbery preparedness and prevention training could save lives

One chilly November night, two employees working late at a suburban Milwaukee pizzeria decided to step out for a cigarette before cleaning up for the night. Within a split-second after opening the back door, they faced a gun barrel and three men. The trio forced the employees back inside, where the gunman pistol-whipped one employee. The robbers ran off with more than $2,000 and left behind two shaken people.

Too often people don’t think about robbery until it happens, and then it becomes top of mind,” says Matt Martin, franchise training leader for Toppers Pizza, with 36 locations in eight states and headquartered in Whitewater, Wisconsin.

Toppers Pizza keeps robbery preparedness and prevention on the radar. “It’s part of our training for everyone we hire,” Martin says. “Our main message to employees is ‘give the robbers the money. We can make more money tomorrow, but we can’t replace you.'”

Security training experts emphasize that a robbery is no time for heroics. Unfortunately, an occasional news story pops up about an employee who fought off an armed robber and became a local hero. Experts emphatically recommend against such actions.

“In most commercial robberies, employees aren’t injured as long as they cooperate,” says security consultant and trainer Chris McGoey of Crime Doctor in Los Angeles.

McGoey advises against owners keeping a gun in the restaurant. If a robber has a gun pointed at you, you’re not going to retrieve yours fast enough anyway, he explains, and quick moves may startle the robber into shooting you. Plus, if other employees have access to the weapon but lack a cool head and gun-handling skills, they could set off wild shots that injure others inside the store or out on the street. By introducing another weapon, “you’re bringing more violence into an already potentially violent situation,” McGoey says.

Untrained, panicky employees also can trigger violence inadvertently, says John Moore of Armed Robbery Training Associates in Spokane, Washington. He points to an incident in which a man entered a pizzeria brandishing a knife and demanded the cash register be emptied into a pizza box.

One of the two employees at the counter dashed across the room to grab a pizza box. Thinking the employee was running to hit an alarm or call police, the robber lunged for the cash in the register. In the process, and probably by accident, he badly cut the other employee on the arm as she was emptying the till.

“What the first employee should have done,” Moore explains, “is say, ‘I’m going to walk over there to get a box and come right back.’ People get hurt or killed because nobody trained them in what to do and what not to do.”

Besides coaching employees in robbery survival, train them in practices that make your restaurant a less appealing target. Here are a few procedures recommended by security experts:

Your restaurant’s physical features can attract or deter robbers. “They look for easy escape routes and dimly lit areas,” says Furlishous Wyatt, business security specialist with San Francisco SAFE, a nonprofit crime prevention organization. “That’s why you should have a security specialist or someone from your police department come out to your restaurant to look at the lay of the land.”

Wyatt advises keeping windows clear of signage, shrubbery and other obstructions. “Create a fishbowl appearance,” he says, “so employees can see out, and passing patrol cars and citizens can see in.”

Surveillance cameras, prominently announced, also make robbers think twice. Consider placing a monitor in the front of the house so people immediately see they’re on camera when they enter. Wyatt suggests placing a camera at the front exit, too, and aiming it to catch a shoulders-and-up image of anyone leaving. Other cameras up in the corners may miss such images if robbers wear hats and hoods. If they have masks, they’ll usually remove them on the way out to avoid drawing attention on the street, and you’ll get a picture.

Silent alarms are another security tool. Put them in several strategic locations — under the front counter and in the kitchen, office, storeroom, cooler and so on. Be sure employees know to activate an alarm only if they can do so unnoticed.

Finally, one of the best robbery-prevention weapons is vigilance. Train employees to spot anyone who’s hanging around inside or outside and perhaps casing the place. “Follow your instincts,”

Wyatt says. “If the hairs on the back of your neck stand up, something is wrong. Call the police.”

Dianne Molvig is a freelance writer in Madison, Wisconsin.