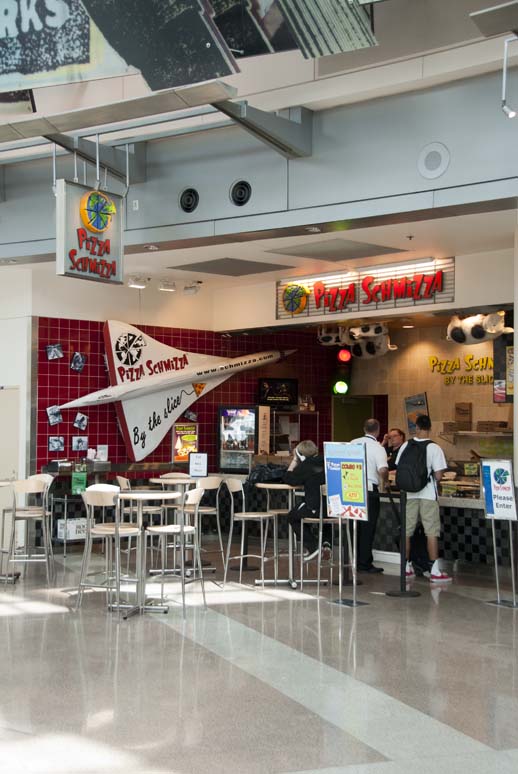 When it comes to expansion, think outside the strip mall

Opening the second Pizzeria Piccola location, at Mitchell International Airport in Milwaukee last month, was a success — despite enduring a smaller footprint and catering to a new audience. That’s because the brand was firmly in place.

Despite having just 25 seats, the new location in Concourse C is reminiscent of the two-story original in Wauwatosa (a Milwaukee suburb), which has sit-down seating, an outdoor patio and a home-y feel. It opened in 2003.

“Pretty much every time I’m there I run into some of our customers who are flying in and out,” says John Wise, director of operations for The Bartolotta Restaurant Group, which owns Pizzeria Piccola. “They appreciate having good food options at the airport.”

Locations for pizzerias that are on college campuses, in airports or within amusement parks or professional sports stadiums are usually leased by large companies, such as SSP America or Aramark. SSP America owns the new space inside Concourse C, yet it is staffed and operated by Pizzeria Piccola. “They gave Joe (Bartolotta, the restaurant group’s owner) total control on the design and the type of equipment that’s used,” says Wise. Ensuring a smooth opening, with as SouthSide Pizzeria located in the Chicago Midway Airport terminal When it comes to expansion, think outside the strip mall few kinks as possible, Wise put seasoned Bartolotta employees in charge of the new location. “There is a Margherita pizza at the airport and there is a Margherita pizza in Wauwatosa,” he says. “It should be the same Margherita.”

In addition to pizza, gelato (from Cold Spoons Gelato in Milwaukee) and cocktails are sold at both locations. Yet the airport location needed unique items for on-the-go customers. Breakfast sandwiches and a breakfast pizza were added. Pizza sizes and selections are the same. Duplicating the menu avoided the cost and time it would have taken to develop new offerings.

Streamlining the existing menu was a tactic that worked for Hungry Howie’s Pizza, however. The company operates locations inside three Detroit-area entertainment venues — Ford Field (home to the Detroit Lions), DTE Energy Musical Theatre and Palace of Auburn Hills (where the Detroit Pistons play, and circus performances and music concerts take place) — as well as Detroit Metro Airport.

“You need to serve them fast and you need to serve it hot,” says Jeff Rinke, Hungry Howie’s vice president of marketing. Just pepperoni and cheese pizzas are offered, and in an 8-inch size, although at the airport full-size pizzas with customized toppings can be ordered. The pizzeria normally offers a choice of eight crust flavors, but to keep things simple, only garlic-herb crust is offered at the entertainment venues and airport.

Hungry Howie’s Pizza hires consultants to do unannounced spot checks to ensure the quality is consistent. “We don’t want to enter into an agreement where we’re serving a product that’s not a true representation of our product,” says Rinke. “The product is 100-percent Hungry Howie’s. It’s all our ingredients, it’s our sauce, it’s our dough and it’s our cheese.”

John Arena, who is one of the three founders of Metro Pizza in Las Vegas, which has three sit-down locations, visits each of his two non-traditional locations (inside a casino and on a college campus) daily. Doing the prep work off-site, and at one location, avoids inconsistencies in flavor and quality. “There isn’t going to be a difference in the dough, because we’re pulling dough out of inventory,” he says.

Problems can erupt, however, when there is not good synergy and respect between the operator and the owner. Arena found that out the hard way. Four years ago a Metro Pizza location opened inside Boulder Station Casino. It didn’t last long: in December the casino took over the ownership and operation of Metro Pizza and shut it down.

“It succeeded to the point where the food and beverage department at the casino wanted to take it over,” he says. (Slices is the casino’s new pizzeria.) “You have to be very careful in how they write the lease — no pun intended, but they’re holding all the cards. Their justification is that the casino environment is always changing. With these casinos it’s all about relationships.”

Metro Pizza has operated inside Ellis Island Casino since 2000. The casino views the pizzeria as a partner — even going so far to include them in promotional opportunities. “They see us as an additional option for their guests. They’re a true collaborator and advocate for us,” says Arena. With just 200 square feet, the location earns around $1 million in sales each year. “It’s basically a counter with an oven,” says Arena.

For established pizzerias scouting non-traditional locations, “you have to evaluate what kind of match-up your customers are with what your brand represents,” he says. That Ellis Island customers are mostly locals that are already familiar with the Metro Pizza brand.

It’s that familiarity that has allowed Metro Pizza’s University of Nevada Las Vegas location, which opened in 2010, to prosper. “Many students grew up in Vegas. When they see us on campus we have credibility,” he says. Metro Pizza actually replaced the in-house brand, which lacked recognition with students and wasn’t raking in a profit.

Like Pizzeria Piccola, only employees familiar with the brand work in the satellite locations.

Space challenges aren’t as much of an issue as they appear, says Rinke. Each Hungry Howie’s Pizza store is normally 1,200 feet, but the non-traditional locations range in size from 400 to 800 square feet. The typical set-up is simply condensed, with a reduced-size oven, and a smaller area for food preparation. Some feature more than one stand (and at Ford Field some of those are shared with other vendors).

“The concourse is your lobby and you don’t need restroom facilities,” says Rinke. “There is also off-site storage.”

Kristine Hansen is a freelance writer living in Wisconsin.