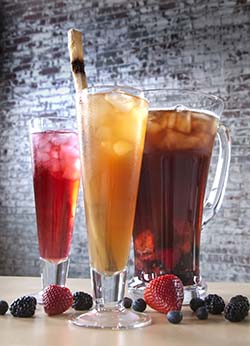 Iced tea has its place in America. It has its own holiday in America, even. While the official first day of summer happens weeks later, National Iced Tea Day fittingly kicks off the season on June 10.

There are varying accounts of the origin of iced teas in the U.S. One popular take is that weather conditions at the 1904 St. Louis World’s Fair were so hot that attendees gravitated to anything served ice cold. An Indian tea merchant chilled his black tea to please thirsty fairgoers, and a tasty, cool beverage option was born.

America is known as a coffee drinking country. Though in the past 15 years, tea has gone from revenues in the low hundred millions to a $3 billion industry, says Joe Simrany, president of the Tea Association of the USA, Inc. Americans drink more than 50 billion servings of tea a year, and 40 billon of those are served over ice.

Iced tea made the National Restaurant Association’s “What’s Hot in 2012” list with specialty iced teas (e.g. Thai style, Southern, or flavored) making the “Top 100” at No. 77, as well as coming in No. 2 in the nonalcoholic beverage category behind house made soft drinks/ sodas.

A great appreciation for tea, Simrany says, “is resulting from the fact that consumers are recognizing that it not only could taste good, but it also has some very good health benefits for you, as well.” Unsweetened tea has received rave reviews as a low-calorie drink packed with antioxidants, making it a viable marketing opportunity to tantalize health-conscious diners.

Convenience is a factor with the increasing consumption of ready- to-drink varieties of iced tea available by the can or bottle, Simrany says. In fact, he adds that the ready-to-drink iced teas are an easy option for restaurants.

“There is no preparation necessary. All you have to have is a cooler.”

Black tea is the most widely used ingredient, and operators can serve it a few different ways. It can be served:

Nonna Mia in New Orleans, Louisiana, serves fresh brewed iced tea and owners Alessia Lepanto and Kathleen Turpel wouldn’t have it any other way. “There is no substitute for house brewed tea, period,” says Turpel. “Fountain tea tastes syrup-y and bottles are wasteful. Factor in the unit price and you’d be crazy to go any other way.”

Fresh-brewed tea costs pennies to produce and offers the lowest food cost compared to soft drinks or coffee. Many shops charge $1.50 to $3 per serving. Restaurants can brew tea by the gallons with an iced tea brewer, which can run from $300-$700 depending on features. “Yes the machines are large and some elbow grease goes into cleaning the urns,” Turpel says. “But, some good things shouldn’t be easy.”

Iced tea is big in the South. The Northeast and the South have the country’s highest concentration of tea drinkers, according to the Tea Association. “Iced tea kind of sells itself in the South,” Turpel says.

If house brewed tea itself isn’t enticing enough at Nonna Mia, “Add some delicious Italian lemon ice (sorbet) and bring it to a table,” Turpel says, “and five other people want to know what it is.”

In addition to its house-brewed iced tea, which sells for $1.75, Nonna Mia features a Limonata Iced Tea with a scoop of Italian lemon ice for $3. It’s also available with a scoop of raspberry or mango sorbet.

Ray McConn, owner of Mother Bear’s Pizzeria in Bloomington, Indiana, also believes you should provide something a little extra with iced tea. He offers a house brewed iced tea for $1.95. But, for $1 more per flavor, his patrons may add strawberry, peach, raspberry, vanilla or cherry syrup. “We pay $5 per bottle (of syrup), with 25 ounces per,” he says. “That’s an ounce or two in a 32-ounce glass. It costs 30 cents for that $1 sale.”

Mother Bear’s doesn’t have room for both unsweetened and sweetened iced tea containers. McConn says the fruit precludes the need for a sweetener.

For an added touch, he includes a couple pieces of frozen fruit if it’s available to match the syrup. With the syrups and frozen fruit, the flavored tea’s food cost is comparable to other soft drinks.

The key, McConn says, is increasing ticket sales and adding to the restaurant’s gross profit.

McConn says that he also learned a valuable lesson about iced tea. He previously sold what he called “bag in a box” iced tea, but tea fans in his pizzeria didn’t take to the premade version. “We catered to customer demand to go to fresh brewed.”

Bar Tip: For those who serve alcohol, try infusing your vodka with iced tea and fruit to create a refreshing cocktail.