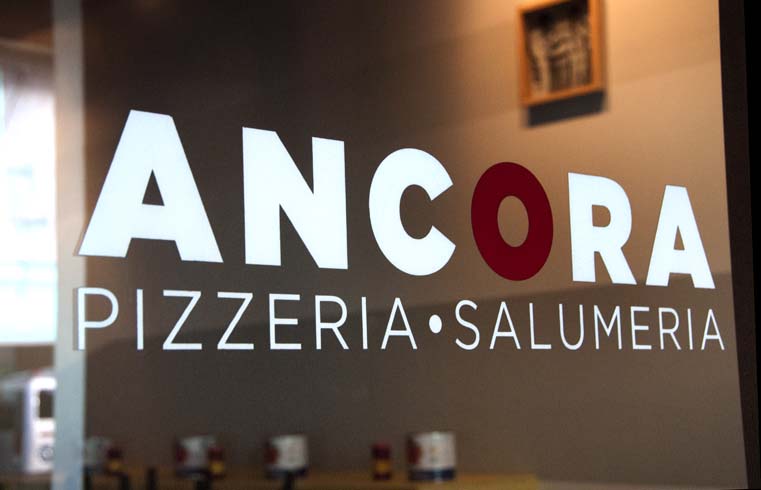 “Ancora, the name means ‘again’ in Italian,” Talbot says. “We use that term in the sense of reusing.” The theme reverberates throughout the Neapolitan style pizzeria, from the sentimental touches in its interior to its restored location.

Pizza Today traveled to the Crescent City in December to visit Ancora and sit down with Talbot. Prepping for its dinner service, the pizzeria was filled with the aroma of roasting vegetables wafting from its handcrafted dome wood-burning oven, imported from Naples, Italy — a showpiece of the Neapolitan craft. The front of the restaurant is lined with windows and dark, rich wood benches. The same reclaimed wood continues through to the tables, bar and a butcher-block lining the front of its open kitchen makeline. Talbot salvaged the lumber from a historic home in the Bywater area of New Orleans.

“There is a little bit of sentimental value in everything in here,” Talbot says. “The cargo lights came from a casino that sank during the hurricane.” Talbot’s father-in-law made the intimate wine bottle lights that hang above the bar.

Talbot has built a successful career in fine-dining restaurants in the U.S. and Europe, including a Michelin-starred restaurant in California. Baking became a true passion for Talbot. “I fell in love with pizza and was doing it on the side,” he says. When he moved back to his home state of Louisiana, he built a backyard pizza oven — some sources report that it’s a $10,000 unit. “I was making pizza twice a week, then three times a week. I became really obsessed with it,” he says.

Enter chef and restaurateur Adolfo Garcia, who has built an empire of successful restaurants in New Orleans. The two partnered to open New Orleans’ first Neapolitan pizzeria on Feret Street, in conjunction with the opening of a neighboring restaurant also backed by Garcia. Both opened in the spring of 2011 to plenty of media fanfare.

Talbot and Garcia saw potential in the uptown area of New Orleans in its early stages of redevelopment when selecting a location for their Neapolitan pizzeria concept. Talbot was a little hesitant at first as he remembers driving by Ancora’s future home on Feret Street, thinking ‘absolutely no way.’ There were no streetlights yet and one lone revitalized cocktail bar sat down the block.

The Feret Street investment soon paid off. Today, the district has blossomed into a dining hot spot. The neighborhood even received a cultural district award from the Louisiana Office of Cultural Development in 2013.

When Ancora first opened, Talbot says he spent a lot of time educating new customers about the Neapolitan style, so new to an already populated New Orleans dining scene. He says it was important to “try and create this clear division from what we do and what you’ve been eating forever.”

The pizzeria’s Web site and a chalkboard wall lining a back hallway to the restrooms outlines “Neapolitan Pizza Rules” in accordance with the Association of Vera Pizza Napoletana.

The New Orleans community has embraced Ancora’s Neapolitan pizza. The pizzeria generates close to $1 million in annual sales. “That’s good for a restaurant that is only open six days a week and only for dinner service,” he says.

Sales have increased 40 percent from last year’s numbers, Talbot says, crediting the bump in sales to Ancora’s consistency and quality. “When we first opened up we had the idea of about a $22 check average and that’s really low for us,” he says. “On a bad night it’s $25. And on a good night, $32.”

Ancora maintains a small, focused menu. “We typically have one salad, one bruschetta, four to five contorni, a pizza or two as a daily pizza and then our salumi program,” Talbot says.

Its pizza menu consists of Neapolitan standards like the Margherita, Bianco and Marinara. The daily specials during Pizza Today’s visit included a pizza topped with ricotta, broccoli rabe, garlic and fennel sausage for $16 and The Maria with mascarpone, tomato sauce, arugula and lonza (a cured pork loin) for $18.

While its Neapolitan pizza staples are imports from Naples, much of the rest of the menu is locally driven — as much as 90 percent coming from area farms. Just how local? A $2,000 local whole pig was delivered the morning of the Pizza Today visit. Talbot says the restaurant goes through two whole acorn-fed pigs each month just for its cured meat products. The arrival of the pig can wreak havoc on Ancora’s food costs, he says, but it evens out and ranges from 23 to 28 percent.

In addition to its elegant, tiled oven, Ancora’s salumi curing room is a focal point for diners. Various salumi, prosciutto and coppa hang in full view of the open dining area. “We try to showcase the quality of the pork we have in the area.

“We make our version of pepperoni,” Talbot says, inspired by salami made in the Campania region of southern Italy. “It’s got some spicy chilies, sweet chilies, anise and mustard seed in it.” A half of a pig each month is devoted to its pepperoni.

The curing room allows Ancora to expand its patrons’ appreciation for atypical cured meats, like lardo —a salumi made by curing strips of the fatback (an area of fat under the skin on a pig’s back) with herbs and spices, and Sanguinaccio — cured blood sausage.

“Whether we are baking bread, making pizza or making salumi, it’s about crafting something from one really good ingredient,” Talbot says.

Anything that Ancora can make in house at a high quality, Talbot says, they make it. From its cured meats and vinegars for salads to ice cream made from local cream. An exception is its cheese. Instead, Talbot opts to procure high-quality cheeses. “We leave it up to people who are much better at it than we are,” he says.

The demand for quality also shines through to its popular alcohol program. Up to
30 percent of Ancora’s sales derive from alcohol. The pizzeria offers 12 beers on tap — mostly craft beer, a limited wine list from the Campania region of Italy and handcrafted cocktails.

Talbot has noticed an increase in liquor sales. In the past year, he has doubled the size of Ancora’s liquor selection. A popular cocktail, the Ancora Old Fashion with Amareno cherries, Peychaud bitters, Bulleit bourbon and Satsuma Cello, sells for $9.

Quality drives traffic, Talbot says. “It’s word of mouth and consistency,” he says. “We don’t do any marketing at all. I think it’s a poor investment. It’s hard to tell what is actually giving you business. The time that you spend in being consistently good is a much better investment than the money you would spend in marketing yourself.”