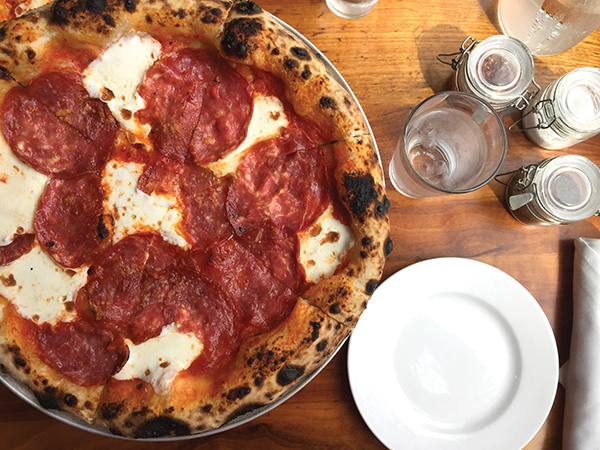 The Boston pizza scene is amongst the nation’s best

Kendall Square in Cambridge sees a cross-section of foot and automobile traffic, making it an ideal spot for restaurants seeking to serve MIT students and the general public alike. Area Four is a nice addition that elevates Boston’s already-strong pizza game.

A4’s wood-burning oven is the centerpiece of the  restaurant’s design. It turns out simple pizzas such as the “Not Pepperoni” (pictured at left, this pie features sopressata, mozzarella, tomato and Pecorino). But while pizza is the star of the show, the diverse menu also offers sandwiches, salads, soups and small plates at lunch. At dinner, A4 also serves chicken, fish, pork ribs and a variety of vegetables.

Complete with a bar and coffee service, Area Four captures a wide audience and is one of Boston’s best pizza finds.

Those craving a Neapolitan pizza when in Boston need look no further than Locale. The small location has limited seating, but any wait on a busy evening is well worth it. The “Parma Due” pizza (prosciutto, arugula, mission figs and Gorgonzola) packs a flavor punch that is not to be missed. Ditto for the “Meatballs Al Forno”.

In an area blessed with older eating establishments and bakeries that have been around for generations, Locale is a fresh and vibrant newcomer to the North End scene. The eatery puts a lot of thought into providing customers with basic dishes comprised of simple, high-quality ingredients that honor Italian and American dining heritage alike.

No wonder Boston Magazine said Locale was one of the city’s best 21 places to eat pizza. We agree. We wonder how Beantown ever got on so well without it!

Pizza Today has visited Emma’s a handful of times over the past two decades. Why? Because despite all the options available in the pizza world, sometimes you just need a large, foldable slice to get you through the day.

This isn’t New York pizza. It’s basic, no frills, traditional American on a thin, crispy crust. And to many in Cambridge, it’s simply divine. Which is why dining here is, for many in Boston, a rite of passage.

Emma’s offers more than slices, however. Whole pies, salads, sandwiches and appetizers (the goat cheese crostini is a winner) make sure there’s a little something for everyone.

As for the pizza itself, there’s nothing wrong with a straight pepperoni slice. But we were intrigued with the “Hasty Pudding Pie” (baby spinach, roasted sweet potato, caramelized onion, garlic, rosemary sauce, mozzarella and goat cheese).

This North End stalwart stands the test of time. Opened in 1926, Regina Pizzeria is as old-school as it gets. It’s a no-frills establishment … a little worn, always busy, filled with locals and tourists alike.

The servers race to and fro, filling drinks and delivering piping hot brick-oven pizzas that are cut into gigantic, greasy, foldable slices. Much like Emma’s, this isn’t New York pizza, but it’s not far off.

Over the years Regina has grown to 17 locations, many in malls and other non-traditional outlets. But the original (right) remains worthy of the praise it receives. When you keep it simple, it’s difficult to mess things up. The original location keeps it simple.

Of course we had to try a pepperoni pie while we were there. But we were more smitten with the “Spinaci E Pomodoro” (fresh spinach leaves, cherry tomatoes, Pecorino Romano, mozzarella, fresh basil, garlic and oil).

This one is off the beaten path.

Boston’s North End is a smorgasboard of options when it comes delis and bakeries. Monica’s Mercato Pizza is tucked away in a basement below an Italian grocery and deli that offers meats, breads, cheeses and sandwiches, among other things. A door on the side of the building leads customers down a flight of steps where a small carryout pizzeria awaits.

A display case greets patrons (see photo above) with slices and drinks. The menu is quick and simple — grab your slice of choice and get back up to street level to devour your selection in the alley or as you roam.

As you might have noticed by now, old-school and no-frills certainly carry the day in Boston’s pizza scene. Monica’s just might be the most laid back and understated spot of them all. There’s no pretense here. Just pizza.

Ernesto’s Pizzeria is another familiar North End haunt with scores of reviews over the years touting the shop’s slices. Much like other pizzerias we encountered on our tour, Ernesto’s offers its dine-in and carryout menu in a casual, quick-serve setting. Though salads are available, it’s all about the pizza here.

Ernesto’s calls its fare “Old World Pizza.” We found it to be honest, blue-collar, tried-and-true … just like pizza was meant to be.