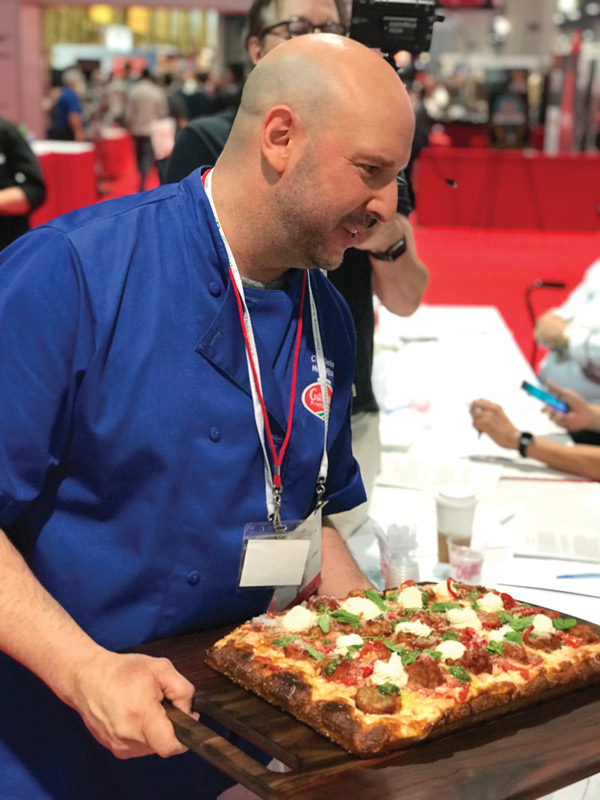 For well more than a decade Chris Decker quietly built a reputation as one of America’s finest pizza makers behind the scenes. As John Arena’s prized pupil at Metro Pizza in Las Vegas, Decker’s inquisitiveness, passion for perfection and dedication to all things related to the craft earned him the respect and admiration of his peers in the industry. Eventually word got out that if you want a high-level Sicilian crust, Decker was the guy with whom you needed to speak.

Driven to learn, content to stay in the shadows and yet eager to share knowledge, big-name pizza makers soon counted him amongst their ranks. The first to recognize his considerable talents, the aforementioned Arena — Decker’s mentor — sings his praises any chance he gets.

“He is, without question, one of the finest pizza makers in the country,” Arena says. “He’s never sought attention for himself. He’s always been happy to hang out in the kitchen and do his thing and not step into the spotlight. But he deserves his due. He’s an incredibly brilliant guy, a world-class pizza maker and anyone who has worked with him will tell you that.”

While filming a pizza demonstration for Pizza Today recently, Audrey Kelly of Audrey Jane’s Pizza Garage in Boulder, Colorado, walked viewers through the steps she takes to produce her Sicilian pie. She makes only 10 per day, and when they’re sold out, they’re sold out. When asked where she turned when she was learning to make a Sicilian pizza, the answer came readily: “Chris Decker in Las Vegas,” she said.

John Arena walks alongside the make table at one of his Metro Pizza locations and grabs a pan with a par-baked dough. He’s going to make us a Sicilian, but not because we need more food for the photo shoot. He’s already made us plenty of pizzas to photograph. No, he wanted us to see something with our own eyes and feel it with our own hands and mouths.

“Mine will be pretty good if I’m having a good day,” the humble and self-deprecating Arena says. “But Chris’, when you have his, you’ll notice the difference. He does it just a little bit differently during the process, and the end result is … well, it’s just better.”

Decker says his goal when making a Sicilian is for the finished crust “to look heavy as a brick, but feel light as a feather.”

Arena was right: there was just something special about Decker’s.

Same formula, same ingredients, slightly different mix, according to Arena. Says Decker: “John’s pizzas are always amazing. He pours his heart and soul into them. He has taught me a lot over the years.”

But what you can’t teach, at least not easily, is passion. Either deep down in your gut you want to be the best and are fueled by a fire to excel, or you aren’t. Not everyone has that drive, that it factor, that burning desire to transcend mediocre and good and settle for nothing less than great. Those who have it are the ones who stand out. Decker, says Arena, has it.

“And that’s why it’s so important to me, especially now as I’m getting older, to really recognize Chris and everything he does and to shine the spotlight on him,” he says. “He’s never wanted that, but it’s time. The industry needs to know how good he is and he deserves to be up on that stage with the best of the best.”

To that end, Arena decided to give Decker his own concept. When we were in Las Vegas visiting Metro Pizza, we went to see the location that one day will be brought to life with, as Arena says, “Whatever Chris wants it to be.”

Explains Arena: “It’s going to be totally Chris’ concept. He can do whatever he wants with it and I’ll support it. He’s making all the decisions on equipment, ingredients, menu, name … everything. It’s all his.”

For his part, Decker is obviously excited about the opportunity.

“It’s going to be a lot of fun,” he says. “It’s going to be stressful — it already is — and challenging, but fun. I’ve had a lot of opportunities over the years to go out on my own but never wanted to. I’ve always been happy with what I was doing. With this, it’s exciting because I have John’s support every step of the way and can lean on him. I don’t even know what I’m going to call it yet. I’ve had so many ideas and so many names, but nothing has stuck yet.

“It’s going to be a spot where everyone is friends and everyone knows they’re welcome. A place where friends go to hang out and not rush. So I thought about using ‘friends’ in the name somehow to reflect that, but I really don’t know yet. We’ll come up with something that feels right, but we haven’t really hit on it yet.”

While we were in Vegas to tour Metro and got the news of this new development, everything was in the early planning stages. Decker says he “has a general feel for where I want to go with the menu and we’re figuring out the equipment needs now and the ingredients and working off a skeleton outline and filling in the blanks as we go. It’s been really eye opening. The whole process. And I have John’s expertise and experience to help guide me and make it a little easier. It has definitely given me a lot of respect for anyone who has opened a restaurant before. When you’ve been doing this as long as I have, and you’re around all these people in the industry at Pizza Expo and on trips to Italy and get to know them and talk to them about their businesses, you have a pretty good understanding of what it takes to get a restaurant up and going. But even then something always comes along that surprises you. It’s very challenging, rewarding, trying, invigorating … all of those things. It’s going to be a fun ride.”

While Decker wasn’t exactly sure when his new Vegas concept would open to the public, we pledged to check in periodically and will get some video updates posted to PizzaToday.com later this year!

In the meantime, we want to hear about how the COVID-19 pandemic is still affecting your pizzeria. Send us an e-mail or a short video to the attention of our Editor-in-Chief, Jeremy White: jwhite@pizzatoday.com.