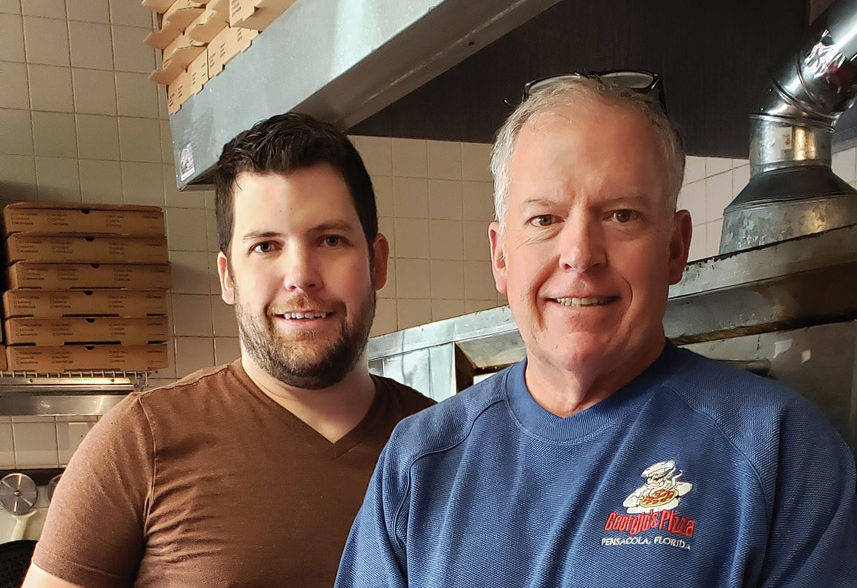 Georgio’s Pizza opened its doors in 1984 by George Petrakis and family. Being Greek, having Greek dishes to complement his version of pizza was easy. I purchased Georgio’s in 1998 after retiring from Morrison’s Cafeterias. Georgio’s is and always has been family oriented. Everyone in the Petrakis family worked the restaurant.

When I took over the reins, I began to let my sons help as they got older. I also knew that in order to get a day off, I needed to have someone that I could trust. My ex became my relief. Her husband was a handyman, hence he became my building maintenance manager. My first son met his wife at Georgio’s. She was our cashier through high school and college. I have three sons, all of which worked their way through school. My middle son is still with Georgio’s. So being a family-run business is putting it mildly.

Georgio’s started off with a heavy Greek influence. I kept the items that worked best for us. Greek salads, Gyro sandwiches and plates, tzatziki sauce, spinach eggrolls and different desserts still remain with us. If you have a pizza restaurant, you also have to have spaghetti dishes. Eggplant, veal and meatball dinners are popular.

Pensacola is prone to devastating storms during the summer months. I learned quickly that it is important to have a plan in place before the storm than try to make decisions after the storm. One of our first storms, I had not done a great job of planning. Once the power went out, I cooked up all the pizza dough we had. My son and I loaded up the van with 50 pepperoni pizzas and drove out during the storm to the first responders, giving them each a pizza. The next storm was different. I had talked to my vendor about borrowing a trailer to operate out of until power was resumed. They were very helpful when I needed the help. We had their trailer in our parking lot for two weeks.

When a storm is coming now, I have three generators that will run all the freezers and refrigerators. We cook with gas and it makes it easy. NBC sent Al Roker, the weather guy, to cover a storm one year. His crew stopped in and we were the only restaurant open. We cooked for Mr. Roker and his crew for two days. I did not charge him. On his last report from the beach, he bragged about Georgio’s having the best Philly cheesesteak east of the Mississippi.

Most importantly, before the season starts, have your insurance agent review your coverage. Once a storm hits the gulf, they will not write any policies.