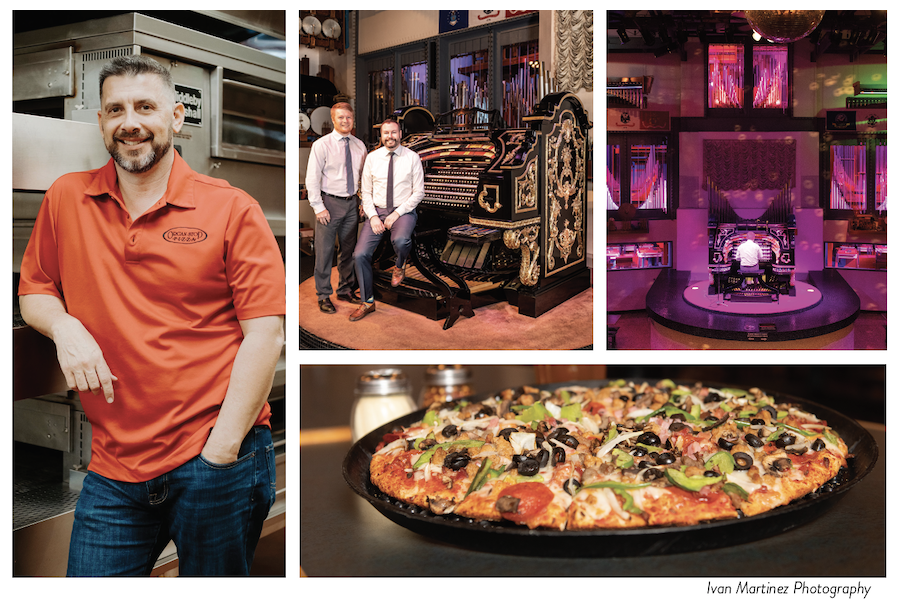 Organ Stop Pizza is one of only two remaining “Pizza and Pipes” restaurants in the country. In the 1970s and 80s there were Pizza and Pipes restaurants in almost every state. The concept was started as a place to bring the whole family for food and fun. This place is in a very unique situation because the dining room is always full of all age groups, from 2 to 102. Organ Stop Pizza is really the place to be!

We have a unique crust that is nice and doughy in the center but has a very crispy outer crust. It’s a medium thickness that really enhances the flavor of the sauce and toppings, without being too over-powering.

How is Organ Stop celebrating its 50th anniversary?

We are celebrating our 50th anniversary with, “50 Days to Celebrate 50 Years!” We have a $50.00 Meal Deal that includes Two Large Pizzas, Two Appetizers, and Two Pitchers of Soft Drink. It’s a great bargain considering you can feed six to eight people for that price. We are also doing nightly giveaways in house and other giveaways on social media. We are so grateful to the residents of Arizona, as well as customers from all over the U.S. and Canada, that have been returning year after year to keep us in business this long.

How has Organ Stop remained relevant to today’s customers?

Organ Stop Pizza remains relevant by providing quality food, great service and amazing entertainment all at an affordable price. We’re also one of very few restaurant concepts that is attractive to the whole family. It really doesn’t matter how old you are, it’s always fun to be at OSP.

Tell us more about the Mighty Wurlitzer and its place in the pizzeria’s history.

Organ Stop’s Mighty Wurlitzer Theatre Pipe Organ has always been the star of the restaurant. Originally built in 1927 for the Denver Theatre, it was a much smaller instrument than it is now. Back then, it was about 1,500 pipes played from a three manual (keyboards) console.

As of today, our Mighty Wurlitzer boasts 82 individual ranks (sets) for more than 6,000 individual pipes. Each rank is sound you would hear in a band or orchestra. We have eight different styles of trumpets, two saxophones, flutes, clarinets, violins, cellos, string basses, etc.

These organs were originally built to replace the orchestra that was used to accompany silent films.

As we’ve continued to build and add on to our amazing instrument, it has grown to the largest Wurlitzer Theatre Pipe Organ in a public setting in the world. It is also widely considered to be the very best one ever assembled. Organists from all over the world have come in to play our amazing instrument. We are extremely proud of our Wurlitzer.