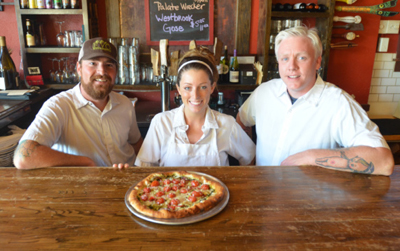 While working at a local, upscale Charleston, South Carolina restaurant, friends Ricky Hacker and Matt McIntosh had a vision. “We kicked around the idea of a wood-fired pizzeria and realized that we didn’t have the money to open a restaurant,” Hacker says.

The partners pulled funds together to operate a mobile, wood-fired pizza cart. In 2005, Extra Virgin Oven (EVO) was born, offering its locally focused Neapolitan-style pizzas at Charleston area farmers markets. “We went grassroots with it and started off small and did markets and catering, special events — anything we could get, honestly,” Hacker says.

Sourcing ingredients locally, EVO became an instant hit at the markets. “Our philosophy from the very beginning was buy locally, buy seasonally and just really promote what is being grown around us,” McIntosh says.

With the cart’s success, Hacker and McIntosh secured the capital for a restaurant. EVO opened its permanent location in 2007, already with a large fan base from the farmers markets. “The restaurant was always the goal and the cart was a means to get to the goal,” McIntosh says.

The partners chose a storefront in the up-and-coming neighborhood of Park Circle in North Charleston, miles away from the tourist-rich downtown. “You are not mixed up in the downtown scene, where there are 400 restaurants and everyone is going after the same thing,” McIntosh says. The rent is very cheap and the area is filled with young couples and families, he adds. North Charleston is also home to a variety of commercial industries, drawing more than 12,000 people into the area each day to work.

Pizza Today traveled to the Palmetto state recently to check out EVO first hand. The location sits on a corner of a street lined with independent restaurants and shops in revitalized, brick buildings. A few patio tables line the sidewalk. The colorful interior of orange and yellow walls complement the wooden bar and barn beam flooring. The open dining area and bar seat 50, along with a few stools lining a window counter. A half wall separates its small kitchen. Three chalkboards prominently promote different segments. One highlights what beers are on draft, another promotes daily lunch, dinner, beer and dessert specials, and the board that resides over the wood-fired oven features local ingredients available and the farms from which they came.

Hacker and McIntosh handled the build out of the restaurant, which was previously a law office, themselves, enlisting a few friends to help. Hacker says that a lot of what’s in EVO’s interior is what he and McIntosh liked and it fits well with the local concept. Once completed, the build out cost nearly $75,000.

Six weeks after the restaurant opened, the partners decided to retire their pizza cart. It became too much to operate both, McIntosh says.

The partners are constantly evaluating and streamlining the operation. Originally open from 11 a.m. to 10 p.m., they opted to close during the midday lull between lunch and dinner, as well as closing on Sundays. “It was a business decision as far as money and regrouping,” Hacker says, adding the midday gives the staff time to clean and prep for the next service.

It’s also great for shift changes and gives EVO’s General Manager Ben Garbee and Executive Chef Blake McCormick an opportunity to gather with staff to go over goals and specials.

EVO’s ever-changing menu of seasonal products is at the heart of its concept. Nearly 90 percent of its menu comes from farmers in the Charleston area and 70 percent of the sales come from pizza. Each day, McCormick creates a lunch and dinner special based on fresh ingredients that she receives. She creates 12 unique pizzas each week. “Our food is not based on finding a recipe and then obtaining the products,” she says. “It’s about taking a product that we source locally and building upon it.” The inspiration comes from local produce, cheeses and meats, she continues.

McCormick says the flexibility of EVO’s special’s menu aids her kitchen staff in maintaining a 27-percent food cost. EVO is also able to maintain a relatively low price point for the Charleston area and its style with the menu’s simplicity, upselling low food cost items and operational factors like a low rent, she notes.

Buying local, McCormick says, isn’t really more expensive when you factor in the quality of the product, its freshness and remove much of the transportation costs involved. Creativity is paramount to using seasonal items across the menu, from appetizers and salads to pizza. Nothing goes to waste, she adds.

Even its beer menu is concentrated on local craft breweries. Collectively, beer and wine account for nearly 30 percent of EVO’s sales.

Half a dozen pizzas have a home on EVO’s regular menu. A local Charleston favorite is the Pork Trifecta with red sauce, homemade sausage, pepperoni, bacon, mozzarella and Parmigiano-Reggiano ($15 for a 12-inch). EVO’s Pistachio Pesto pizza (pistachio pesto, Split Creek fromage blanc, ground pistachio, crème fraiche, mozzarella and Parmigiano-Reggiano — $13 for a 12-inch) gained national attention last fall when the signature pie was highlighted as one of the top 10 pizzas in the U.S. on the Cooking Channel special “Pizza Outside The Box.”

The New York Times, FOX News and other regional and national media have also taken notice. “We were blessed with a lot of publicity relatively quickly and that put us on the map,” Hacker says.

Word-of-mouth has been the driving force behind EVO thus far. “We’ve always been geared towards not throwing money towards advertising dollars, but doing a lot of donations, special events, charity and gift certificates,” Hacker says, adding that they also use social media to communicate with their fans.

EVO has built a continual influx of innovation and rejuvenation with its locally focused concept. “Using local keeps things interesting,” McIntosh says, adding that its rotating menu of often-unique items is heavily dependent on EVO’s staff.

Hacker notes that many of the farmers know EVO’s employees by name. Staff members visit farms a couple times a year to see operations firsthand. “Garbee spends a lot of time with staff, training them and updating them with notes and tastings, he adds. “The knowledge is everything on the tableside.

These days, Hacker and McIntosh leave much of the day-to-day operations to the pizzeria’s management team of Chef McCormick and Garbee, while the partners pursue an endeavor on the backside of the restaurant — EVO Craft Bakery, which opened in August 2012. The pizzeria had already receiving acclaim for its house made chocolates and desserts. The bakery was a natural addition. “They complement each other very well,” Hacker says.

McIntosh concurs. EVO was at a point where it was time to expand,” he says. “If we are going to take over this space, let’s use it to generate income instead of putting a bunch of money into a prep kitchen,” he emphasizes.

EVO’s local passion extends to its bakery, from its artisan baked goods to local teas and coffees.

While EVO may have been a trendsetter in the local movement in Charleston when it began, Hacker says, “For us, it has always been just the right way to do it.”