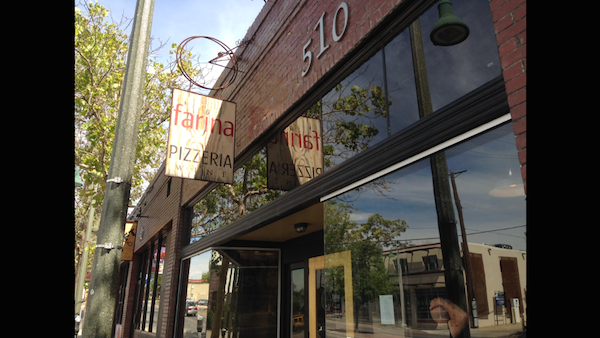 At first glance, visitors might mistake Farina Pizzeria in Albuquerque, New Mexico, for a wood- or coal-fired pizzeria. The gourmet pizzas’ crusts have that beautiful char characteristic, typical of wood-burning oven.

Farina’s menu even comes with a disclaimer: “Our pizzas are baked in extremely hot ovens ranging from 650 to 800 degrees. The extreme heat allows the crust to become flaky and crispy, while also allowing the ingredients to cook quickly. Due to the extreme temperatures the crust will take on a charred appearance. This is the sign of a pizza baked in a hot oven and is not burnt. These spots may be black, the quick baking produces a superficial char, which does not taste bitter, rather taking on a smoky and caramelized set of flavors.”

One look through the open dining area into its galley kitchen reveals the side view of its double deck ovens.

Pizza Today stopped by Farina over the summer to chat with Stewart Dorris,
co-owner and general manager. “The reason why we use these ovens is because you get a consistent product,” he says, adding that deck ovens required less upfront costs. By seetting such high oven temps, the pizzeria’s able to output 250 pizzas in a dinner service.

Farina Pizzeria opened in the fall of 2008 amid an economic downturn. That didn’t stop the 110-seat restaurant from experiencing instant success fueled by the reputation of its owners.
Farina is the creation of Dorris, chef and master baker Richard Winters and Terry and chef Pat Keene. The Keenes also own sibling restaurants The Artichoke Café and Alto Farina in Albuquerque. Both Dorris and Winters worked for the Keenes at The Artichoke Café for a decade before venturing into co-ownership.

All four partners knew the intricacies of operating a fine-dining restaurant in the East Downtown District. Farina brought a new challenge of applying a fine-dining approach with a strong emphasis on service in a more upscale pizzeria setting. Today, Farina generates a steady
$1.7 million in sales annually.

“When we opened the doors, we expected that we would be able to support ourselves and support the neighborhood, but we didn’t know that we were going to be slammed,” Dorris says, creating a clogged dining area from the start.

The interior has a long bar with seating, a few large horseshoe booths tucked in the corners, a high-top table and rows of two-top tables. Soon after opening Dorris added an additional table to each row to accommodate the volume. On the verge of communal seating, Dorris says, “You get that psychological separation because the tables are about two to three inches apart.”

Dorris admits that people were a little apprehensive of the cozy seating in the beginning. “Once they got used to the concept and they actually started sitting next to people they didn’t know,” he says, “within weeks you see people that had never met now come in together.”

The seating fits into Farina’s concept and its atmosphere. “It’s a community, friends, fun place,” Dorris shares. “It’s an unpretentious, hip kind of place to hang out.” The pizzeria has a couple hundred regulars from the neighborhood and citywide who visit the restaurant two to three times a week.

Families are a key customer base. Recently, Winters and his wife made drawing books with Farina’s logo on the front, which come with colored pencils to entertain its youngest guests. They also give the children dough to play with, Dorris says.

The four partners have a harmonious way of operating the restaurant.

Dorris credits the Keenes, well-respected restaurateurs in the area, for the opportunity. And Dorris finds Winters’ dedication inspiring. He’s quick to acknowledge Winters being among the best chefs in the country.

Before opening Farina, the partners set out to learn about pizza-making. “We didn’t know anything about pizza,” Dorris says. The Keenes ventured to Italy for inspiration, while Dorris and Winters sought to find mentors in the U.S. Brian Spangler from Apizza Scholls in Portland, Oregon, provided the much-needed guidance that the group was looking for. “We went up there and spent 48 hours in his kitchen and learned how to do what he does,” Dorris says, “then came back and put our twist on it.”

That signature char that Farina’s is known for comes from its dough recipe. It’s born from a French-bread style so the crust has a light, airy texture. From the basement dough room, dough is made daily at room temperature using a poolish starter.

Winters and Pat collaborated to come up with a menu of eight gourmet pizzas — from the Margherita and Bianca to Salsiccia and Formaggio di Capra. The Salsiccia combines a tomato sauce and sweet fennel sausage with roasted onion and provolone ($16). The popular Formaggio di Capra features a farmhouse goat cheese, pancetta, leeks, scallions and mozzarella ($15).

The composed pizza menu is complemented by antipasti, insalata, desserts and nightly rotating specials, featuring a soup, salad, pizza, dessert and a pasta or sandwich special.

There are occasions when the menu features some premium meats and cheeses that can cost upwards of $50 a pound. Food costs run 35 percent and Dorris says that’s right where they want to be for gourmet pizza.

It’s important that the pizzeria is also affordable, Dorris adds. Fundamental to Farina’s pricing is maintaining good relationships with its distributors and balancing its high-end ingredients with its bulk beer and wine purchases.

A hand full of Italian wines are selected by Dorris to complement its regular and specials menu. Farina only pours local beers on draft, offering others in bottles.

Core to Farina’s success are its 46 employees. Dorris says they are committed to higher minimum wages and a family-like structure. At one point when Dorris was seeking more output from his leadership team, Dorris says his managers came to him asking for a dollar more an hour. Instead managers received $2 more per hour.

“More than anything, respect your employees with everything you have” Dorris says. “Give them love and they will return that and then you’ve built relationships that will last you a lifetime.”