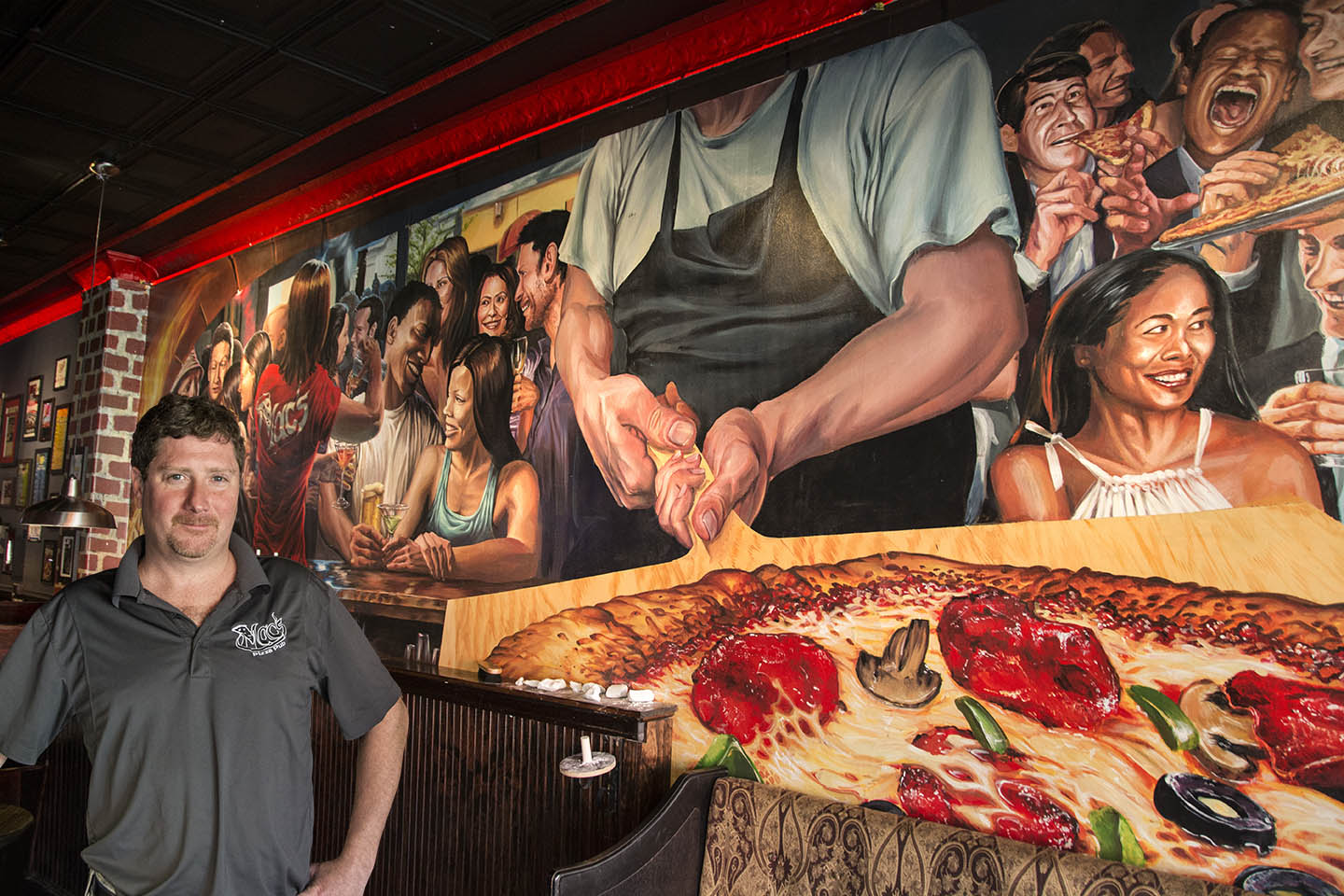 Located just a stone’s throw from the University of Cincinnati, Mac’s Pizza Pub certainly has an enviable location. Students love to eat and drink, and many have the disposable income that comes along with college life. But Mac’s doesn’t just rely on location, location, location –– the three-unit company has the awards to back it up and the word-of-mouth that makes it stand out even amidst a dozen other restaurants nearby.

Founder McNeil Ryan –– “Mac” to his patrons and friends –– may have had more than a decade in the restaurant industry, but “I came to the perhaps illogical conclusion that trying to sell beer and pizza half a block off a college campus would be easy,” Ryan says. “All the college kids drink and eat, right? Well, I was wrong. It is extraordinarily hard to open a restaurant, even with a captive audience. But, I got into it because I think I was a little naïve. I’d worked for other restaurant owners, and I said ‘God, those guys are really dumb. If they can do it, I can do it.’ I got into it for the wrong reasons, but once I was in, I was in. Fortunately, I persevered and I very much like what I do. I love what I do.”

Mac’s Pizza Pub opened in November 2005 and today has three stores and $3.75 million in combined sales. Ryan says he’s lucky because a portion of his customers have expendable cash from student loans or parents, and “we were kind of isolated from the recession. And as I got better with what I was doing and honing my systems and redoing my menus and becoming what I am now, fortunately I had some wiggle room because a lot of these kids were just drinking beer and eating pizza.”

Mac’s business concept has evolved over the 10 years it’s been open –– and two additional stores have opened in nearby suburbs –– and now has a big bar component along with its award-winning food. “We’ll have more people here at three o’clock in the afternoon than we will at noon, even though this is a restaurant,” Ryan says. “We don’t really get a lunch rush because of the students. But if you came back in here tomorrow night, you won’t be able to walk in here. College kids love their karaoke.”

Indeed, catering to their prospective clienteles is a key focus for each of the three Mac’s Pizza Pubs that have been established in Cincinnati. The second and third locations are both located in more suburban areas and are more family friendly.

“We do some unique things that obviously bring people back,” Ryan says. “We started doing vegan pizzas a long time ago –– out of the gate from day one. … We also partnered with The Christ Hospital for their heart healthy program, even though we are a pizza place. We sell a lot of chicken wings and burgers and stuff like that, but we have some heart healthy things.”

Those include ingredients like fresh spinach, sun-dried tomatoes, vegan mozzarella cheese and artichoke hearts –– even a gluten-free dough offering from a Cincinnati-based gluten-free company.

Once Ryan was able to get vegans in the door, he says, he saw something unique happen. Those diners “drink really good beer, and they tend to spend a lot of money,” he says. “If you’re a vegan and you’re going out to eat with three or four other people, we gotta go where you can eat.”

As a result, Mac’s menu has evolved to cater to the highest number of potential customers. It includes everything from black bean burgers and spinach salads to chicken and cheese quesadillas, Philly cheesesteak sandwiches and waffle fries. There’s an extensive list of specialty pizzas (a large is $18.99) and dough is made in house, cheese is grated and vegetables are diced in the stores daily. The Chicago-Gyro Pizza even won a best entrée award at the Taste of Cincinnati event and features gyro meat and tzatziki sauce from a local gyro restaurant.

“Frankly, I have to give credit to my cooks, because they’re the ones who came up with that,” Ryan says. “They came up with a fish and chips pizza the other day. It was nuts. We do a pizza buffet one day a week, so on Fridays we tend to have fun and throw out all kinds of weird things. A few of those concepts have turned up on the menu.”

The original restaurant has a higher percentage of liquor sales being situated right off campus, and “we’ve got over a hundred different beers at each of our locations,” Ryan says. “We’re still sticking with that. A lot of the beers are local and fresh.”

“We try to minimize our carbon footprint by promoting draft beer, and we recycle almost 90 percent of everything that comes in here,” Ryan says. “We’ve got an electric car-charging station out back. I got
every restaurant on my block to recycle. That’s not an easy task.”

It took seven years for Ryan to consider a second location, which he opened with partner Dave Rinderle. “I was in no hurry,” Ryan says. “No. 1, I needed to get out of debt. … I opened up and I went straight downhill for a couple of years and then once I had the demand created, I was able to raise my prices to a profitable level, and I’ve been fine ever since.”

Rinderle, a former Mac’s general manager, had a built-in brand loyalty and knowledge of Ryan’s systems that made him a perfect candidate for a new store. The second location has a heavier food component than the original, Rinderle says, and salads, wings and appetizers –– including a beer cheese using beer from a local brewery –– are popular.

“Pretty much anything we can make on our own, we’ll do –– hand batter chicken tenders or fry pickles,” Rinderle says. “But, we are known for our pizza. … When people come in and ask what they should have, I tell them ‘When pizza’s in the name, that’s what we’re known for.’”

Josh Freid, a Culinary Institute of America graduate and the Mac’s corporate chef, helms the company’s third store, which opened in
July 2014.

Ryan says having both Rinderle and Freid on-site at their respective stores is critical for brand consistency. “I want somebody who’s making money, and wearing a big ol’ smile and attracting people to the brand,” Ryan says.

There’s no need to spend a lot of dough on advertising after 10 years as a Cincinnati staple, and there’s built-in word-of-mouth campus PR that can’t be bought. Admittedly, there’s a lot of competition –– not only from pizzerias but other nearby eateries as well. “The problem with us versus the chains and competition –– there’s a lot of businesses out there that are vastly cheaper,” Rinderle says. “You can get a lot more bang for your buck. But they don’t quite have the quality. We will definitely go quality over quantity any day of the week.”

And that emphasis on good food, coupled with careful operations and proper debt management, makes Mac’s Pizza Pub a good candidate for successful growth. Ryan is actively seeking a fourth store –– and already has current employees set to run it –– and hopes to have it up and running within the next six months or so. “With these locations, there’s a certain amount of luck and timing,” Ryan says. “‘Luck finds the prepared,’ I think is the expression.”

Ensuring each store retains its own personality is also a key point. “There are consistencies, but then there are some things that are different,” Ryan says, “and that’s kind of by design. I don’t want to be a McDonald’s where they’re all the same.”