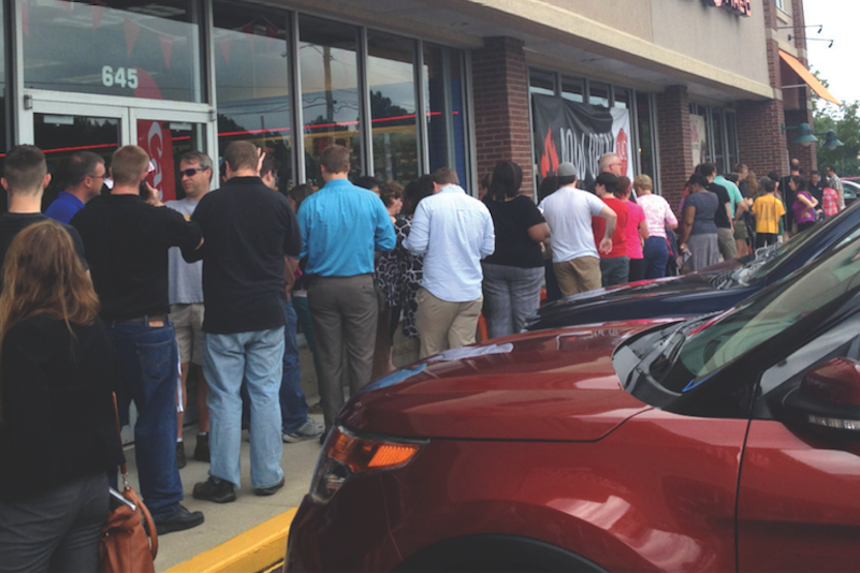 How to celebrate an anniversary

An anniversary means you’ve done it. Congratulations. Amidst all of the obstacles of operating a restaurant, your pizzeria has made it another year, another decade. There’s reason to celebrate. You deserved it. Your hard-working employees and your loyal customers deserve it, too.

When and how do you celebrate?

Every year, says Salvatore Reina, owner of Francesca’s Brick Oven Pizza & Pasta in Glen Rock, New Jersey. The pizzeria has hosted an anniversary celebration each April since 2008. “Every year it’s gotten better,” he says. “We do something small or a little bit to top the previous year.”

Francesca’s daylong celebration includes: $1 slices and drinks; a free chocolate fountain; hiring a balloon and face paint person; gift certificate giveaways; raffles and a wheel with prizes at every stop.

James Broderick of English-based Little Italy agrees. The pizzeria marks its anniversary yearly. “We’ve just celebrated the end of our fifth year, and we always celebrate our birthday by giving something away to the people who support us,” he says. “Each year, we’ve given away at least two prizes of free pizza for a year, with the winners receiving 52 12-inch pizza vouchers.”

Just before its fifth anniversary, Broderick was forced to close Little Italy’s second location. So he wanted to do something special for his devoted patrons. The pizzeria gave away a holiday at a private log cabin. “The build-up started only two weeks before our birthday, so we decided to do the draw on Christmas morning,” he says. “We marketed it only via Facebook (which also links to our Twitter), and the response was phenomenal. The population of our town is around 19,000, and we managed to reach 10,000 people in fewer than 48 hours. It really put us on the map with people who didn’t know about us, and we saw a large increase in trade — which has continued since the competition closed.”

Arthur’s Pizza and Mexican Foods in Ellis, Kansas, has been in business for more than 30 years. Owner Gilbert Kinderknecht says he opts to celebrate Arthur’s anniversary every five years. “Last year was our 30th anniversary and we celebrated with Flashback Friday,” he says. “Bring in any menu from over the 30 years and get one item for the price in that menu. We had one family that got a large 15-inch pizza for $7.99. For our 20th anniversary, we gave away t-shirts to the first 20 former employees that stopped by.”

Arthur’s has also hosted a 29-inch pizza-eating challenge with area radio DJs and news anchors. “It took the two DJs and one cable news anchor 48 minutes finish it,” he says.

“We start about six months in advance,” Kinderknecht says. “We do regular advertising with both radio and cable TV in the area and have very good relationships with them. We also use our local newspaper, social media and flyers posted around town on windows and billboards.”

When and how you celebrate your anniversary should be reflective of your concept. Always plan the event with your brand and your customer base in mind.

The seasoned operators have advice for executing a celebration. “Have extra staff on hand and schedule your team earlier that day,” Reina says. “There are a lot of logistics so be strict with the numbers.” He also offers other tips, including: picking the right date; expecting a busy day and never budge on quality control.”

Kinderknecht advises: “Start planning in advance and double check all your plans at least a month in
advance. And use all the connections you have: local chamber, of commerce advertising relationships, the mayor and even family members to hang up flyers around town. That is the best advice I have. Plus, the day of the event make sure you have fun, along with your patrons!”

“My advice with an anniversary competition is the same as it is for every other competition and special offer,” Broderick says. “Make the prize or deal as spectacular as you can, and never have any catches or ‘get out’ clauses. If you offer something for free, make it free. Don’t make the customer buy something else. Just give them the freebie. For the first few that you offer, people will look for the catch because that’s what they’re used to. But once they see that there really is no catch, it creates a huge amount of trust and loyalty between your business and the consumer, and that cannot be bought.”

Here are some ways to celebrate an anniversary:

Create your own milestones

Celebrating your pizzeria’s success is not limited to the number of years you have served your community. There are plenty of milestones that you can mark that distinctively align with your brand. Here are a few to consider (and many can be acquired through your POS):