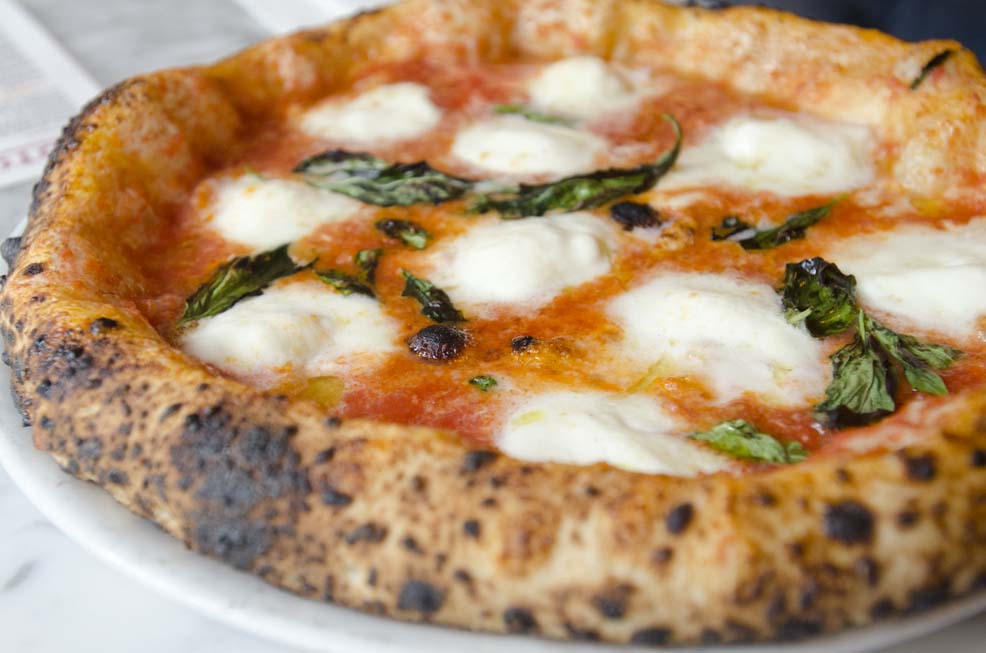 There’s no doubt that New York City is one of the pizza capitals of the world, perhaps best known for its large, foldable slices. But there’s a not-so-quiet movement to bring Neapolitan pizza to the forefront of that scene, and leading the pack is five-year-old Motorino. Given its brevity in the industry, what is perhaps most surprising is the reverence New Yorkers –– and critics –– already hold the company.

Chef-owner Mathieu Palombino always had a passion for pizza, and after working in a variety of kitchens “he decided he wanted to bring really authentic Neapolitan pizza to New York,” says General Manager Marc Kenyon. The original Motorino opened in 2008 in Williamsburg in Brooklyn, with a second location in the East Village in 2009. In 2011, the original Williamsburg location was shuttered by the Department of Buildings for unsafe building conditions under no control of their own, but Palombino was tenacious –– the brand returned to Williamburg last summer with a new location and great fanfare. Even more exciting? There’s now a Palombino-owned Motorino in Hong Kong that opened early last year (and a second set to open at presstime).

Kenyon says he believes the move toward artisan pizza in New York is based in part on the emphasis given as a whole to the city’s dining scene. Neapolitan pizza is “not necessarily the easiest or the fastest, but it’s what’s the best and (diners) don’t seem to mind if they spend three or four more dollars on a pie,” he says.

Central to Motorino’s operations are the 600- to 900-degree wood-burning ovens that can put out more than 500 pizzas daily. Neapolitan pizza is “more difficult, but (Palombino) thinks it’s worth it,” says Kenyon. “It’s more expensive, the products that we use and the ingredients, but we would never skimp on quality.”

Crucial to maintaining control is a menu that is small by design, mainly because the restaurants are tight on space and storage. (There’s no room for big walk-in freezers.) The menu at the Williamsburg location is slightly larger because the restaurant’s kitchen is physically bigger and includes calzones and the addition of a few more pizzas. Dough, sauce and meatballs are made daily, and fresh ingredients mean there’s little waste, but seasonal specials keep the menu interesting. Especially popular are the summer Heirloom Tomato and the autumn Finocchiona pizza made with salami flavored with fennel seed. All pizzas measure 12 inches, and they stick to that due to the 14-inch oven opening.

“Margherita is always going to be our top seller,” Kenyon says, “but what kind of put us on the map was our Brussels Sprout pizza.” That pizza ($16) is a white pie topped with fior de latte, garlic, pecorino, smoked pancetta, Brussels sprout leaves and EVOO. Rounding out the top three is the Soppressata Piccante, which features tomato sauce, fior de latte, spicy soppressata, chili flakes, oregano, garlic, pecorino and EVOO.

Although ingredients might increase in price, Motorino is not going to cut corners, even if that means occasionally raising prices. “Our ingredients haven’t changed at all,” Kenyon says.
Alcohol offerings stick to just beer and wine –– high-quality Italian brands –– and most glasses are priced at $8 to $12. The average guest check sits at about $28 (slightly less at lunch) and many customers add an appetizer or salad to their pizza orders.

While Palombino remains the head chef, the company’s lead cook has been with Motorino since its first location in Brooklyn. About 70 employees in New York call Motorino home, with about half of those serving as delivery drivers. Admittedly, Motorino’s soft crust and fresh ingredients are not the easiest to deliver, says Kenyon, but “it’s all about speed. The pizzas cook really fast –– it’s in the oven less than a minute, for the most part –– and we try to get it to the customer as fast as we can and as carefully as we can. With the amount of delivery drivers that we have, we really strive not to have any pizza waiting for delivery guys. As soon as it’s out of the oven, it’s on a bike and to the customer. Our delivery times are usually between 20 to 35 minutes.”

Despite the fact that all deliveries (including those late at night) are made by bicycle, the company’s delivery areas are fairly large. “We figured we’d be able to keep the quality of the pizzas because we can get it out so fast,” Kenyon says. “We can get anywhere on bike within 15 minutes.”

The biggest challenge delivering by two wheels? Simply the amount they’re able to transport at one time. “Anything more than eight or nine pizzas (and) we’ll send two guys or we’ll put (the order) in a taxi,” Kenyon says. They’ll extend the delivery zone if the restaurant is not busy or for a large order.

Motorino’s quick rise to culinary fame had landed it on a number of “Best of” lists across both the region and nation. Most recently, the Brussels Sprouts pizza was named one of the 15 Best Pizzas in the country by USA Today. Write-ups in The New York Times, Everyday with Rachel Ray, Time Out NY and Men’s Health have added fuel to the fire, and everyone, it seems, wants a piece of the pie. When Pizza Today visited the East Village location on a seemingly uneventful and slightly dreary Tuesday late afternoon, every seat in the house was taken, Kenyon manned the busy phone and we found ourselves dodging both customers and servers to stay out of the way.

“We don’t do any reservations. It’s first come, first served,” Kenyon says. “Wait times are very important to Mathieu. We try to keep that as minimal as possible. It’s a small restaurant, and we’re busy every night, but wait times are typically under half an hour, unless it’s a larger party.”
Because Motorino is already considered a must-have on the pizza scene, they don’t have to invest much in marketing. Word-of-mouth –– including a frequent stop by diners on Scott Wiener’s New York Pizza Tours –– remains the company’s best marketing tool, but they do use social media. They also participate in local charity events like the annual Slice Out Hunger event in NYC (a giant pizza party that raises money for Food Bank for NYC) that only serves as more brand awareness and generates goodwill for the brand.

And competition? While the market in New York may seem saturated with both
independents and chains alike, Kenyon says it keeps Motorino on its toes but “the more pizza the better. We do what we do and we stand behind it. And it’s worked for us. We’re still busy. Our delivery business has really taken off.”

Still, they are not immune to changing trends. They added a popular bacon, egg and cheese brunch pizza on the weekend from 11 a.m to 4 p.m. because New Yorkers seem to love their mid-morning meals.

After opening four locations, the biggest challenge now is simply keeping up with the demand. There are no immediate plans announced for additional units in the U.S., “but if there’s an opportunity for it, we’re not going to say no,” Kenyon says. Still, there is not a pressing need to grow for growth’s sake. Palombino is “very careful about keeping a eye on the quality of the product,” Kenyon says, “and that’s really important.”