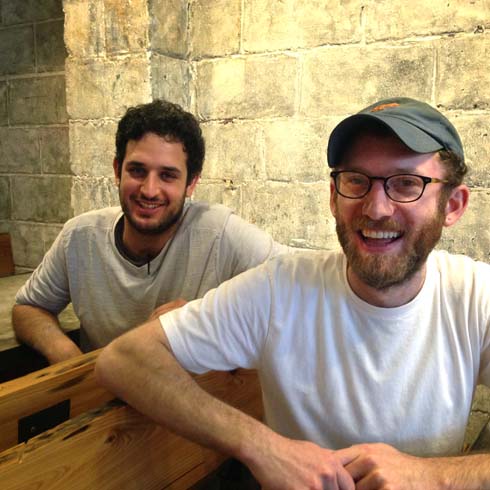 Pizza Delicious — New Orleans, LA: From pop up to phenomenon

Pizza Delicious — New Orleans, LA: From pop up to phenomenon

Native New Yorkers Michael Friedman and Greg Augarten longed for the pizza they grew up eating when they moved to New Orleans, Louisiana, to study at Tulane University. After college, the roommates stayed, making The Big Easy home.

That hunger for their hometown pizza has turned into a thriving pizza business with an origin story that many would revel in. Pizza Today dropped in on Friedman and Augarten at Pizza Delicious in the Bywater this winter to see the operation up close and learn more about its fascinating beginnings.

The story goes: Disappointing visit after disappointing visit to area pizzerias searching for the perfect slice, Friedman and Augarten took matters into their own hands to create that evocative New York-style pizza in their small apartment kitchen. It sparked a pizzaiolo passion neither of them expected.

The friends soon found a community kitchen in the Bywater neighborhood to perfect their craft. An old commercial bakery, the communal kitchen was basic but had everything the two needed to formulate a dough starter and test recipes from “taste memories,” as Friedman calls them. Neither had culinary backgrounds, but they possessed an insatiable desire to bring New York-style pizza to New Orleans.

After a few months of research and experimentation, Friedman says, they hit on something with their dough formula and its two-day fermentation. A pop up Pizza Delicious was born. In 2010, Friedman and Augarten began selling New York-style pizza to friends and neighbors in the Bywater one day a week on Sundays. Customers walked up to a takeout window in an alleyway on the side of the community kitchen to order pies.

Friedman and Augarten admit that they went into the venture blind. But, Friedman says, they knew if they produced an amazing product, they could learn the rest. In that humble beginning, “We paid our rent in pizza,” Friedman says.

Pizza Delicious’ modest, yet compelling start drew a slew of local press and Bywater residents raved about its not-so-secret gem. Augarten says, it all started very grassroots — telling friends, placing fliers in the Bywater district and posting on Facebook. The pop up even won a few pizza “best of” honors in New Orleans, all without a physical storefront. National attention soon followed.

The Bywater neighborhood has been on the mend since suffering a significant drop in population in the wake of Hurricane Katrina. Today, it has experienced resurgence as an art district with eclectic artisans, homes, residents and businesses. It turned out to be an ideal spot for an underground takeout pizzeria.

Momentum kept building, Friedman says. “We went from making 30 pizzas on Sundays to — a few months into it — we were breaking 100 to 125 pizzas,” he says, adding that the two hired employees and soon got into a rhythm with kitchen operations. Figuring that they could churn out 20 pizzas per hour in the barebones shared kitchen, they set up a reservation system for pizza pickup. “We knew we had something going when people were calling six to eight hours ahead to reserve a pizza,” he adds.

A year in, Pizza Delicious opened for an additional day each week — also a hit. Freidman says he noticed the same Bywater neighbors were ordering pizza both days.

After two years as a pop-up restaurant, Friedman and Augarten set their sights on a permanent, full-service pizzeria in the Bywater. The two signed a lease on an empty warehouse down the road from the community kitchen.

Build out of the Piety Street location cost nearly $300,000. “I think we did a really good job keeping costs down for pretty much dealing with an empty space,” Friedman says, adding that they tried to do as much as possible themselves. “It was a lot of sweat and misery.”

The owners also enlisted the talents of friends who did everything from design the interior and build tables to develop the pizzeria’s Web site.

Even after securing bank loans and loans from friends and family, Friedman says, “it’s pretty challenging to raise funds to start a restaurant.” The owners turned to the crowdfunding platform Kickstarter to raise money to purchase Pizza Delicious’ most vital equipment — its deck oven.

The Bywater community rallied around its pizza startup, driving the project’s success — 282 backers pledged more than $18,000 to help Pizza Delicious get off the ground. Three pizza peels of “Special thanks” to Kickstarter backers and people who were instrumental in opening Pizza Delicious hang prominently on a bare cinder block wall near the front entrance.

Pizza Delicious opened its brick-and-mortar pizzeria in 2012 with a well-established customer base. “We’ve had a very organic growing process from being this small pop-up, secret pizza place to now this full-fledged restaurant,” Friedman says.

The full-time pizzeria proved as successful as its temporary counterpart. Gross sales topped $1.2 million in 2013 — that included a three-week vacation shutdown in August, Friedman says. The break in operations didn’t slow business. October and November 2013 sales numbers were the highest the pizzeria has recorded, he says.

On its busiest night, Pizza Delicious sells upwards of 240 18-inch pizzas. Kitchen operations are key to staying on top of the pizzeria’s volume. “We use the assembly line method to making pizza,” Friedman says. “We can have up to four people stretching and topping pizzas.”

The counter-service pizza place has 30 employees and maintains a 27 percent labor cost. Friedman says, quality and volume attribute to such a large staff. Much of its menu is made in house. The menu requires great attention to detail in food prep and its staff works hard to maintain high standards, he adds.

“We take your corner New York pizza joint and elevate it just a little bit,” Friedman says. The house salad, he says, is a perfect example — it is enhanced by the addition of Kalamata olives, aged provolone and a house-made balsamic vinaigrette ($6).

Friedman and Augarten adopted a small menu to foster consistency. It also opens the door to offering a rotation of specialty and seasonal items. The specials menu of pizza, pasta, salads and desserts rotates weekly or biweekly. Past pizza specials have included the Broccoli Rabe and Pancetta with garlic and chili flakes and Rosemary Potato with red onion and spicy béchamel.

Its Vegan Garlic-Spinach pizza with roasted red peppers and red onions ($18) began as a special. It has become such a popular item for more than vegan patrons that it has found a place on the regular menu. “We came up with a way to serve a vegan pizza that didn’t utilize the vegan cheese,” Friedman says. The allure lies in its base, a paste of sautéed spinach, pine nuts and other secret ingredients, he adds.

Each day, the shop goes through 30 or more dough balls of garlic knots that are infused with an intense garlic butter and high-quality Parmesan.

Pricing pasta dishes under $14 and offering $2 pizza slices, Friedman says, is important to keeping Pizza Delicious affordable to its Bywater neighbors. “We want to serve this community,” he says. However, high-quality ingredients and lower menu pricing impacts its food cost — running at about 33 percent, Friedman says, a sacrifice they are willing to make given the pizzeria’s volume.

Its focused beer and wine menu consists of a small selection of draft beer and six Italian wines — at various price points. Beer and wine accounts for 10 percent of the pizzeria’s sales.

The young pizzeria has built a solid reputation on being the “go-to” spot for New York-style pizza and has surprised its guest with its other offerings. Traffic continues to be driven by word of mouth and a strong media presence. Often times, Friedman says, they aren’t aware that a journalist has even been in the restaurant until they come across an article. Zagat, Food & Wine, USA Today, Conde Nast Traveler, Huffington Post, Eater, Buzzfeed and Slice Serious Eats have taken notice.

What’s next for the successful upstart? Friedman says they hope to expand on a brunch service that was tested with great success last summer.

Pizza Delicious also recently added another 30 seats to the 50-seat pizzeria with the addition of an inviting patio, featuring wood-slatted benches and tables and light illuminating from under its seats and rows of bulbs. Friedman looks for the outdoor space to be a additional draw.