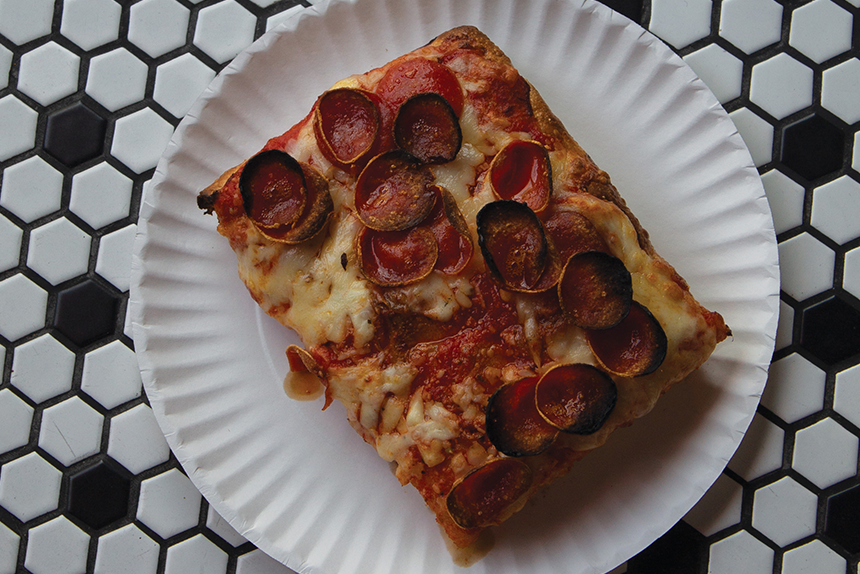 Vincent Rotolo wanted to bring a slice of Brooklyn to Las Vegas. The city’s thriving food scene exposes locals and tourists alike to a variety of world-class cuisines, and there was no shortage of top-flight pizza in town when Rotolo started planning his venture. But instead of seeing that as an obstacle, Rotolo viewed it as an opportunity.

“There were great pizza makers here already, great pizza,” the Brooklyn born and raised Rotolo says. “You had John (Arena), Chris (Decker) … Tony (Gemignani) is right up the street. They were all welcoming. These are guys who set a standard and that all pizza makers can learn from. The bar is set high here. If you’re going to open a pizzeria here, you’ve really got to bring it. You can’t get away with making a bad product.”

In that regard, Vegas somewhat parallels New York. Which may be part of what attracted Rotolo to the idea of opening Good Pie in Sin City. The challenge of pursuing perfection makes for a good time.

“We take what we do very seriously,” Rotolo says. “We don’t cut corners. We’re meticulous about doing things the right way. From closely monitoring and logging not just the temperature — but also the humidity — in our dedicated dough room, down to everything else. We want to honor and uphold the standards we set for ourselves here.”

ood Pie has a New York look and feel that guests instantly notice, even before entering the restaurant. While a gorgeous Vegas-style sign lights the way, the place is all New York — beginning with the sidewalk out front.

“I had a New York manhole cover made and installed right at the front door on the sidewalk,” Rotolo says. “A lot of people actually think it’s a real sewer cover right here. I wanted something very New York that people would notice right away, before they even come in, that establishes that feel and sets that tone that this is New York.”

Upon entering, the bar looks and feels like an old New York rail car. The finishes and fixtures certainly transport guests from the glitz and glamor of Vegas to the glory and grit of the Big Apple. But then there’s a soft and heart-warming touch patrons immediately notice. A wall lined with booths across from the bar area features photographs of grandmothers. Not just Rotolo’s, but grandmothers of employees and friends as well. The touching tribute makes for a great conversation piece. As well as a nod to Good Pie’s “Grandma Pie.”

“A lot of people learned cooking from their grandmothers,” Rotolo explains. “That’s where their love of food began, where their dedication to quality and passion for making good food the right way started. Honoring grandmothers everywhere is what we’re doing with this wall. People love it. They talk about it all the time.

“A few months ago a young lady was here eating in one of the booths and just started crying. I went to check on her, asked her if everything was okay, and she told me: ‘That’s my grandmother on the wall right there.’”

It’s with that same level of compassion and dignity that Rotolo approaches pizza making. From the aforementioned Grandma Pie to NY street slices to Detroit-style, Good Pie is meticulous about upholding pizza’s best traditions.

“When we push the dough down, we are gentle with it. We don’t de-gas it. Sometimes we keep the dough room dark. The light has a different effect on the ferment I feel like. We do a bulk ferment, or a bench rest, and I started doing a clear plastic over it so the light could get through. And then I did a black plastic over it, and I noticed that it reacted differently. The dough was lighter and airier. I don’t know the science behind it, but then I started darkening the room too and noticed a difference.”

Rotolo keeps a daily dough log where temperature, humidity and other factors are monitored and noted.

“There were no other variables other than the difference in light that could have impacted it,” he says. “Every batch is logged, and we don’t change it that much. We don’t change the dough formula, because we make five styles out of the same dough.”

Of those styles, the Grandma tends to be the most popular.

“We do a lot of Grandma slices,” Rotolo says. “It’s our No. 1 selling slice. We have 75 Grandma doughs in the rack right now, and they’ll all be gone by the end of the night.”

While Rotolo is proud of the pizza he produces and sells, he says it’s the nostalgia — the “old New York” vibe — that truly captures the essence of Good Pie. And he says the trajectory of the Vegas pizza scene is where the rubber meets the road for him personally.

“I’m proud of the pizza, yes,” he says. “But I’m proud of the culture that we’re building in this store and in this city. The pizza culture we’ve got going here in Las Vegas, it’s unparalleled in any city. Like, New York and Naples can claim the pizza theme, but no one has the culture that Vegas has right now in terms of pizza makers. No one has (John) Arena, Tony (Gemignani), Chris (Decker) all operating in their city. And we follow those guys, and those guys want us to follow. They lead us. And it’s great because now there are a bunch of other people coming up. The pizza in this city is just going to keep getting better and better. It’s just one of the things that I’m really excited about and proud of. That’s where the magic happens. There’s a whole community here. The camaraderie. Who else has that? What other community does this exist in? I worked in New York. There’s never been this amount of support and friendship in a community that is usually filled with unhealthy rivalries and competition. This is special here.”