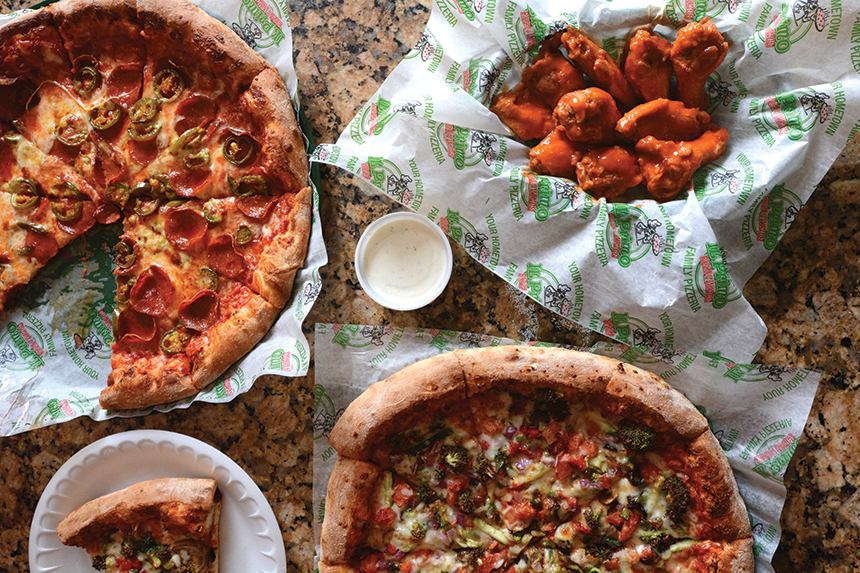 Its latest location opened in March 2019. The new North Port store is a slight deviation from the other locations with its smaller footprint at 2,500 square feet — the average Il Primo square footage is roughly 4,000 — and it has a fresh, new look.

Every Il Primo will soon join North Port with a fresh, updated look. As Pizza Today visited Il Primo in Fort Myers, another location in Naples was undergoing an interior update. Director of Operations Jonathan Schroeter lets us in on the refurbishment. “We are in the middle of refurbishing the stores and putting money back into the stores for long-term growth,” he says,  “make them little bit more modern and, of course, the wear and tear. A lot of it is the same as when the stores opened and you’re talking 10 to 15 years of some pretty decently high-volume pizzerias.”

Il Primo has encountered significant changes since its founding. Paul Conti opened the first Il Primo in Arizona in 1983, growing to three locations. But when Conti relocated to Naples, Florida, he closed the Arizona stores and opened his concept in Southeast Florida in 1999. He grow Il Primo to six locations.

Conti passed away in 2013, leaving his family to continue his legacy. It was around the same time that the position of director of operations was created for Schroeter, an Il Primo GM and veteran employee, who had risen from a counter service crew member in 2004.

Schroeter instills the principles and philosophies that Conti created so many years ago, while also bringing in new initiatives to aid employees and help the operations run smoothly.

“The three main principles for Paul were No. 1 cleanliness, No. 2 customer service and No. 3 quality product,” Schroeter says, that Il Primo carries today.

The kitchen at Il Primo Fort Myers is immaculate and well organized. Posters hang above each station aiding employees to keep the products consistent.

“We have so many stores and obviously the only way you are going to succeed with that many stores is that you find a way to control your consistency,” Schroeter says. “Make it the same. Make it as easy as possible. If you have a question about pretty much anything, it’s right here for you to see.”

With about 100 employees systemwide, taking the guesswork out of food prep is paying off for the local chain. “This is the restaurant business, it’s a given that your turnover — no matter how you treat your employees — is going to be a challenge,” Schroeter says. “It is the No. 1 challenge honestly for me. I felt it was important to create a system where someone could walk in and obviously having someone with them and training them throughout the day but once they are set loose whether that be one, two or three days, whether they should come up with a question or feel that they should just wing it, the answers to a majority of their questions is right there on the wall.

As a counter-service concept, Il Primo has streamlined its operation so effectively that during slow periods, there will often be one front of house and one kitchen employee on duty.

With seven stores, Il Primo’s general managers play a pivotal role in its success. A common bond of the pizza company’s leadership is they’ve grown with the restaurants. Managers have worked their way from the ground up.

“With our general managers and kitchen managers, we offer them two weeks paid vacation every year, medical, dental after 60 days, a very competitive salary,” he says.  Moreover, Schroeter says they empower GMs to make each location their own. “We think of them as family. We trust them 100 percent, trust their judgment.”

In fact, Il Primo applies the same approach to all of its employees. “We’re family-owned and operated,” he says. “We treat all of our employees like they are family. Me myself I’m a huge believer in the concept that if you have happy employees, you have happy customers.”

Il Primo’s menu is straight forward. “We just serve pizza, wings, appetizers and salads. That’s it,” Schroeter says. “One of the quotes that Paul said back in the day when he had the stores in Arizona: ‘you can have a menu that has 30 to 40 items and get it right 70 percent of the time or you can have pizza and wings and get it right 100 percent of the time.’ And that is what we do. We focus on the pizza and wings. It helps food costs, absolutely. It makes operations somewhat easier.”

Everything is made in house. “We make the dough in house — a three-day cold ferment,” Schroeter says. “It’s a much better product. Let the yeast do its thing. Don’t rush it.  We make the ranch, bleu cheese, the pizza sauce, the wing sauces. We pretty much have nothing pre-made and sent to us.” Even cheese is shredded in house.

Wings are huge sellers at every Il Primo. “We go through 10,000 cases of chicken wings a year,” Schroeter says.

Traditional pizzas are always most popular. The vegetarian, the Hawaiian and the bacon cheeseburger are hot specialty pizzas.

Families are a big draw for Il Primo. Every Wednesday is Kids Night — $5 mini pizza, cookie and drink. Once a week, Captain Black visits each Il Primo store with face painting, balloon twisting and a movie.

Taking a versatile approach to marketing, Il Primo incorporates traditional opportunities, like box toppers, direct mail, radio and scoreboard ads, as well as digital options, like social and SMS marketing. “We do have a (SMS) platform we use with roughly 3,000 subscribers,” Schroeter says. “Whatever different events, time of the year that are going on, I cater that to the text blasts and send it out. We usually do once a month. I try not to saturate it.”

Each location hosts Spirit Nights for area schools. “We’re huge in the community,” Schroeter says. “Every year, we do free pizza to veterans on Veteran’s Day. It’s a good way to give back to the veterans. That’s one example. Teacher Appreciation Week, we probably donated 400 pizzas to them. Every community is a little bit different. Each store is its own individual, the way I see it, it’s always different. If I had to guess, we donate probably 5,000 pizzas a year. We’re also very active in the youth sports.”