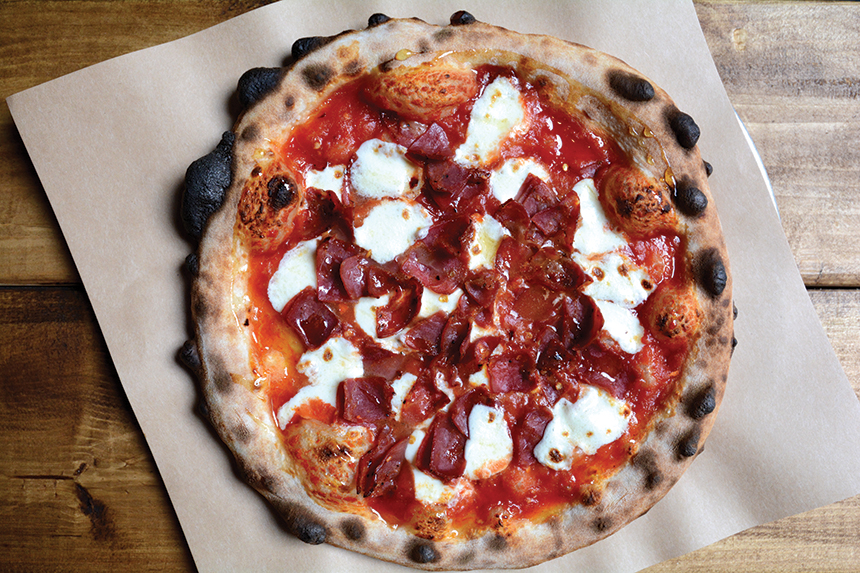 Moving with the times

Running a restaurant during a pandemic certainly tests one’s ability to adapt on the fly.

As information, safety protocols and local guidelines change frequently during the COVID age, those who are able to make decisive and quick judgments and roll with the punches are the ones who are coming out on the other side less scathed.

As the cliché goes, the only constant is change … and that has never been more true.

Anthony Lusiak opened Mac’s Dough House in Louisville, Kentucky, in October 2018. Less than a year later he was toying with a new opportunity to open a second pizza spot within an existing brewery. He came to an agreement with the owners of the brew house (Mile Wide Beer Co.), and in July 2019 Mac’s at Mile Wide was opened. This location had a different oven, offered a different style of pizza and represented an exciting new chapter for the young pizzeria owner. And then came the virus.

“It definitely changed everything,” Lusiak says of COVID-19. “We hadn’t been open at Mile Wide long and then everything shut down and we had to stop serving for a little bit.”

Though he worked quickly to adapt to the new normal and figure out a different way of doing business, the days of large gatherings in a restaurant or bar were put on hold. With one location counting on that bar traffic, and another counting on dine in, Lusiak had to step back and make some evaluations. Ultimately, he decided to go in a different direction entirely with his sit-down spot (Mac’s Dough House is in the process of converting to a new, non-pizza concept), but Mac’s at Mile Wide is very much focused on turning out Neapolitan-style pizzas for the in-house beer customers (the Brewing Co. is back open and serving patrons under new Kentucky-mandated social distancing/headcount restrictions).

“This style of pizza isn’t really very well suited for takeout,” says Lusiak. “It doesn’t travel well. As soon as they were allowing restaurants to re-open and operate at 33 percent, we got right back to it. It was slow going for the first couple of weeks, but the brewing company has a lot of loyal followers. And, honestly, we have a lot of loyal followers, too.”

Changing the concept of his original restaurant wasn’t an easy decision, either.

“COVID has impacted us quite a bit there,” Lusiak says. “And there are probably 10 or so pizza restaurants within a 10-mile radius of us there. We did okay with carryout, but it was definitely a big hit for such a large restaurant. But we’re grateful to be back up and running here at Mile Wide and there were a lot of people excited to see us get back open.”

Operating within a small footprint that requires minimal crew (some days it’s just one pizza maker, others it’s two), Mac’s at Mile Wide is an ingredients-focused and labor-efficient business. Additionally, the brewing company put some large “beer tents” in the parking lot right outside the door so clientele could enjoy their beer or pizza outside during the warm weather months and better social distance.

“The tent was a great thing they wanted to do to expand, and that really helped us out.”

On our visit to Mac’s at Mile Wide in July, Lusiak knocked a few pizzas out for us in his kitchen. He starts with a 280-gram dough ball (00 flour, water, salt and yeast) that he stretches to 9-10 inches. The dough is cold fermented for an extended period — Lusiak says he likes them best at four to five days.

“They’re good at two days, but at four to five days they definitely have a beautiful leoparding and I can notice the difference,” he says.

He can also notice the difference in stress on the body during the pandemic. Restaurant kitchens are already a hot and physically grueling place to work before adding in the mask requirement.

“It’s definitely challenging,” Lusiak says. “It’s not something any kitchen worker ever expected, but we we’ve gotta do what we’ve gotta do for everyone’s safety. The good thing is that our oven holds its heat so well. You don’t really get any heat off of it unless you’re directly in front of the chamber opening to load the pizza. You could pretty much hug the oven and not get too hot.”

Lusiak keeps the oven floor around 700 F, which he says makes the ceiling around 900 F. His bake time is near three minutes.

“It’s a style of pizza that needs to bake fast at a high heat,” he says. “We also do wings, pretzels and some small bites and roasted vegetables out of the oven. We make a beer cheese that we serve with the pretzels. They’re a pretty big seller. They’re actually one of our biggest sellers. So we aren’t limited to just pizza out of the oven even though we have a small kitchen with minimal equipment. We try to offer as much menu diversity as we can with what we’re working with.”

The Mac’s at Mile Wide menu is pretty streamlined, but Lusiak says he’s added some specials recently that he felt would appeal to customers seeking something on the go. But the biggest addition, he says, has been using an electronic ordering system that utilizes QR codes and allows the restaurant to text the customer when their order is ready.

“We’ve added some things to the menu, and one big thing that helped us the most is that our system has the ability to do online ordering,” he says. “Before I had to have someone take an order and come hang it in the kitchen. Now it all comes through electronically and I don’t have to swipe a debit or credit card, and we can send them a text when their order is finished. I have been really pleased with that and how it has worked for us.”

Mac’s customers appear pleased as well, though Lusiak does miss the days when it was easier to read a patron’s facial expressions to know you’re on the right track.

“It’s definitely a challenge because you do like to see that smile and see how people are viewing your product,” he says. “But even though it’s a little bit difficult, people have been very accommodating and understanding of the new procedures that are required to be in place, and overall it’s been pretty good so far.”

While he has no idea when things will return to normal again, Lusiak says the adaptations he and other pizzeria owners have been forced to make will ultimately forge stronger businesses.

“You analyze your systems like never before,” he says. “You scrutinize everything and get lean and don’t keep what doesn’t work.”