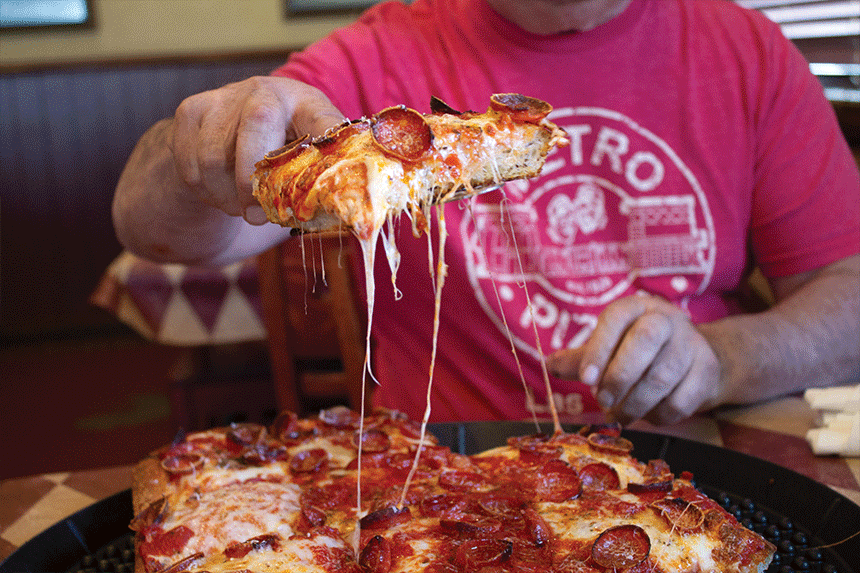 Las Vegas’ Metro Pizza has been evolving from the start, and that has led to long-term success

What would it take for you to pack up your belongings and move all the way across the country to open a pizzeria in a place you’ve never been? In 1980, after receiving a degree in film, a young and enterprising John Arena did just that.

“I wanted to do something that resonated with me and was meaningful to me,” he says. “I realized there were a million other people graduating from film school who were more talented than I was, and they weren’t getting a job either.”

He adds: “by the time I was graduating from college, I realized I really wanted to be a pizza maker. I grew up in a pizza family. My family owned some pizzerias on Long Island. My dad, my mom, my uncles and aunts all worked in pizzerias. Most kids devalue what their parents are doing until they grow up a little bit. When I started to grow up, I realized pizza is the coolest thing. Everyone knew my family, everyone comes to our neighborhood pizzeria. We are part of the social fabric of our neighborhood, and I started to see the value in that. I started to respect the value in that and to respect the responsibility of crafting food with your hands that becomes part of someone’s body.”

It wasn’t long after Arena got involved making pizzas before an unusual opportunity cropped up.

“We found a guy that had a pizzeria in Las Vegas that he wanted to sell,” Arena says. “He was a New York guy and he didn’t want to train anybody. So he advertised for one day in an Italian language newspaper in New York. One of my uncles saw the ad, cut it out of the newspaper, and threw it down in front of me and my cousin because we were always talking about getting out of New York and opening our own place out West. He said, ‘Are you going to talk about it, or are you going to do it?’ We called the guy up and he was willing to hold a note if we gave him a small down payment. So we came out here, gave the down payment, he handed us the keys and his address and said, ‘Send me my check. This is where I’ll be.’ We never saw the guy again. There was no contact other than mailing him a check every month until he was paid off. He wanted out of Las Vegas and he wanted out fast.”

That pizzeria eventually turned into Metro Pizza, the renowned juggernaut that’s so well known throughout our industry today. But, first, there were lots of preconceived notions to get out of the way.

Arena says it did not take him long once he was in Vegas to figure out that the pizza he grew up on wasn’t the only type of pizza out there. In fact, he can tell you exactly when he figured that out, nearly to the minute.

“I recall exactly when I realized it,” he says. “I realized it when I opened my doors on my first day, June first, 1980, Sunday, at 11 o’clock. The first customer who walked in was from Philadelphia. He asked me if I could make a tomato pie. I said, ‘What’s that?’ He said, ‘That’s real pizza.’ I was taken aback. In my eyes, like every New Yorker, the sun set and rose with New York and New York pizza was the defining pizza of America. The very next customer that walked in the door right behind them was from Detroit. We were like, ‘Wait a minute. Something’s going on here that we’re not aware of.’

“Thankfully we were young enough and flexible enough to realize we’d better figure some things out because people from all over the country and all over the world would be coming to Vegas.”

That’s how that pizza establishment, which he and his cousin had named The Original New York Pizza, grew into Metro.

“We immediately realized we needed to change that name because we were excluding styles from other places,” Arena says. “We immediately started the transition. It took us a few years, but we eventually changed the name to Metro Pizza, the impetus being that we were representing pizza styles from a variety of metropolitan areas.”

Ever since taking that first step in the process, Metro has been on a continuous path of evolution. That, says Arena, is key to its survival and its ability to thrive for decades. After all, he says, pizza itself hasn’t stood still. It, too, has drastically changed.

“Even the guys that claim to be purists, are they really doing what they did 75 years ago?” he asks. “Absolutely not. Because the ingredients themselves have changed. The thing that’s really important to remember, in my opinion, is that we have all these people in certain regions of the country that proudly state their pizza hasn’t changed in 50 years. Well, that’s great. Congratulations. You’ve built a museum. I’ll probably get hate mail over that, but if you haven’t changed your pizza in 70 years … your customer has changed. What they’ve been exposed to and what resonates with them is totally different. That’s why it’s so important to go to Pizza Expo, because you need to get that perspective.”

Fifty years ago, says Arena, pizza “was craft, but there wasn’t a lot of science and precision or evaluation. If you were lucky enough to be mentored by somebody who made a good pizza, then you were lucky and you made good pizzas, too. There was no intentional variation or experimentation.

“The fermentation times were shorter because we didn’t have the storage space because pizzerias were tiny. Why did Lombardi’s use a coal-fired oven? Because that’s the type of oven that was available in that building. That’s the major difference between then and today. Today there are conscious choices being made that weren’t available to the older pizzerias. Back then the choices were dictated by the environment and accessibility.”

What spurred that change?

“One of the things that happened is exposure,” Arena explains. “If you lived in New York 50 years ago you weren’t even aware there was another style of pizza. There was just pizza made in New York and that was it. Now we have places in New York that are thriving on other styles of pizza, such as Detroit-style pizza. Just the spread of information opens up new opportunities and new perspectives on what pizza really is. It’s not just in the United States, either. Pizza has changed in Italy, even, too.”

How has Metro Pizza been able to remain relevant in the industry for so long?

“It’s about staying connected,” Arena says. “When I’m in the restaurant, I’m often still making pizzas. And you see that with people like Tony Gemignani all the time. Go to San Francisco and go into his place and he’s covered with flour and sauce. He’s the most talented pizza maker in the country and one of the most knowledgeable pizza makers in the world and he’s making pizzas. Not because he has to, but because he wants to and that’s who he is.”

When asked if it ever seems rote, if whether his 81st pizza of the day seems less than enjoyable, Arena was quick to answer.

“I’m mindful that every time I take a dough ball out of a tray, I have an opportunity to do something good or something not so good,” he says. “Not only am I feeling the dough and looking at the dough, I’m also mindful of the fact that what’s going to happen to that dough is the sum total of who I am at that exact moment. I’m thinking about that. I’m thinking about how I transmit what’s in my mind and heart into that particular pizza.”