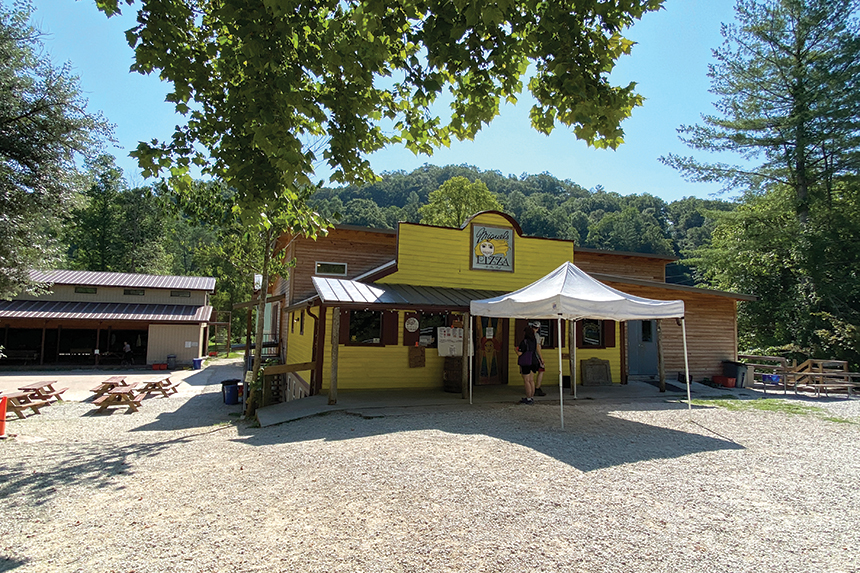 Miguel’s Pizza is synonymous with its region of Eastern Kentucky.

The unique pizzeria has been a pizza and rock-climbing destination at Red River Gorge since Miguel and Susan Ventura opened in 1983, first as an ice cream shop. They quickly transformed the old 1930s general store into a pizza restaurant.

Today, Miguel’s looks seemingly the same until you walk to the side of the vivid yellow building and see the 2,000 square-foot extension that was added a few years ago. “That was the goal with the addition — to emphasize the original Miguel’s. And when you come through the front door, it feels the same and you do not lose that feel,” says general manager Dario Ventura.

The feel that Dario refers to is a funky mom and pop pizzeria hangout. It is eclectic and artsy. In, fact, Miguel is an artist. His brightly colored carved work and paintings can be found from the moment someone walks up to the handcrafted front door with its hand-painted sign above. Miguel’s artistic mark is displayed throughout the restaurant.

Each year, the Ventura’s reinvest in the business with updates. The expansion was the biggest yet. They did a remarkable job blending the old and new spaces, giving guests the reassurance that they were stepping into the Miguel’s they loved, just a new and improved version.

The new space includes a large dining room and a large kitchen with two pizza makelines for peak times, a massive rotating deck oven and combination walk-in/reach-in refrigerator. A basement area with additional seating was completed this spring.

Since its inception, Miguel’s has been the gathering hub for rock climbers. The Ventura family have expanded the grounds to include a campground with pavilion and a shower house and a top-of-the-line rock climbing shop. “They are the ones that really built this place,” Dario says of the international climbing community. “We’re doing great now and this place has boomed in the last 10 years, I would say. Prior to that, this was a bit of a ghost town here.”

Even Miguel’s workforce is made up of climbers, almost exclusively until the past year a handful of locals have been added to help man the shop.

“Our base is climbers. They are the ones that come every day. They are always there for us. We revolve around the climbing community.”

Climbers were the driving factor behind Miguel’s varied menu. Its diverse ingredients list is a surprise find in rural Kentucky. It boasts over 40 meat and veggie toppings from anchovy, chorizo and roast pork to avocado, sweet potato and black beans. The cheese selection is even impressive with three mozzarella choices and cheeses like feta, ricotta, provolone and non-dairy. There are also a half dozen sauces. Pizzas are 16-inch and can be purchased as half or whole pies.

Dario says they don’t feel a need to advertise that the tomatoes, basil, zucchini and green peppers are all locally grown by a neighboring farmer. The local focus with scratch products is evident in its pizza quality. Dough, sauces and bread are made in-house and cheese is shredded on premise.

Miguel and Susan’s approach to food fuels the menu. “They cook and it’s very basic food,” Dario says. “It’s good food so they don’t try to reinvent the wheel too much. I think that transferred over to the restaurant. If it starts out good, it’s going to end good. We’ve always went with that as the mindset.”

It’s a new dawn at Miguel’s. Dario and his brother Mark grew up in the pizzeria. They both left to go to college, Mark studied business and recently returned to Miguel’s, while Dario wanted to seek out other opportunities. “Actually, going to school and taking business classes I realized how much I like the whole family business aspect of things and what a good thing I had,” Dario says of his decision years ago to return to the family business.

The next generation has stepped up at Miguel’s. Dario runs the day-to-day and Mark handles the financials. “Now he has kind of taken my mom’s job but with a more new-school approach with apps,” Dario says of his younger brother. Miguel is still often in the kitchen tinkering with the pizza sauce.

It’s a family business in the truest sense of the word. And that business is in the midst of change. Just as they christened their new building, the liquor laws in the area changed. “That was a real hard transition for us to serve alcohol. It was the transition of our staff being comfortable serving alcohol because of all of the liabilities they throw at you with serving alcohol and the responsibilities you take and us not wanting to change that atmosphere,” Dario says. “We don’t want it to feel like a bar. You have to kind of keep that balance.” Luckily with purchase limits and using a single service line, the pizzeria has a built-in moderation to keep its family-friendly setting.

Miguel’s Pizza closes through the winter months from December 1 to March 1. But with the expansion, the Venturas experimented with staying open through the winter last year. “We just stayed open on the weekends,” Dario says. “It was a huge success. It was surprising. Limited hours, core crew that stuck around. I mean, we weren’t slammed but it was worth it.”

Then, enter the COVID-19 Pandemic forcing the restaurant to shut down for almost three months during Miguel’s busiest season of the year. Miguel has always applied a steady approach to improvements and business. “That mindset has saved them in stuff like COVID that’s hit us because you know we’re not in debt to our ears,” Dario says. “We’re stable. You can weather stuff out if you’re not being sucked dry and you are doing it slow and organically.”

When Miguel’s reopened this summer, the systems were completely different. They switched to a 100-percent to-go model and launched an online ordering system. “Of course, there are increased numbers but our cost of staff is way up because we have to staff a lot more to keep everything sanitized and keep the process more friendly,” Dario says. “Prior to that we are the most minimalist place. Your pizza comes on a tray. You get forks if you want them. There is not much to it. But now everything is packaged. The price of products is up a little higher just because everything is to-go.”

Even amidst the three-month closure, Dario says, year-end sales are on pace to match last year. Miguel’s is churning out 700 to 800 pies on its busy nights and that’s exactly what the location was built to do.

Though Miguel’s has weathered COVID-19 better than many, Dario longs to get back that Miguel’s vibe. “The one thing that COVID has really done is business is still good, but it definitely kills the ambiance and community feeling, especially this place,” Dario says. “You come here on a Saturday night it’s glowing. That place would be full of people having a good time.”