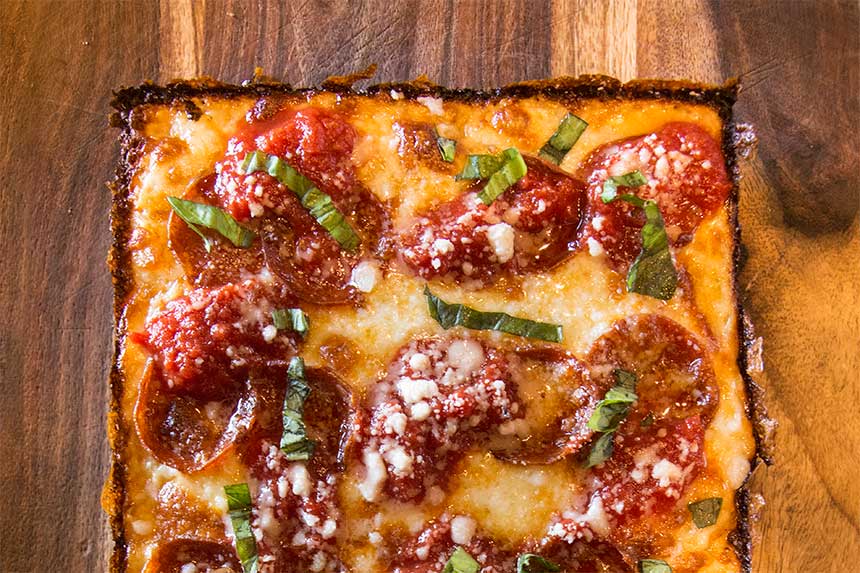 Pizza Today on the Road: Pangea Kitchen, Evansville, IN

Pizza Today on the Road: Pangea Kitchen, Evansville, IN

Pangea Kitchen is a restaurant reminiscent of what you might see in a trendy large metropolitan district. It’s a pizzeria meets world market meets pastry shop meets Thai restaurant.

It’s a piazza of world flavors in a southern Indiana city of just over 100,000 people. You won’t find Evansville on culinary maps of American cities, at least not yet. But Pangea Kitchen may change that. “(Evansville) is a market that is very driven by chain restaurants,” owner Randy Hobson says. “We are starting to see that change. Pangea is a small part of that and we are proud to be that and bringing something different.”

The restaurant is a hidden gem in the back of a nondescript commercial center. Walking through Pangea’s doors for the first time has surprised many customers. There is nothing like Pangea in its entire region. It’s a large space (over 5,000 square feet). A perimeter of multiple open kitchens divided into specific culinary cuisine wraps the dining area. At the entrance is an espresso bar and complete pastry operation with a case filled with macaroons, crème brulee, tarts and tiramisu, alongside a dozen house-made gelatos, sorbettos and gelato cakes. On the opposite side of the entrance is home to its authentic Detroit-style pizza prep and deck ovens. Down the line is a certified Neapolitan pizza make line and wood-fired dome oven next to a Thai food station, deli and market area.

It’s an interesting dining concept centering on food as a destination. “Pangea was born as a microcosm of Eataly with a lot of Chelsea Market sprinkled in and Asian markets throughout the world that created something that was different,” Hobson says. With annual sales just under $2 million, he has redefined what’s possible in a smaller market.

A retired corporate professional, Hobson spent 25 years traveling the world for an Evansville-based plastics company. He sought to bring the global cuisine he had experienced back to his hometown. But, he set out to do it with authenticity. That’s why each area of the restaurant has a young chef at the helm. Eric Luna is a certified Pizzaiolo Verace from Vera Pizza Napoletana. World Pizza Champion and Detroit-style pizza consultant Shawn Randazzo taught the Pangea crew how to make Detroit-style pizza. Its Thai kitchen is run by Bangkok, Thailand native Wanphen McDonald, who holds two prestigious culinary arts degrees. Pastry chef Sarah Bruggeman was formally trained at nearby Sullivan University.

Hobson knew he wanted to introduce Neapolitan pizza to the Evansville community, a style he fell in love with on a trip to Pizzeria Bianco in Phoenix over a decade ago. He developed his pizza-making forte using his backyard pizza oven with friends and family.

During Pangea’s construction, Hobson set up a test kitchen a few doors down from its current location to work with his team on perfecting the diverse menu. Building out the former home retail store took a year and half. Hobson also opted for new equipment that could be showpieces in the open kitchens.

From the onset, Hobson says it was a bit of a culture shock for Evansville residents. Some people were intimidated by the types of food on the menu and in the market. “In the beginning, it was all about educating people about what is a Neapolitan pizza,” he says. Hobson and his chefs did guest appearances on local media programs to share their knowledge and get people excited about Italian and Thai food. Pangea has also led mozzarella-making demonstrations at organizations and schools and hosted food pairing events.

The education component has allowed Pangea’s passionate team to shine, not only teaching their craft but also learning and growing within their profession. “I love to see these kids grow,” Hobson says. “The ultimate for me in 10 years is that those guys are running kickass restaurants around the city.”

Hobson has built a culture centered on the growth of Pangea’s more than 30 employees. “The foundation is one of challenging our people and giving them a lot of freedom to be creative and not be afraid to fail,” he says. Three components to Hobson’s approach includes education, exposure and investment. Team members have made field trips to Brooklyn, New York. Pangea chefs take culinary excursions and participate in education programs. Chef McDonald was recently chosen to take part in a five-day exhibition in Bangkok as Sous Chef to Michelin Star chef Andy Yang. Hobson says experiences like these keep his team challenged.

Closing Sundays and Mondays is also great for the Pangea team, giving them a well-deserved break and avoiding burnout.

Why is Thai and Italian at the heart of Pangea’s global menu? “Putting together Thai and Italian is probably not the subscription of most people but the passions in those foods, in my opinion, there are not two countries in the world that have the amount of passion and how food is a key part of their life and part of the traditions,” Hobson says. He refers to Pangea’s focus as “global soul food.”

The Neapolitan pizza menu features a few of the classics along with creative pies like The Knuckle Ball with sliced Trinity meatballs, fresh garlic, provolone, and finished with super dolce “Trinity” meatball sauce, Parmesan-Regiano, and hot honey. A top-selling wood-fired pizza is the Pistachio with mozzarella, sausage, pistachio pureé, basil and hot honey.

Asian appetizers, including spring rolls and steamed shrimp and pork dumplings, contrast other starters like the Charcuterie Board or Burrata Toast.

“I know we’ve captured them when a group comes in and they order a Detroit and Neapolitan and Pad Ke Mao and some burrata or spring rolls, saying, ‘Let me try that,’ ”Hobson says. “That’s the way Thai people and Italians eat.”

In the summer of 2017, Pangea added an attached bar area and private dining space. The bar features eight taps of unique and interesting beers and eight craft cocktails. Hobson says the bar has also provided a contrasting dining experience to the large open hall, making the bar a great date-night spot.

The private room allows Pangea to host events that are interactive with the chefs. Hobson says the space gives them the opportunity to provide eclectic five- and six-course meals. It’s one of the biggest growth areas for the restaurant, along with business travelers.

What’s next for Pangea? Hobson has hosted pop-ups at the restaurant to test ramen dishes with plans to open a ramen shop in downtown Evansville.