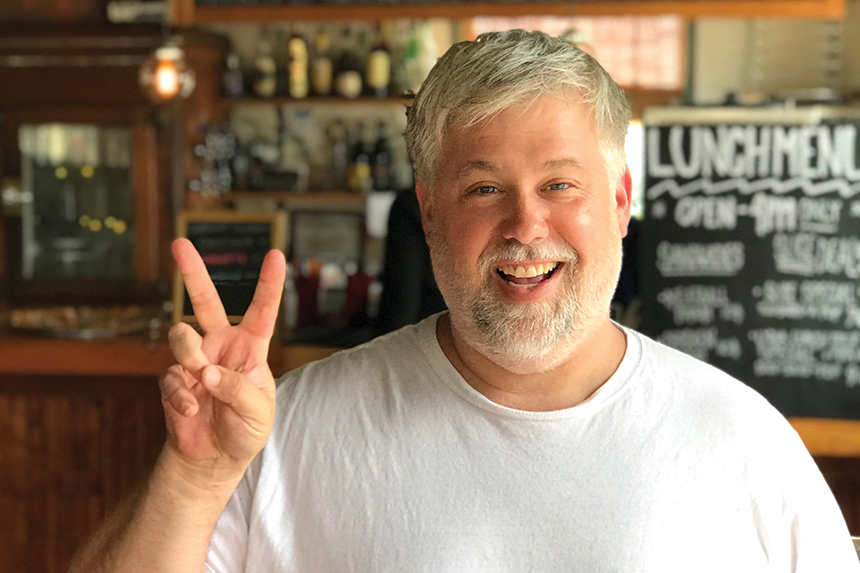 Pizza Today on the Road: Pizza Jerk, Portland, OR

Pizza Today on the Road: Pizza Jerk, Portland, OR

With a name like Pizza Jerk, you better have the attitude and the pizza to stand behind it. Luckily, this two-unit pizza company in Portland, Oregon, more than holds its own in a city built on good eats.

Here the pies are large, crispy and never perfect, and yet Connecticut native Tommy Habetz has crafted pizza much like he grew up with. As a former sous chef for celebrity Mario Batali, Habez learned a healthy respect for individuality in the kitchen –– and pizza. He recalls first obtaining his drivers’ license and commuting to New Haven, where he visited famed Frank Pepe Pizzeria Napoletana.

When he opened his pizzeria in Portland in 2015, he partnered with Ben Hufford and J.B. Tramholm. “We really went out on a limb to try to do this,” Habitz says. “We’re just lucky that people are enjoying it, too. There’s so much that I learned, too. People in pizza –– as you know –– can be secretive about conditions and styles and everything.”

Habitz learned quickly that to succeed, you have to form your own recipes and not rely on the those of others –– even if you have worked in other high-dollar iconic pizzerias in town.

“There’s definitely a competitive spirit here, but there’s also a really great spirit of community here,” Habetz says. “What I’ve realized is that pizza is one of those things  … that you just hit a wider group of people. Everybody loves pizza. … It’s one of those things that you can eat every day –– or at least a few times a week.”

Just days after being named one of the best pizzerias in the nation and six months after opening, the flagship restaurant suffered a debilitating fire in its dining room that sparked from an electrical fire outside and shuttered the restaurant. “The whole dining area was gone,” Habetz says. “It was intense. … It’s a funny thing because it was a blessing and a curse for sure. I was walking up the street –– I was just down the block –– and I see the whole restaurant on fire. I almost started crying. What do you do? I really thought that was it.”

Luckily, the kitchen remained completely untouched except for some smoke damage. “Our insurance agency was great,” Habetz says. “We worked with them; my partner Ben is an architect and a contractor. We took over the project and it was one of those things that when we opened (originally) it was on a shoestring budget. Actually, we were able to do things with a nice touch like a new dining room. We were down like three or four months. It was pretty grim at first. I didn’t think there was any way we would be able to rebuild it, and it seemed like such heavy damage.” During the downtime, they did some pop-up events to remain top-of-mind, and to the delight of Portland residents, the pizzeria did reopen, and later a second unit was built.

Cheese and pepperoni is the top seller, as it is in most locations. The second top seller is the “It’s Always Sunny in Cully”, which features pepperoni, pineapple, hot peppers, basil and local honey (an 18-inch thin crust is $29).

The use of a dough press helps thin the dough. And while it is not always preferred in pizzerias, “we have to look at all the traditions of pizza and then kind of throw it out the window a little bit because … what it does is it activates the dough and it’s perfectly ready to go now,” Habetz says. “We really have tried everything as far as how we top the pizzas, how we dress the pizzas –– everything has been tried here. And we’ve changed things along the way. We were using shredded mozzarella for a while and we were doing sauce first. That’s probably the pizzas you’ve tried. And it was really delicious that way and really great. I started making some pies where I’d get in a brick of mozzarella. … It’s kind of a Jersey/Connecticut style on how to dress the pizza is to put the cheese down first. We started to experiment with that and decided to switch over because we all really liked it and thought it tasted better.

“I knew I wanted to do a Poolish starter with a pre-ferment and then finish the dough 14 hours later. (He even went so far as to test the dough on his home grill at night.) The only thing we do that’s different than a lot of people is I put some apple cider vinegar in the dough to kind of help relax the dough a little bit more. If there was any ‘tang’, that would be good. But most of the tang is from the pre-ferment.”

He admits they don’t measure ingredients, although they should. “We measure every other way,” Habetz says.

Habetz and his crew got friends in the restaurant to blind test as many kinds of mozzarella as they could get their hands on and ended up with a non-traditional Wisconsin offering that set their pizza apart from their competitors. They also use Pecorino and Romano to create unique flavor profiles. “All the pies I grew up loving were made with Pecorino,” Habetz says.

The electric deck ovens bake in five to eight minutes, and the pizzaiolos use a puff of air to keep the dough from sticking to the floor of the oven.

Cast iron pizzas are also available, modeled after the Greek-style pizzas he had in Connecticut. “Everyone around the country has some sort of pan pie, whether it’s Little Caesar’s or something really great,” Habetz says.

Some sandwiches and pasta dishes like eggplant Parmesan round out the menu. “I knew there were those people who wanted those classics,” Habetz says. Since the fire, they’ve streamlined their menu to what sold the most. “Everything that was the most labor intensive was selling the least,” he says.

Aside from its regular menu are novelty items like alcoholic slushy machines and an ice cream machine with eight syrups that give them a leg up from their competition (Tuesdays are free ice cream day). They rotate frozen drink offerings about weekly in two of the four machines, with margaritas and piña coladas always available. Slices are offered, but are reheated behind the bar, leaving the kitchen free for whole pies.

Delivery is available through third-party companies, giving employees the chance to focus on what’s in house –– or even outside, where they cultivate many of their own ingredients in a backyard garden that smells divinely of basil.

Though the company’s second unit was highly anticipated, Habetz and company took their time getting it just right. The store opened last summer in what had been Habetz’s former sandwich shop in Portland’s Buckman neighborhood. It seems not even a fire can slow the Pizza Jerk team down, and that just gives Portland one more leg in up the pizza game.