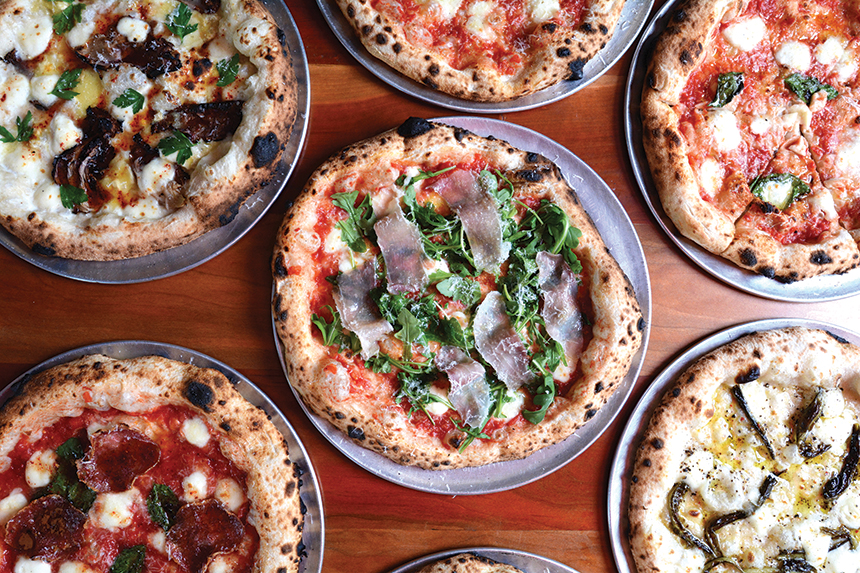 Max Balliet dreamed of opening a Neapolitan restaurant since he was teenager. A decade and a half later, Pizza Lupo was born with authentic Neapolitan pizza, fresh pasta and an atmosphere befitting the streets of Naples.

After the life-changing trip, Max began working in restaurants with wood-burning ovens, learning from classically-trained chefs and advancing to a sous chef position in Louisville, Kentucky.

At 25, he veered in a completely different direction and started a taco food truck. “It was an opportunity to be my own boss, be the owner of a business with the lowest overhead I could figure out,” he says of the Holy Mole truck.

This was at the genesis of the food truck movement. “At that time in Louisville, there weren’t any other food trucks, he says. “There were a lot of legislations and we sat in on a lot of city hall meetings to do all the legwork to get the laws written on how they could do it. It definitely formed how I look at business and dealing with the city and communities just to do what it is that you want to do.”

But, in the back of his mind was that Neapolitan restaurant. He teamed up with his sister Sarah (Balliet) and her husband Adam Turla to find the perfect location and open what would be named Pizza Lupo. Sarah and Adam are also members of the touring Indie rock band Murder By Death.

Lupo is the partners’ first venture into restaurant ownership. While other locations didn’t pan out, there was something about a circa-1860 brick house off the beaten path in the Butchertown neighborhood. “It’s tucked away, and we are literally absconded by this 10-foot flood wall,” Max says. “When I first laid eyes on it, I said this is a spot where if we are going to do any business out here, we need to have something different. This needs to be a destination. People are not going to go to a destination location without a purpose so we need to throw out the idea of doing anything that anyone can get anywhere more convenient… If there is a destination concept that I can put into this location, it’s Neapolitan pizza.”

The Balliets and Turla undertook a complete renovation in 2016. “When we bought it, it had been converted into an art studio, but it still retained all the features of the house,” Max says. “We replace every floor joist in that building, took them out and made the bar out of them and tried to reclaim all the wood we could.”

During the buildout, they paid particular attention to the sound to create that intimate atmosphere they wanted. “We had a buddy who is a sound engineer build these baffles that we have all over the ceiling,” Max says. “It was just night and day. You could tell the difference in the echoes and just the coziness of the room.”

After a year-long renovation and community-wide anticipation, Lupo opened to crowds of diners to its 75-seat dining room. Max handles the day-to-day operations of Lupo. He says, they fine-tuned everything for the opening to be ready for the rush. “The biggest key to a successful opening is to expect there to be a crowd and know how to handle it,” he says, adding that the opening went seamlessly.

Lupo’s opening menu of Neapolitan pizza and seasonally-focused pasta dishes was a hit in the Louisville market, not accustomed to Neapolitan pizza. A big key to its initial success, Max says, was “guiding people and letting them know this is a little bit different than what you are used to.”

Its focused pizza menu has less than 10 pies. The Margherita is always popular. A local hit is the Sting Like A Bee with sopressata, spicy local honey, tomato, fresh mozzarella and basil. White pies include the Moonchild with Taleggio, potato, Moroccan olives and an oyster mushroom béchamel.

Max mixes up the pizza menu with seasonal specials, like the Salsiccia pie with fennel sausage, anchovy rapini, buttermilk ricotta and mozzarella.

Throughout the menu, high-dollar ingredients can be found, from oysters on the antipasti menu to sopressata and n’duja on the pizza menu. “Expensive ingredients, you just have to know how to price it and you have to know how to incorporate it into a dish,” Max says. “With proteins on pizza especially Neapolitan style, less is more.”

The presentation of every menu item is precise and beautiful. Lupo is very strategic about its social media. Most posts are dedicated to jaw-dropping food photography, behind the scenes kitchen video and a focus on new food and beverage items.

The intricacies of Lupo’s scratch menu excites its 20-member team. The employee culture is engaged and educational. “I feel so honored and lucky to have the people I do,” Max says. “We have folks that genuinely see what we are doing and appreciate it and get excited about it.

“That’s a dream come true to be in an environment of like-minded people that want to learn and grow together,” he says.

Amidst the COVID-19 crisis, Lupo has temporarily closed after shifting the Neapolitan dine-in concept to takeout only. “We had some long conversations and we decided to completely shut down,” Max says. “It’s such a heartbreaking thing to do. It’s something I never thought we would face this year completely shutting down my business. It’s my baby. We’re making plans for when this is something in the past. (Right now), we are biding our time.”

Max says, he misses that family. During the shutdown, the restaurant has operated as a grocery for its employees who have been laid off.

At the beginning of May, Kentucky restaurants were still restricted to carryout and delivery only. Max says, “I think the reality is that nobody knows right now because it’s uncharted waters.”

As with many dine-in focused restaurants, Max waits. “Going forward depending on what they are saying is the safest way we can do it, we’ll operate business in that way first and foremost.”

As the restrictions subside, Max says, “I’m excited to get back to work. I think like everybody is. Let’s take this time that when we are through this, let’s take everything for granted a little bit less.”