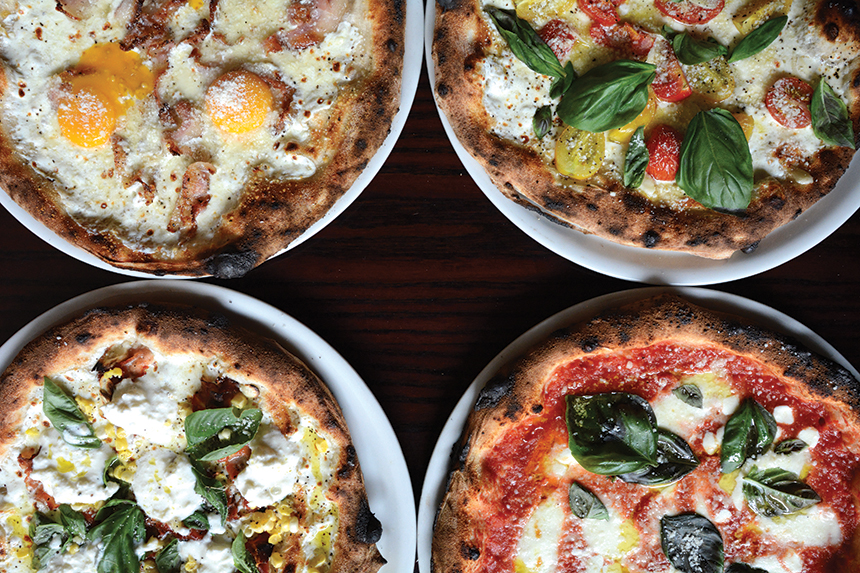 Pizza Taglio’s high ceilings are perfect for its wood-fired oven, and both help keep the restaurant afloat in a high-rent district of Pittsburgh. The city’s gentrification has made the dining scene more competitive –– so much so that Pittsburgh native Tony Giaramita’s parents own local institution La Tavola.

“I wanted to branch out and do something different,”Giaramita says. He was miserable as an attorney, he says, and gave himself one more year before he’d try his dream job –– opening a pizzeria. That would make him a third generation pizzaiolo after his grandmother and father both owned successful pizzerias.

He opted for a Roman-style pizza because he didn’t want to have to follow –– or compete –– with his family.

After visiting Paulie Gee’s in Brooklyn, he teased his sister for ordering a pizza with hot honey while he ordered a classic margarita –– but after trying the pie he said, “I just don’t want to do pizza al taglio. I want to do whatever this is, whether you’re calling it neo-Neapolitan.”

He studied with a Roman pizza maker and now uses a variation of the recipe he was taught.

“Our pizza is ‘Rome-inspired,”Giaramita explains. “To us, that means the history and the food culture of Rome, and the commitment to tradition, but at the same time Romans are more playful with their pizzas. It doesn’t have to cook in 90 seconds. You don’t only have “to make Margarita marinara … you can do whatever you want.”

Giamarita has spent a lot of time in Rome, “and the most popular form of pizza that’s coming about in Rome and in most pizzerias that are opening are this uncharacterized neo-Neapolitan where they cook in three minutes instead of 90 seconds, so the crust develops nicely … and you can put stuff on pizza, like ramps –– anything you want basically. In Rome, there are the classic Roman flavors which are pig fat, chiles and Pecorino cheese. And from that you can start to make Carbonara, Amatriciana (sauce), if you add the fat its alla Grecia … A lot of our pizzas started with that combination.”

When he first started making pizza in Pittsburgh, he had trouble even sourcing guanciale  –– the jowl of the pig –– and “now we go through 10 pounds a week,”Giaramita says.

“Our focus has always been on just trying to make better, tastier pizza without being restricted” by traditional pizza rules.

“It’s not that we’re spitting in the face of the tradition because to be able to make neo-Neapolitan, you have to know how to make Neapolitan,”Giaramita says. “To be able to make Roman, you have to understand proper bread making, so we’ve kind of mixed all of these (methods) together. It’s Roman, but we use organic flour from Utah and we do a 24- to 48-hour cold ferment.”

Allegedly, his mother dough is more than 120 years old “named ‘Diane,’ because you have to name your mother dough,”Giaramita laughs.

Giaramita’s parents’ 50th anniversary of their flagship happened on the same day as Giaramita’s soft opening in March 2015 with the grand opening that April.

“We started with an electric deck oven and that actually gave us the liberty to play around and experiment with different temps, dough recipes and toppings,”Giaramita says.

He had to have an additional hood built over his oven’s original hood due to local regulations –– costing nearly three times the price of the oven itself.

“It’s not like people were pushed out and new stuff was built,”Giaramita says. “These buildings were empty.”

As Bakery Square grew, so too did the neighborhood. “I started right as that started to take off because I knew there were 400 apartments within a couple of blocks and people were going to be moving in … I was looking more long-term. I like the location because all of my suppliers are right down the road. The university is right up the hill” and the demographics are slightly higher than the average pizzerias.

“When I opened this place up, I did it not to make a fortune,”Giaramita says. “I wanted to support myself, (but) there were a lot of people who were doing a lot of good things to kind of build this area up, so we made the commitment. We had few employees, but we paid them better, and every time our business did better, we gave them raises.”

They’re open six days a week (closed on Sundays –– “Italian family,”Giaramita shrugs). “My parents still own their pizzeria, so the only time I could see them was on Sunday.”

La Tavola, still a Pittsburgh institution in nearby Mt. Washington, isn’t considered competition because most residents stick to their own neighborhoods (and jokingly refer to how many bridges it takes to get to a location as an indicator of distance).

“My dad always told me I could take over the restaurant or become a doctor or a lawyer,”Giaramita says. “I wasn’t going to take over the restaurant, so I was always drawn to politics and international affairs so I did that. I went to the University of Pittsburgh for law school.” He worked for a solid law firm for seven years “and then one day I hit the snooze button like 14 times, and I realized I didn’t want to go in and answer derogitories any more.”

It was tossed around that Giaramita would take over La Tavola –– he even worked in-house for a while –– but Giaramita and his father are both stubborn but proud. His father says the pizza Giaramita made at age seven was still the best he’s ever eaten, “and I’m like ‘I haven’t made a better pizza in 30 years?’” Giaramita laughs.

“My parents said you can take over for three months,” he adds. “You can do anything you want.”

So did he do that?

“I did,” he says, “and it lasted a week.” The kicker? Giaramita changed the pizza boxes and after four days his father changed them back. It seems running his own pizzeria might be a better idea.

“I thought I might have a leg up having restaurateur parents –– and it still may be –– but opening this restaurant was still the hardest thing I’ve ever done. Even harder than the bar exam.”

At the heart of Pizza Taglio is the food. “We lucked out in that we were well received,” Giaramita says. “I think there’s always a demand for something that’s novel or something that’s really, really good. I don’t know where we fit in there. I know that we’re lucky to have other pizzerias around here that are amazing, so maybe it was dumb for me to open up here. I think the reason we did well early –– and I don’t want to sound too Italian –– is that this was something different. I don’t want to say better than other people were doing, but it was different. Our menu started with 16 pizzas. We now have six.”

The menu changes with the seasons and what he can source locally. Fresh produce takes starring positions on the makeline, which means a lot to the customers. “The one thing they notice is we’re not trying to be perfect, but what we are is a committed small group. When I opened, there was a period where I backed off and let (employees) do stuff. I’d much rather take a good person and make them into a good pizza maker than take a good pizza maker and turn them into somebody I want to be in business with.”

Giaramita’s current pizzaiolo started as a dishwasher and worked his way into the pizza-making position. “Opening up takes a lot,” Giaramita says. “Staffing –– I lucked out. Everyone is invested. Everyone cares.”