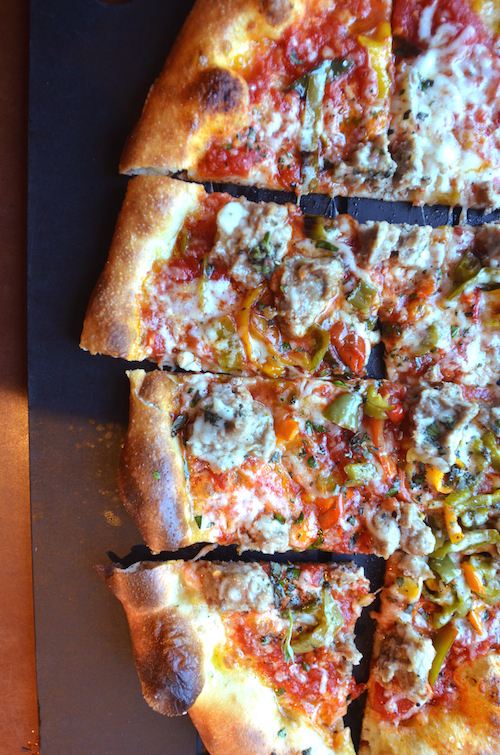 What’s in a name? To some, namely, everything. And that’s clearly the case at the aptly titled Serious Pie in Seattle, where the chefs and bakers under the tutelage of the famed Tom Douglas practice their craft with the goal of perfection in mind.
When Serious Pie opened on Seattle’s Virginia Street in 2006, it made a lot of noise thanks to Douglas’ esteemed profile.

The James Beard Award winner was said to have created a “pizzeria with a bread baker’s soul.” And we quickly saw why Douglas, who was not present when we visited Serious Pie, felt like that phrase would be a fitting description of his ‘za. There is no question the crust is the unmistakably defining characteristic that drives customer Mike Stout into the restaurant.

“The base of any good pizza, to me, is the crust,” Stout says between bites as we chat briefly inside the Serious Pie & Biscuit location (more on that later). “This here, best pizza crust in the city. In the world.”

We asked Liesa Freund, manager of the Serious Pie restaurant on Pike Street (which is inside the impressive Starbucks Reserve Roastery & Tasting Room), what sort of feedback she gets on the crust.

“That is something most of our customers seem to pick up on right away — the attention we give to it here,” she says. “We get a lot of comments on it. It’s pretty unique.”

In order to optimize the flavor of the yeast and produce a great bread that stands alone, the dough at Serious Pie undergoes a long, cold proofing process. The result? A thick edge that blisters and crisps on the exterior but yields a bready interior that is light and aromatic.

The menu at Serious Pie is short and to the point: a few starters, pizza and desserts.

Starters include a salad of marinated lacinto kale, calabrian chilies and pine nuts or wood-oven padron peppers with bottargo aioli and river salt. The sweets range from a root beer float to milk chocolate mousse with praline rice crispy and salted caramel. But Freund says one dessert tends to stand out above all others: Tom Douglas’ signature coconut cream pie.

“It really is that good,” she says. “There are people who say they could eat it every single day, and I know I could.”

As for the pizza, Freund says Serious Pie cooks with Applewood and that the sweet fennel sausage, roasted peppers and provolone pizza (pictured at the left) is a heavy customer favorite. Another interesting one features Yukon Gold Potatoes, rosemary and Pecorino Romano cheese.

Then, of course, there’s the biscuit bar. The Westlake location, known as Serious Pie & Biscuit, makes southern-style, buttery biscuits that are available until 3 p.m.

“We wanted to do something different there,” says Freund. “It has gone over really well. It was a great way to use the space and put a different twist on things.”

The large biscuits are available in a variety of ways, explains Freund.

“There’s a breakfast biscuit with ham and egg that’s really good,” she says. “Some people get them with the seasonal jams and eat them like that.” Then there’s Freund’s personal favorite, a filling beast of a biscuit named “The Zach.”
“It has fried chicken, an egg, bacon and gravy on it,” she says. “There’s a lot to it. You won’t be hungry when you finish one, that’s for sure!”

The aforementioned location on Pike Street, which Freund helps manage, is a showpiece within a showpiece.
Starbucks opened its Reserve Roastery & Tasting Room in the Capitol Hill area last December to much fanfare. Housed only nine blocks from the company’s original location, the facility is part tourist attraction, part artisan coffee heaven. The 15,000-square foot facility represents “the fulfillment of a decade-long dream,” Starbucks founder Howard Schultz said when the Roastery opened. He later referred to the location as a modern, real-life “Willy Wonka” experience for visitors. It is no wonder Douglas did not think twice about accepting Schultz’s invite to house a Serious Pie within the Roastery’s confines.

“When Starbucks called and asked our company to be a part of this, that was a very exciting development,” says Freund. “This is a really beautiful building with a lot to offer. It’s such an impressive concept. We don’t only make food here in the Serious Pie, but we also make the pastries and sandwiches that Starbucks sells in its Roastery Café up at the coffee bar.”

Freund says the location gets more out of town visitors than the other two Serious Pies, but that doesn’t make the service or attention to detail any different.

“People come in here with really high expectations,” she explains. “They come in for the coffee experience and to see and smell and taste what the Roastery has to offer. Then they discover there’s an actual restaurant in here and are eager to see what we have to offer, too. And, of course, there are locals who work in the area that know about us and walk in for lunch. Even though Starbucks is a little bigger than us and has more money than us, it has been a really nice pairing.”