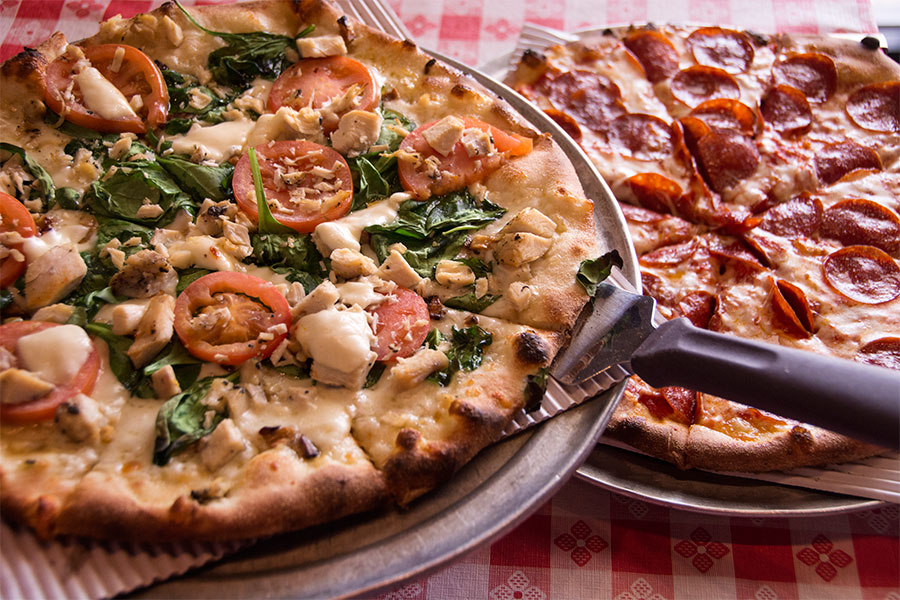 Tim Kolenda didn’t start his Lexington, Kentucky, pizzeria on a whim. After spending his formative years working for a pizza franchise, Kolenda tired of corporate policies and a half-hearted product. Simply put, he thought he could do better.

In February 2012, with the backing of his father Mike, Kolenda opened Brick Oven Pizzeria. Today, his staff of 14 part-time “weekend warriors” man the successful pizzeria, and Kolenda and his wife Dana are nearly always on-hand to greet customers and make pizzas.

When choosing his own location, Kolenda looked heavily at regional demographics and settled in what is considered one of the highest grossing communities in the state. Initially planning a take-and-bake concept, they decided against carryout pizza because they’d be competing with those easily (and inexpensively) found in grocery stores.

One of the focal points for Brick Oven Pizzeria is its rotating stone oven. With a 53-inch mouth, the stone oven bakes at 600-plus degrees at just around four minutes a bake. Kolenda’s father Mike found the oven, spent time with its creator and found the oven to be a superior product to more traditional deck ovens. And rather than purchasing expensive new equipment, Kolenda and his father found a closed pizzeria in Alabama and were able to source many pieces more affordably, and in great shape.

When formulating his pizza dough, Kolenda knew he needed something different to compete with the other chains and independents established in Lexington. He tried nearly two-dozen different flours and changed one ingredient at a time one batch at a time before finding the perfect formula with a shelf life of two to four days. “The dough that we make today we won’t even use until at least tomorrow,” he says. Shelf life was important because he wanted to reduce waste, and that is important for a single pizzeria lacking the buying power of a chain.

“Three years ago, I wasn’t nearly as ‘buy local’ as I am now,” Kolenda says. “If I go to a restaurant, I … try to support that local group. That’s what I am.”

Other specialty pizzas include a popular Chicken Bacon Ranch and a Hot Brown pizza, which is Brick Oven’s version of a Kentucky dish they make with Alfredo sauce, ham, turkey, bacon, tomatoes and cheddar cheese.

The restaurant offers only beer due to local laws pertaining to the number of seats and doors in an establishment, but alcohol accounts for just two percent of sales. A whopping 75 percent of sales is pizza-based.

Kolenda says he tries to make as much as possible in house, including pork sausage (and a fantastic spicy version) and chicken he cooks in a pressure cooker he sourced at auction.

Making so much in house is labor intensive, and Kolenda admits he and his wife work long hours, with one or the other usually in the store.

“It’s not about the product as much as it is the customer,” Kolenda says. “Talking to the customers and knowing the customers, and them knowing you –– it’s that bond.”

Kolenda started a loyalty program that has become an important tool in encouraging repeat business, but he also created a television commercial that he says increased his sales more than 20 to 25 percent “almost overnight. We started that commercial the second week of January.” He has tried direct mail, but pays a secondary party to handle Brick Oven’s social media for more consistent coverage and feedback that can be tracked.

Kolenda and his father are working on standardizing their systems in anticipation of perhaps opening a second store. After spending years in the franchise world, Kolenda operates his business much the same. He carefully watches his product freshness, appropriately labels everything, reduces waste and keeps his menu small enough to be manageable while still offering his guests plenty of choices. He still measures ingredients and is training his staff to do the same. Once systems are in place, Brick Oven Pizzeria will indeed be ready to grow.

Like a lot of independent operators, “I guess I’ve got my hands so wrapped up in it that it’s hard to let go,” Kolenda admits. “It’s hard to find somebody to turn that over to. For them, it’s a job. For me, it’s a career.”