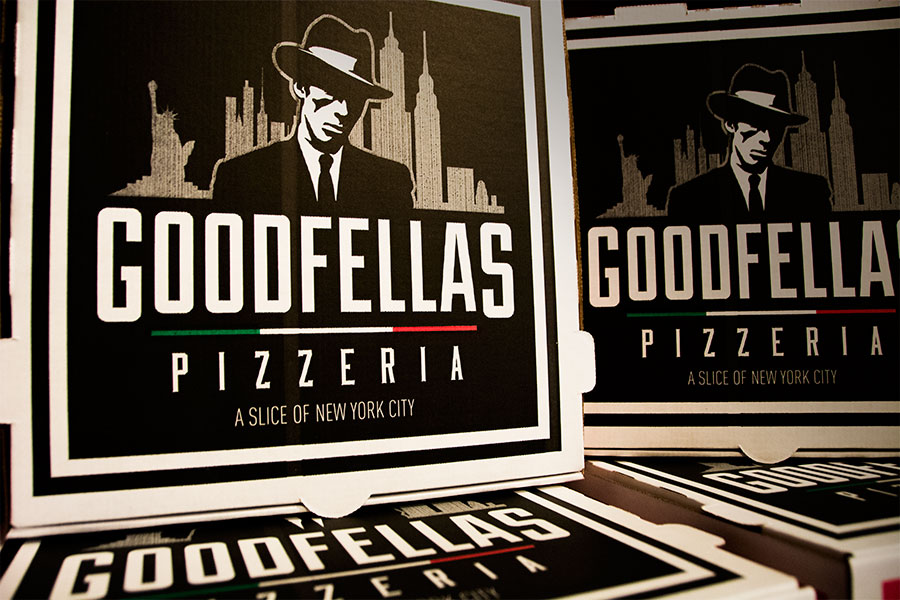 There’s a reason Alex Coats and Eric Boggs wanted us to meet at their pizzeria’s original location more than an hour before opening. Just minutes after Goodfellas’ OPEN sign lit, we were dancing around customer after customer in the 950-square-foot pizzeria, and the line eventually stretched out the door of the Lexington, Kentucky, restaurant.

“We drove all the way from Wilmore for this,” one customer could be overheard saying of his more than 30-minute commute to visit Goodfellas on a weekday morning. He rubbed his hands together in anticipation as he picked out an oversized slice and what may be the largest breadstick we’ve ever seen. Paired with the drink, the incredibly popular lunch special is part of what makes the tiny restaurant so popular. With four stores of varying concepts, Goodfellas ranks No. 62 on Pizza Today’s Hot 100 list with sales of nearly $4 million last year.

Coats and Boggs were high school buddies in their mid-20s when they started their pizzeria concept in 2006. After a late night hanging out at a local bar, “we noticed a lack of late-night food downtown and I looked at Boggs and said, ‘You know, we need to do a great pizza-by-the-slice concept,’” Coats says. “My family’s from Long Island, New York, and I remember real New York pizza, but never had any down here in Lexington.”

With Boggs’ culinary background and the help of a friend who worked in a local pizzeria, they formulated a traditional, chewy New York pizza dough. “I don’t know how many recipes we went thought until we found it,” Coats says.

Indeed, slices are the company’s main game. “We target the entertainment districts,” Boggs says. “That’s what we look for –– people who are out having a good time. Late-night traffic. Lots of activity, lots of foot traffic. That worked out well down here (at the company’s tiny original location) because we’re close to businesses –– bankers, attorneys, etc. –– down here for lunch and then we get people out at night.”

Pizza accounts for 75 percent of sales, with slices the greatest majority. Pizzas are made and baked in front of customers and they continuously refresh their slice cases.

The company shreds its own cheese at the Cincinnati location and makes its own dough –– which usually proofs overnight –– at each of its four locations. Sausage is cooked off locally –– even the garlic is roasted in-house. They bake their pizzas in deck ovens with a two-inch-thick stone “to give it that New York authentic bake,” Coats says. “You see your pizza being made. Kids love it, too.”

The Goodfellas menu is purposefully simple, with a few sides, subs and salads, the industry’s most popular toppings (though some out-of-the-box toppings like broccoli, roasted red peppers and ricotta are available) and desserts made in-house. Pizza simply takes center stage. “We’re going to do one thing and we’re going to do it really well,” Boggs says. “The menu hasn’t really changed except for some specialty pies in the last 10 years. It’s the same recipe, the same products.”

Popular specialty items include the “Tommy Two Times” –– a double pepperoni pizza ($22.95 for a large) –– and a Taste of Naples, a traditional Margherita pie, priced at $25.95 for a large.

The company’s slice lunch special –– any slice, an oversized breadstick, salad or dessert and a drink for just $6 –– is “crazy popular.” Indeed, during our visit there was a line out the door at the company’s Spring Street location well before noon.

“We’ve run a full-price menu since the beginning,” Coats says. “We never run coupons and we don’t discount.”

“We mark it at what it’s worth,” Boggs adds.

Delivery is only available at one location, and that’s done reluctantly. “We just feel we lose the quality, plus you lose the Goodfellas (experience). When you come in, we have a good time. Our customers love us,” Coats says. “I think that’s what’s made us successful –– actually listening to the customer and providing top-quality products no matter what. That’s what we look for. If we can find a better product, we’re going to us it.”

It took Boggs and Coats five years to open their second location on the nearby campus of the University of Kentucky. Why the lengthy pause? Coats and Boggs say they wanted to build up their client base and some capital and encourage word-of-mouth publicity before making a big move. Although their second location is just a few blocks away, they don’t cannibalize their own clientele. “There’s different demographics there,” Boggs says.

In 2012, Boggs and Coats ventured a little farther north to the Cincinnati suburb of Covington, Kentucky, but this time they added an adventurous bar in what could only be described as a “speakeasy.” That store offers 400-plus bourbons and a complex craft cocktail menu that helps set Goodfellas apart in that area. “We’re talking infused ice –– we’re talking chili pepper and watermelon infused so that as the ice melts, the drink changes and evolves the cocktail –– and a lot of pre-Prohibition style cocktails,” Coats says.

In 2014, Goodfellas’ fourth location opened in downtown Cincinnati and has become the company’s top producer. All four utilize a quick-service concept, even in the locations with full bars. “Our concept, it’s different to a new market but (customers) really learn it and they like it,” Coats adds.

One of Goodfellas’ main philosophies is its commitment to the local community. Even the company’s name and logo was decided by local contests. “We love being in our restaurants,” Coats says. “We love plugging in locally. … Some people do articles on us, and they call us a ‘chain.’ We were crushed. We’re like, ‘We’re not a chain!’” The pair sits on a number of local boards and groups in their respective communities.

“A lot of people ask us for donations, but we like showing up at their events. We like feeding all those people,” Coats says. “That’s our contribution to helping a good cause.”

Heavy Goodfellas theming can be found throughout the company, from signature pizza boxes to t-shirts. All their cups are branded plastic containers, and Coats and Boggs love the idea of the tumblers sticking around customers’ cabinets and desks. “We’ve got so many Instagram posts and Facebook posts where kids are fighting over the only Goodfellas cups in the house,” Coats says.

Even better advertising? They pump the heat from the oven right out onto the street, so the whole block smells like –– what else? –– pizza. It’s a mouth-watering move that gives Goodfellas a leg up on the competition.

Despite their emphasis on local community, Boggs and Coats still see potential for regional growth. They’re currently scouting locations within a three-hour drive of Lexington, including a deal in Knoxville, Tennessee, and another store in Lexington. “We want to go where there’s a void, and we’ve got our eyeballs on a couple of spots,” Coats says.

All four stores are company owned, and that’s how they plan to keep the model. “We get contacted by a lot of people who want to franchise, but I don’t think we’re ready to lose that home-grown feel,” Coats says. “We love going into the restaurants and talking to our customers.”

Despite opening restaurants close together in Lexington, Coats and Boggs don’t worry about cannibalizing their own business. They like smaller spaces because the restaurants always look full and create an energetic atmosphere.

“Our numbers, they’re still increasing,” Coats says. “We find where people are having fun and we put a shop there. It’s a pretty simple concept. It’s just finding the right location and being patient. We don’t want to just go into a place and sign a lease unless we know it’s a home run. We love home runs.”