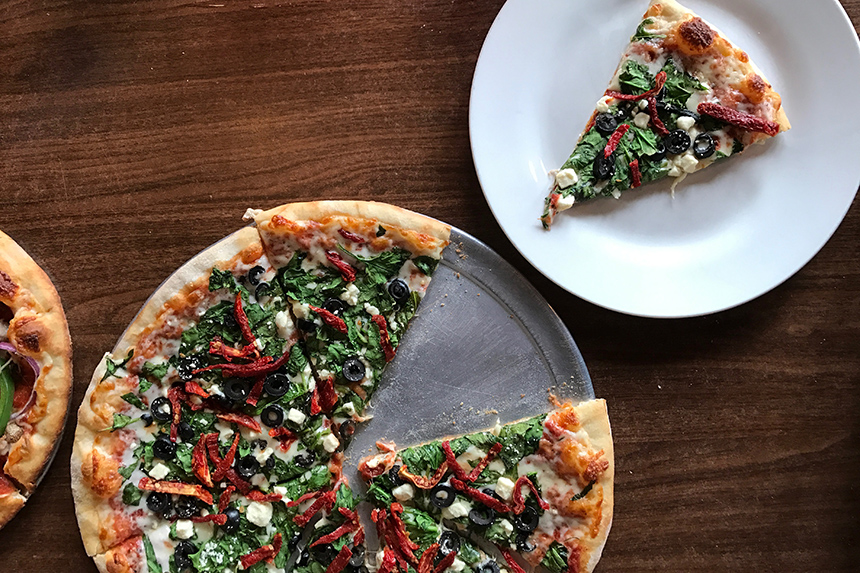 Meet Jon and Chacha Lyle. They moved to Savannah, Georgia, from Santa Rosa, California, to capitalize on the affordable cost of living and opportunities in the Low Country. The Lyles didn’t intend to open a pizzeria when they envisioned their cross-country journey. But when Jon found an existing pizzeria available in the corner of a commercial center with a nice patio, the couple took the chance.

Instead of rolling with the prior pizzeria’s concept, the Lyles sought to bring the artisan pizza they were accustomed to in northern California. Riverboat Pizza Company opened in 2013 with an emphasis on thin-crust pizza with creative and fresh toppings.

While Jon and Chacha have worked in the restaurant industry, this was their first endeavor into ownership. The restaurant equipment, including deck ovens, refrigeration and all of the vital kitchenware came with the purchase.

Jon says the first year was rough. But nearly four years in, Riverboat has found its rhythm. The Lyles have controlled costs where they can, invested in marketing and constantly worked to grow their business.

Away from the hustle and bustle of the tourism-rich downtown

Savannah corridor, Riverboat is situated in a mix of commercial and residential communities. “(Downtown) seems like it’s really dependent on SCAD (Savannah College of Art and Design),” Jon says. “When SCAD is out, it gets a little quieter down there. I kind of like it here even though it is not as busy as downtown, it’s consistent, which is a nice feeling to have in a restaurant.”

Being hidden from the main thoroughfare behind an auto retailer hasn’t stopped Riverboat from becoming a mainstay in Savannah. “If the food is good, they are going to find it,” Jon says.

When Pizza Today visited Riverboat one February afternoon, Chacha was handling the front of house while Jon was in the kitchen making pies. It’s a common dynamic in the shop on weekdays between 11:30 a.m. and 3 p.m. The couple handles the lunch business, freeing up their staff hours for the busy nights.

Saving on labor costs, the Lyles opted for counter service and to close the shop during the slowest period from 3 p.m. to 5 p.m.

With a crew of eight to nine employees, the Lyles spend much of their time in the pizzeria, which Jon says they enjoy.

The Lyles’ commitment to a positive work environment is a vital component to the logistics of managing a small crew. “We do try to find ways to make them happy,” Jon says. “I need them more than they need me. We try to create a work environment that is laid back — but they still get their work done. We all have a good time back here, but at the same time, we get work done.”

Fewer employees mean more hours for Riverboat’s dedicated staff, Jon says. “The employees we do have we typically ask a lot out of them,” he says of the fast-paced pizzeria environment. “People want hours and they want money. As long as they work hard, I don’t have to hire someone else. This is not everyone’s dream job. This is our lives but it’s not theirs.”

The California style allows Riverboat’s kitchen crew to get creative. Each employee receives a personal pizza during their shift, and it’s a source of inventive flavor combinations that have turned into specials.

The Lyles incorporate their own style into their pizza. Dough is made fresh in smaller batches, which Jon says helps with the humidity during the mixing and balling process. Riverboat uses sliced mozzarella instead of shredded. Purchasing mozzarella by the block saves money but adds labor costs, Jon says. The result is a consistent finished pizza. Its house pizza sauces incorporates a garlic and red wine reduction. The Lyles grow fresh basil and other produce on Riverboat’s patio.

Riverboat is a refreshing find for Southerners who are used to thick and meaty pies. Many of Riverboat’s thin-crust pies feature fresh vegetables and unique bases. The Pesto Manifesto has a pesto base and is topped with chicken, mushroom, bacon, artichoke and green onion. The colorful Farmer’s Market features feta cheese, spinach, olives, sun-dried tomatoes and basil.

Jon has been surprised by the popularity of Riverboat’s not-so-ordinary ingredients like artichokes, sun-dried tomatoes and linguica. The popular Riverboat Captain pairs artichokes and garlic with pepperoni and Italian sausage.

The Lyles have developed menu items that are usable across the menu. They created a flavorful Thai peanut sauce for the Bangkok Nights pizza that pairs the sauce with chicken, onion and cilantro. The Thai sauce is also tossed with its wings and served with a jalapeño jelly dipping sauce (PB&J Wings).

Riverboats’ menu has been refined since its opening. Jon added an eight-inch personal pizza to accompany Riverboat’s 14- and 18-inch options. It was a move that has paid off. “Money wise it is a really good thing,” he says. “But time wise, it does become extra work.

“We’ve simplified the menu a lot,” Jon says. “We used to do pasta. We used to do sandwiches. We found that 95 percent of the people seem to be ordering pizza anyway, so let’s just go ahead and do what we do best.”

The Lyles were strategic to keep items that they’ve become known for, like chicken wings and loaded fries (including the Bacon Cheese Fries and the Low Country Gravy Fries). Riverboat has become a destination for some of the region’s best house-made cheesecake. During Pizza Today’s visit, the pizzeria served three cheesecakes: a pecan pie, lavender and plain. The cheesecake is so popular, Jon says, “I’ve thought about doing a spinoff restaurant, instead of pizza do a Riverboat Cheesecake Company.”

Testing and analyzing its menu, marketing and programs has been vital to the business, according to Jon.  The Lyles institute new programs constantly to see what works in the Savannah market. While its delivery program initiated during the pizzeria’s launch became too cumbersome, other programs have reaped rewarding dividends, like the small, but active craft beer program. Riverboat has six taps that rotate often, popular with beer fans. The beer program is a great accompaniment to live music that the pizzeria hosts on its patio.

Marketing is also an area where Jon tests different mediums. “For me it’s more about logo recognition — the more places and avenue that hear our name,” he says. “We do the road signs, the newspaper, we’ve done radio, we’ve done social media. We’ve virtually done about every format.”

The Lyles plan to continue to focus on examining Riverboat’s success and experimenting to grow the concept. “My thinking is to get this place to where there is a line out the door every night.”