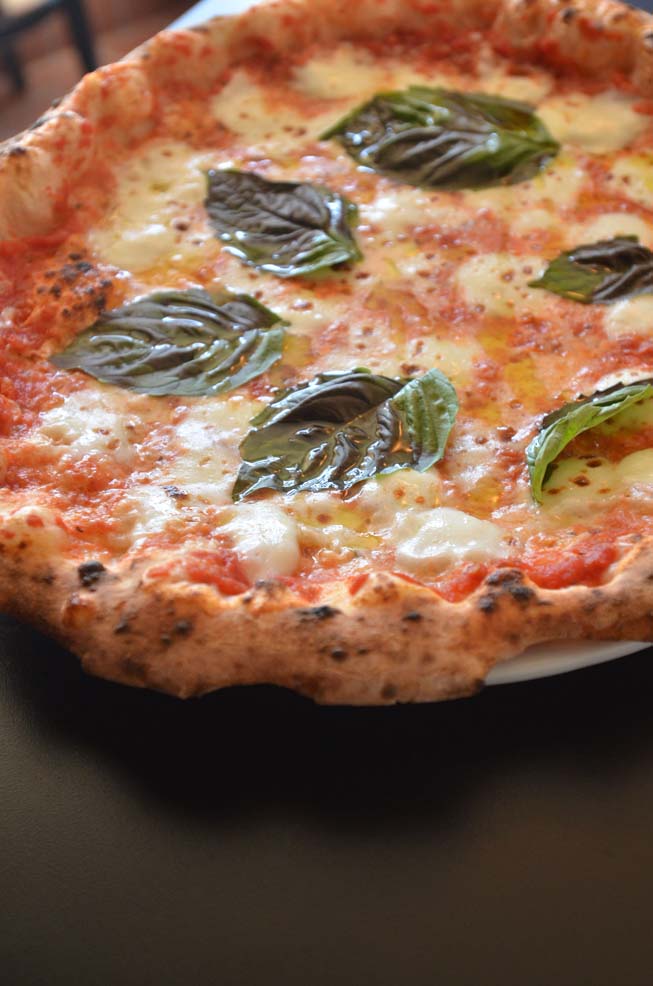 Peter Lutz grew up in Detroit and still has an affinity for the style of pizza his home city has popularized. He likes New York-style pizza and other varieties as well. Pizza comes in many styles, and Lutz isn’t one of those snobs who thinks his preferred style is the only kind of pizza worth eating. Having said that, there’s only one pizza that he has ever fallen in love with so deeply that it became an obsession-turned-profession. And that, as seen in the photograph to the right, is the quintessential Neapolitan.

“It’s light and airy,” explains Lutz, “but still satisfying. The proportions of the flavors are just right. No one topping or flavor overwhelms things. It’s balanced and fresh.”

So fresh, in fact, that Lutz doesn’t even need a freezer at Pizzeria Bruno Napoletano, which he opened in San Diego’s University Heights neighborhood.

“Everything is fresh,” he says. “That’s important to me. You can taste a major difference.”

While Lutz imports some ingredients from Italy, he purchases locally whenever possible.

“We definitely buy what we can locally, especially produce,” he says. “It’s important to support local producers and, again, it’s fresher. We get some of our cheese from Wisconsin and some of our meats from the midwest. And, of course, we also get some of our stuff from Italy. But in those cases, there’s a noticeable difference and it’s necessary. The pizza wouldn’t be the same without it. But if we can get something locally, we do.”

Lutz is a bit of a stickler when it comes to working his wood-fired oven. He had the unit custom made and assembled in Naples. It was shipped to San Diego by way of the Panama Canal and it’s rare to see anyone else fanning the flames.

“These ovens aren’t easy,” says Lutz. “They can be temperamental. They take constant attention. They aren’t for everyone. There’s a reason the major pizza chains cook with conveyor ovens.

“You’re always learning when you cook with a wood-fired oven. It changes. The oven temp changes. The stone temperature changes. You have to move pizzas around to the right spots at just the right time.”

Still, a good apprentice can learn the trade, right? Perhaps so. But for Lutz, working his oven is a labor of love.

“It’s hard to train someone to do it the right way, the way you need it to be done,” he explains. “And then you have to trust that it will be done the right way every time. It’s easy to ruin a pizza if you aren’t watchful, and your customers don’t want to wait while you try a second or third time to get it right.”

For lutz, like many of the best pizza makers, getting it right starts before the oven is ever kindled. A proponent of fresh yeast, Lutz has been feeding his starter for years. Again, it’s about treating the pizza as an art.

Clearly a man who respects his craft, Lutz honors his ingredients artfully with a simple menu that covers the bases without overwhelming the customer with endless choices. Four small plates comprise the list of starters, for example. Customers can choose from a meat and cheese plate with bread ($18), spiedini ($10), mixed olives ($6) and bruschetta ($8). Five salads range in price from $8-$13. During the summer months, a salad of fresh burrata, heirloom tomatoes, basil and extra-virgin olive oil is popular.

But the calling card, naturally, is the pizza. “It’s the reason I’m here,” says Lutz. “When you are passionate about a product you come to appreciate its history and what makes it unique. And then you want to share that with everyone else.”

“It’s about balance, letting each ingredient speak for itself,” says Lutz. “You don’t overdo it. This isn’t a style of pizza where you pile on as many crazy toppings as you can to weigh it down.”

As one might expect, Bruno doesn’t offer an extensive list of toppings. But the lineup nonetheless offers a variety of tastes and textures. The 16 toppings include pancetta and prosciutto as well as arugala, anchovies and Gaeta olives. The offerings are true to the style of the pizza. And they are well complemented by the somewhat extensive wine list at Bruno.

“Wine is an important component to our sales here,” says Lutz. “It’s an integral part of the Italian culture, so I wanted to make sure that we gave it the attention it deserves. Not to mention that it really enhances the meal and the overall dining experience.”

Pizzeria Bruno carries both domestic and Italian wines, as well as a few from South America (Argentina and Chile) and New Zealand. But, for the most part, the offerings hail from Italy. Lutz meets with his wine distributors regularly to learn about what’s hot and to stay educated on the
nuances of the varietals he offers. In fact, he sampled a handful of new wines during our visit to Bruno. Education, he says, is paramount.

“We’re in a neighborhood and an area in general where people are wine-savvy,” says Lutz. “They expect you to stay up-to-date. What I try to do is to stay true to the character of the pizza and the ingredients that I’m using, but at the same time make sure that what I’m offering is new enough to be exciting.”

Aside from the wine (Bruno offered six whites and 15 reds at the time of our visit), the pizzeria also menus beer, sparkling water,  Italian sodas and American soda.

“You have to keep it reasonably priced with the wine and the beer,” says Lutz. “But with the beverages overall, I’m looking to appeal to a wide spectrum without deviating what fits in with the food.”