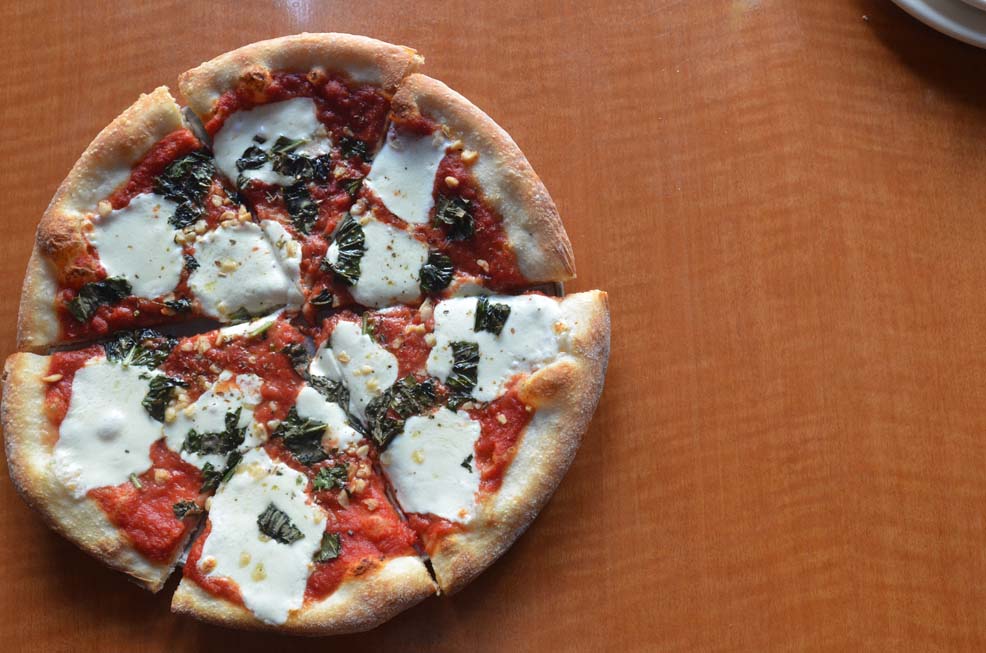 Precinct Pizza — One of Tampa’s Finest

Precinct Pizza — One of Tampa’s Finest

There’s a stretch of development on Tampa’s coastline that can only be described as “killer.” Tucked neatly between the cruise ship port and a major sports stadium sits Precinct Pizza. The eight-year-old pizzeria has found the “sweet spot” of the city, and the results are staggering. Sales sit at $1.8 million with just one location and plans to begin franchising by year’s end. Read on to find out what makes this independent so successful in a market saturated with big chains.

Owner Rick Drury got his start in the industry in 1988 as a delivery driver for Domino’s Pizza. He worked his way through the ranks, becoming a supervisor first and then a trainer before opening his own franchise in 1995 in a small town in New York. Within five years, he had a second store, corporate accolades from Domino’s for sales and a “knack for fixing problems,” Drury says. “They would send me in to terrible stores, and depending on what the problem was –– whether it was poor training, poor advertising or poor product quality –– I identified it quickly, fixed the problem and every single store I ever took over always doubled the sales or higher. That’s eventually why (Domino’s) gave me a store very cheaply. They wanted me to turn it around.” In 2000, a little chain called Papa John’s entered his market, and Drury realized competition was about to get fierce. He was offered a sizable sum to sell his stores to another franchisee, so he took the money and decided to go to EMT school with plans to become a doctor. He became an EMT for New York City in August 2001. A month later, he served as a first responder when the World Trade Center collapsed on 9/11. It was a difficult time for Drury and his family, and the aftermath pushed his parents to retire to Florida. Drury and his wife, Jessica, followed and settled in Tampa, which has a large population of retired and relocated New Yorkers. He had difficulty securing work as an EMT in Tampa, so he began looking for the “Times Square” of the area with the idea of opening up his own pizzeria. Surrounded by a dozen condominium communities, the city’s aquarium and a major sports stadium, Precinct Pizza opened in August 2006 and now sits right on the waterfront. It’s an unusual set-up –– the land is actually owned by the government since there is access to the cruise-ship port (all employees have to undergo Homeland Security background checks), but the building is in arrears after its owner, an Irish bank, went bankrupt.

And one by one, the local competition on Channelside fell, leaving Precinct a nearly $2 million force to be reckoned with. (A pizza chain once moved within eyesight of Precinct but lasted just 66 days.) Drury attributes much of his success to location, including proximity to the Tampa Bay Times Forum, home to the Tampa Bay Lightning hockey team. The company has become the “unofficial” pizzeria for the team, and with more than 40 home games a year, the sales add up quickly. “Every single home game is pretty much a sellout,” Drury says. Last year, 40 out of the 41 opposing hockey teams ordered food from Precinct Pizza (what happened, Boston Bruins?), and they’ve catered for a number of A-list acts (including the company’s largest order by none other than singer Taylor Swift –– Drury jokes that her Waldorf Salad was on the house after she dropped nearly $3,000 on food). When Drury first developed his concept, he wanted a more “man cave” theme with pizza, burgers and tacos. “It fell more into the police thing because of my background,” he says. “Our logo has my original shield number from New York.” Tacos fell to the wayside, but the large menu offers a broad appeal for the many different local demographics. Much is made in-house, including dough and sauce. “Everything that we put (on the menu), we basically did the highest quality that we could find first,” Drury says. “We’d worry about how much the ingredients cost later. We’ll make it fit somehow. We’ll make it work.

“In my 22 years in the pizza business, I have found that there’s generally two customers: the customer who doesn’t care what they pay, but they want the highest quality in food and they’ll pay to get it made their way. … That’s my core customer. “Then there’s people who don’t care what they get, but they want it as cheap as possible. That’s not my customer. That’s not who I cater to.” Pizza accounts for 20 percent of sales and is made in a rotating deck oven that sits predominantly behind the counter. The pizza menu includes more than a dozen NYC-titled pies ranging from Da’ Bronx Da’ Works Pie ($22.49 for an 18-inch large), the Midtown Meatlovers Pie ($19.99) and the Arresto Pesto Pie ($16.99). “It’s incredible how certain items definitely outsell others,” Drury says. “The Waldorf Salad ($9.99), we began selling just a few years ago, and that’s now my third bestselling salad.” There are appetizers, pastas, hero sandwiches, rolls, calzones, homemade desserts and even burgers on the menu (think a half-pound of prime rib served on a Kaiser roll). “A friend of mine said: ‘It’s a pizza place. Who’s going to buy a burger?’ ” Drury says. “We sold 3,003 burgers last year. … When we first started (selling) them, I would do maybe one every third day. Then it was one every other day. Then one or two a day. And that average is still going up. It’s incredible.” Delivery is a big component for Precinct, comprising nearly half of sales. “With water behind me, I’ve only got three directions to worry about,” Drury says. “That’s even better for me.” Dine-in makes up 45 percent, but there’s very little carryout because of an extreme lack of parking in the immediate vicinity aside from a pricey parking garage across the street. The city’s fire marshal swept the area and painted the entire street red as a fire lane. Drury admits he would advertise more if he had legitimate parking for the business. “You can never have enough sales,” Drury explains. “I would advertise my delivery business. I haven’t advertised in seven years simply because of the fact that if I were to advertise, No.1: I’m not sure we’d be able to handle it and No. 2: I couldn’t hire enough delivery drivers because there’s nowhere for them to park.”

In fact, Precinct doesn’t advertise much at all other than social media. They’ve got more than 1,500 fans on Facebook alone. The company is now leaning toward franchising, and Drury is working on standardizing operations, right down to the logo on the napkins and merchandise like shot glasses and visors. “It’s funny, but I don’t feel like an independent almost because of the volume that we do,” Drury says, adding that January 2014 was a $202,000 month. With steady money coming in, he can buy shirts for the staff, add 12 new car toppers for the delivery drivers and replace the compressor in the kitchen with little impact on operations. And that, Drury says, is how he knows he’s financially ready to take the next step. “I think the most important thing that a franchisor can do is be able to say ‘no’ to a potential franchisee. … To be able to say ‘No, you’re not cut out for this. You’re not going to be able to keep my brand up the right way,’ ” he says. “This is not a side job. You have to be focused on this. If you’re not passionate about it, quit. It’s a great investment, don’t get me wrong. But I think if you’re not passionate about it, you should look somewhere else.” He hopes to begin franchising agreements by the end of the year, but he and his wife still log plenty of man-hours in the restaurant every day. “I will not do it until I have every I dotted and every T is crossed,” Drury says. “It’s got to be a home run right out of the box. … I would rather have half the stores that I could possibly have and make less money than make more money and sacrifice my brand. I just won’t do it.” Mandy Wolf Detwiler is managing editor at Pizza Today.