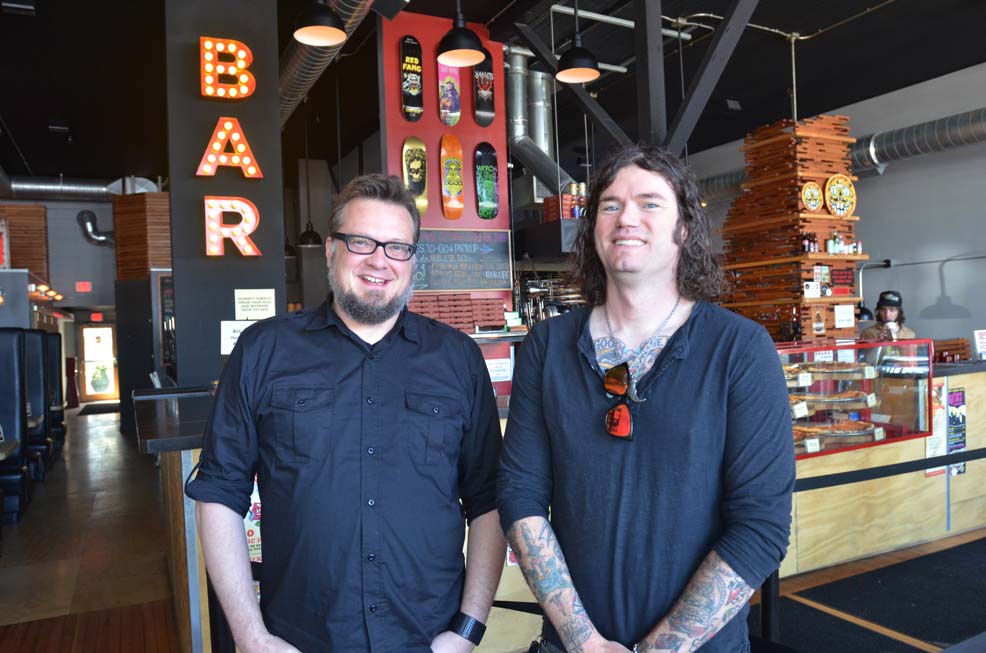 Solid menu and theming keeps Sizzle Pie from burning out

One hears the phrase “this is a foodie town” often. Just search social media for photos of consumers’ culinary exploits and you’re likely to find a number of hits for the city of Portland, Oregon. “Eclectic,” “local” and “cool” are words you’ll see used in descriptions of many of the city’s restaurants, and three-unit Sizzle Pie is no exception. The brainchild of owners Matthew Jacobson and Mikey McKennedy opened just three years ago but is hailed as a favorite for its emphasis on fresh ingredients in a fun, rock-and-roll atmosphere that mirrors the philosophies of its founders. The result is $5 million in sales, so we set out over the summer to find out what made Sizzle Pie so hot.

Like many Portlanders, neither Jacobson nor McKennedy hail from the Northwest, but rather from Minnesota and Texas respectively. They met when Jacobson’s metal band played at the bar McKennedy managed. “We started by Mikey and I talking about the things that we loved, which was pizza and Portland and this neighborhood and all the other pieces that make up Sizzle Pie –– music and art, and we really just set out to combine those things,” Jacobson says.

“I was really excited about contributing to the Portland pizza scene,” McKennedy says. “I don’t want to knock on it, but I felt like there was room for another pizza place in Portland.”

The road to launching Sizzle Pie was not a smooth one, Jacobson admits, including paying 18 months of rent “before we were able to scrape together enough funds to finish all the work. We had to re-finish all the floors and re-do all the plumbing and electric –– basically everything.”

What they didn’t know they quickly learned or found the right people. “We had the drive, we had the energy and we had the vision,” McKennedy says.

Since health licenses are purchased annually and they were going to have to pay a full year’s worth just for two weeks of business, they held off and officially opened at 12 a.m. on January 1, 2011. They used that time to build anticipation. “We’re kind of tied to the music and art communities and (involved in) social media, so we had a lot of people who were kind of anxious to check us out from day one,” Jacobson says.

Six months later, a prized spot opened across from Powell’s Books, one of the city’s biggest draws with a lot of traffic. The spot had already been a pizzeria for more than a decade but was eventually shuttered due to mismanagement. “We hadn’t talked about opening a second location, and we definitely weren’t ready to, but when we saw that sign, we thought ‘When is this ever going to be available again? We’ve got to at least try,’” Jacobson says. “After competing with other different types of businesses and people for that space, the landlord selected us and we signed the lease –– again, without any financing.”

Just a year after launching their brand, McKennedy and Jacobson found themselves operating two successful pizzerias in a town with more than its fair share of competition. “Theoretically, when we bought that space, we thought it was going to be turnkey because it had been a pizza place,” Jacobson says. “A lot of the equipment was there, but the reality was when we got into it, we saw all the (oven) stones needed to be replaced, that the dough mixer was really crappy and (we needed) to spruce this place up a little bit.” That included replacing ceiling tiles, which led to finding live electric behind them and so on –– a larger project than expected, so the second location acquired its own personality from the original, as did the newest location in Eugene, Oregon, which opened in 2013. Why create a cookie-cutter experience when you can get creative?

That’s a theme that spreads throughout Sizzle Pie’s culture. Jacobson says their concept is “East Coast influenced with West Coast sensibility” meaning pizza by the slice is king –– both traditional and non-traditional –– with a heavy walk-in component coupled with the delivery Portlanders expect.

While the concept relies heavily on art and music in its design, they don’t overlook the menu. Dough, sauces and even salad dressings are made in-house. “It was very important to us from the very beginning to have that quality from-scratch approach,” Jacobson says. “It’s in our DNA.”

McKennedy says he spent months designing and testing the initial menu to the point where “there’s only so many times you can get 20 of your closest friends to come over for free pizza,” he laughs. “We were making sometimes up to like 40 a day to test. They don’t come back after day 10 or 11.”

The pizzas are all cleverly named with music and movie references, including top-selling The Ol’ Dirty (salami, ricotta, olive oil and pepperoncini), Ace of Spades (cheese and pepperoni) and The Gold Ring, which features white truffle oil, goat cheese and green onion. (We were hoping to hear someone order the garlic-heavy Napalm Breath or vodka-sauced Good Luck in Jail.) Nine pies with meat, vegan and vegetarian offerings are available by the slice. “We’re first and foremost a slice shop,” Jacobson says.

There are dozens of toppings, cheeses and house-made sauces beyond a traditional red sauce, including a caramelized onion spread, a creamy basil cashew spread and a cilantro pesto. McKennedy’s enthusiasm in the kitchen is evident on the menu, and there’s a heavy emphasis on local ingredients and products, right down to the bar and pizza boxes.

“We have to be conscious of the price points, but we realize that we’re probably just not going to make as much money as other pizza places because of our prep load,” McKennedy says. “We want to keep it fresh and make it in house.”

Though not himself vegan, McKennedy had worked with vegan menus before and had a healthy respect for the lifestyle, so adding that component to the menu was an easy and essential component to Sizzle Pie’s operations. “Portland is a very vegan town,” Jacobson says. “I’d say it’s the most vegan-friendly town that I’ve been to in the country.”

Gluten-free offerings are available but they cannot be completely gluten free. There’s just too much flour in the atmosphere. “It’s really more for the people who prefer the gluten-free diet as a lifestyle,” Jacobson says.

Two of the three locations have full bars (beer sales outweigh liquor) and alcohol makes up 20 percent of sales.

Delivery is relatively new ––they were simply too busy to handle it at first –– but now comprises roughly 15 percent of sales. “That’s growing exponentially every month” just by word of mouth and is handled in one central location, says Director of Operations Bob Peyton. “It was a big, big learning curve to understand exactly how to execute it properly when we started. And we’re still learning. We brought on a supervisor who has years of experience as a delivery driver. He’s been really good to work with to understand how to improve that department.”
Training was critical, but so too was a sophisticated phone system that could handle high call volumes successfully. “If we miss a phone call or (customers) are waiting on hold too long, that’s lost revenue,” Peyton says.

McKennedy and Jacobson made a conscious decision to serve as a late-night destination because when they moved to Portland, there were few choices from which to choose after-hours. They’re open until 3 a.m. during the week and 4 a.m. on the weekends.

There are also two Sizzle Pie concession stands at the city’s indoor sports area, which increases Sizzle Pie’s brand awareness, especially to non-residents. “It is a competitive town,” Jacobson says. “There are so many restaurants and bars. … I feel like we can stand on our own. I feel like we could be next door to any other shop and we’d each have our own identity and focus and specialties.”

After opening their Eugene location –– which is now Sizzle Pie’s highest-volume store thanks to fewer options and less competition –– Jacobson and McKennedy have begun eyeing a larger brand expansion.

“We started with one Sizzle Pie and really had no game plan,” McKennedy says. “We didn’t say, ‘OK, we’re going to have 15 locations up and down the West Coast in 10 years.’ Those conversations happen more now … but it’s now ‘How do you maintain that personal touch?’” With more than 150 employees across the brand, McKennedy says he sometimes has to introduce himself when entering one of the stores, and that level of success is both exciting and disconcerting.

Staying active in their local communities, including grassroots marketing and donating to fund-raising efforts, helps keep Sizzle Pie a viable brand at the community level, and that is a concept they’ll continue no matter what market they enter.

Peyton was brought on board to help organize their systems for future growth, but in the immediate future is the construction of a commercial delivery kitchen with a walk-up pizza window in an area that Jacobson calls a “food desert.” They’re also looking at Seattle as a possibility for growth and are searching for the right location that has a niche for late night and a demographic that understands and appreciates their concept.

“We’re asking ‘Does this feel like the right place for Sizzle Pie?’” Jacobson stresses. “That’s important for us, first and foremost.”