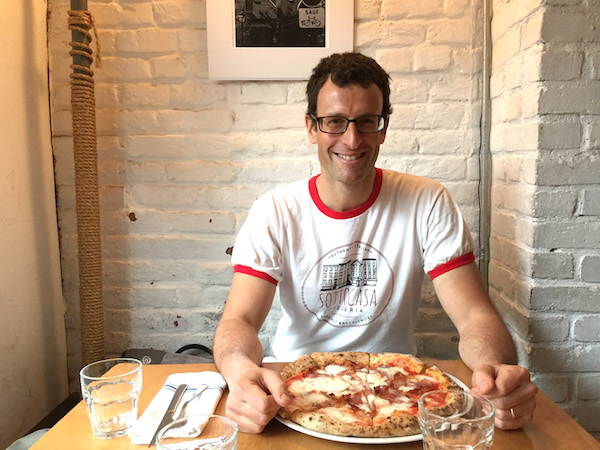 The brownstone has become synonymous with the neighborhoods of Brooklyn, New York. Tucked in the lower level of a brownstone on Atlantic Avenue resides the four-year-old Sottocasa Pizzeria.

First-time pizzeria owner Luca Arrigoni welcomed Pizza Today in the spring for a tour, a meal and conversation. Hailing from Milan, Italy, he came to the U.S. for acting, but after studying under Roberto Caporuscio at Kesté on Bleeker Street for more than a year, Arrigoni knew Neapolitan-style pizza would be his restaurant focus.

Arrigoni is hesitant to use the word Neapolitan. “I’m not Neapolitan, but I am Italian,” he says. “It would be a little weird, especially to my Neapolitan friends, to claim myself as a Neapolitan pizzaiolo. I am a pizzaiolo who makes the best pizza I can — or probably the pizza that I like the most. I would say it’s authentic Italian pizza in New York.”

The restaurant’s name also derives from Italy. “Sottocasa, in Italian, is two words. ‘Sotto’ is under and ‘casa’ is the house,” Arrigoni says. “In Italian, ‘sotto casa’ is around the corner or very convenient. So when you say that we are going to meet at the pizzeria sotto casa, we are going to meet at my closest pizzeria. It worked perfectly because it hit on our idea of being that neighborhood, small, homey.”

Sottocasa is a cozy spot, a few steps down from the hustle and bustle of street level in Brooklyn’s Boerum Hill district with a subtle, painted sign above its entryway. Most of its brick walls have been white washed with visible ceiling beams. Old hardwood floors and a line of tables, mismatched chairs and a long bench border the long, narrow space with a bar and a communal table balancing the opposite side. The space draws your eyes back to its mammoth oven with a story of its own.

Remodeling century-old brownstones come with their fair share of challenges as Arrigoni learned while building out Sottocasa, taking the DIY approach to some elements like the unique light fixtures, cross-stacked wooden benches and bar front. With construction delays and switching general contractors mid-project, constructing the restaurant from scratch took about six months.

Reports of its “flying” two-ton wood-fired oven, built and shipped from Naples, have swept through the borough. The floors were too weak to handle rolling the pizza oven in through the front of the restaurant. And complications with maneuvering the oven from the back with a crane eliminated that option. But then the crane company came to the rescue with an even larger crane that was schedule to move a 747 jet later that day at JFK airport. The crane lifted the pizza oven over the three-story building and into place behind the building, since the oven was still too heavy to stand on the floors. Arrigoni had a room built to encase the oven and flow right into the interior. “And that is why the oven is going to stay there forever,” he says.

Beyond the oven chamber is a quaint outdoor space, a rarity in Brooklyn. The added seating is an asset on its often-busy nights.

Opened in September 2011, Arrigoni says business was slow at first. But as Sottocasa, its staff and Arrigoni became fixtures in the neighborhood, the restaurant began to blossom. With dinner services seven days a week and weekend extended hours (opening at noon), Sottocasa generated about $1 million last year.

“The customer base is definitely neighborhood center. I wouldn’t be surprised if it’s 75 to 80 percent,” he says, adding that families dominate early evening. It is an intimate date night destination later.

“We don’t get that many tourists,” he says. “This neighborhood is young, family, upper middle class. There are a lot of different nationalities. We personally know a lot of our customers by name.”

Sottocasa has a very focused menu of antipasti, wood-fired pizzas, a calzone, select desserts, beer and wine with few deviations or rotation. In fact, Arrigoni says, his only new addition so far this year has been a gluten-free pizza. “We freeze it and every night we take out some,” he says. “It is a service that people are asking for.”

But, Arrigoni warns, “this is furthest we go for different stuff. We’re never going to have Vegan cheese or stuff like that.”

In the beginning, he admits he rotated the menu. “I was adding here and there with every season and I’m just not that guy,” he says. “I don’t go to the farmer’s market, sorry. So I have the staples. I like the idea for people to come here and get the staples. I feel comfortable doing this. It is really authentic, traditional, very
basic Italian.”

Arrigoni says Sottocasa uses the highest-quality ingredients, whether
imported from Italy or grown regionally. “I try to use common sense. It doesn’t make any sense to get mozzarella from Italy. I’m super happy with the mozzarella we have. We use fior di latte. We get Italian tomatoes. We get cold cuts from Italy. Of course, all of the fresh stuff comes from here.”

Beer and wine accounts for 20 percent of Sottocasa’s total sales. And the lists are exclusively Italian. Though Italian beers can be expensive, Arrigoni is happy with the restaurant’s selection of all-Italian
microbrews.

Carryout and delivery separates Sottocasa from its Neapolitan competitors. Between 15 to 20 percent of its business comes from carryout and delivery. Of that, two-thirds is from delivery. “We have one guy who delivers by bike,” Arrigoni says. “We have a kind of small delivery area. We try to do one delivery at a time, so we try to get the pizza there as fast as we can.”

Arrigoni acknowledges that delivering a delicate Neapolitan-style pizza can be challenging, but “for my perspective, I would be crazy not to do it.” He says he thinks people understand that it is different when it’s straight from the oven to the table, but Sottocasa hasn’t experienced delivery problems.

With planning in place to expand the Sottocasa brand, Arrigoni doesn’t consider himself a restaurateur. “Those guys have passion, but they could spend their whole lives seven days a week at a restaurant,” he says. “I can’t do that. I have way too many other things to do.” Arrigoni, an avid skier, strives for work/life balance.

Sottocasa’s 16 well-trained employees have proven invaluable. He has six highly skilled pizzaiolos able to handle make and oven duties. He also has great respect for his front-of-house staff.

Arrigoni has developed operational procedures for growth. “I have a very structured process of everything –– dough making, storing, etc,” he says. “I’m trying to get it as easy as possible and as systematic as possible.”

He has hopes to expand beyond the metropolis. “Here in New York, we’re all fighting in this huge cage. And the standard is now getting way too high, so it’s really hard to be a big fish in this kind of tank,” he says. “So I envision us — and we are a very small neighborhood restaurant, that’s what we want to be — and my idea is that there are plenty of neighborhoods in the country that can enjoy very good pizza.”