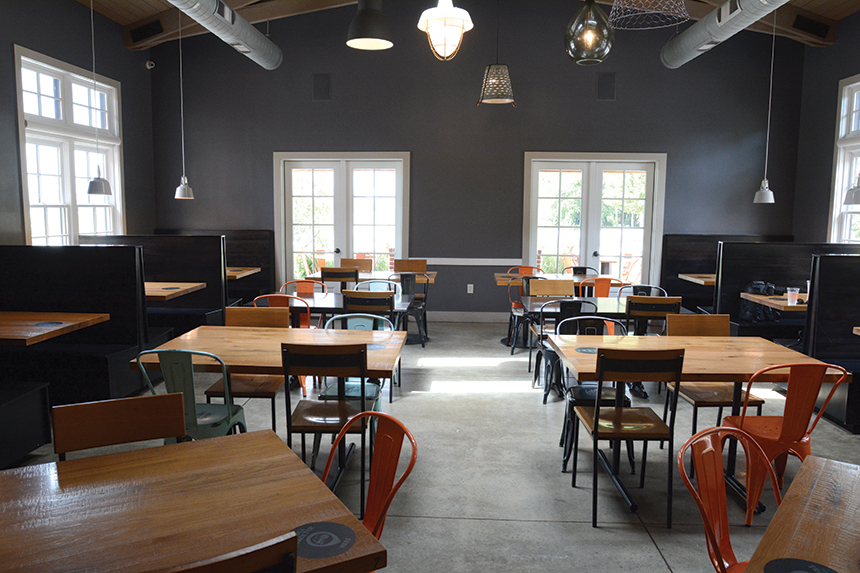 The Return of Indoor Dining

The Return of Indoor Dining

Pizzerias share tales of reopening their dining rooms to guests

Restaurant dining rooms across the country continue reopening to guests and
increasing capacity. For many pizzerias, it’s a welcome scene after a year of upheaval caused by the COVID-19 pandemic.

Though the nation’s pizzerias face a patchwork of different regulations and guidelines from one state – and one municipality – to the next for reopening indoor dining, some universal themes emerge.

Three pizzerias share the experience of welcoming guests back into their dining rooms.

A Marquette landmark, Vango’s reopened its 120-seat dining room in June 2020 after a three-month pause. Capacity was initially limited to 25 percent, though that jumped to 50 percent earlier this year.

“When we found ideas we liked, we implemented them,” Caron says.

Establishing comfort: Vango’s moved from reusable menus to paper menus, posted signage about wearing masks, publicized its cleaning practices, spaced out tables and trained staff on how to have respectful interactions with guests.

“Getting people comfortable in the restaurant again has been a top priority for us because if they’re not comfortable and don’t enjoy their experience with us, they’re probably not coming back,” Caron says.

A silver lining: While the dining room sat dark, Vango’s transitioned its front-of-the-house staff to taking phone orders, packaging carryout orders and curbside pickup. Caron says waitstaff brought extra focus to that role, from upselling beverages and desserts to making sure orders were accurate and all the necessary items – sides, extra sauces, utensils and the like – were in each carryout order. That hefty attention to detail then carried into the dining room’s reopening.

“There are so many things that can get glossed over in a rush,” Caron says. “Now, we’re bringing that same high level of focus to the dining room and it’s almost embarrassing to think about the past mistakes being caught now.”

Park City was an early COVID-19 hotspot because of the annual Sundance Film Festival – some media outlets, in fact, called Park City the nation’s “first petri dish” for the virus – and that sparked concern at Red Banjo, the Utah city’s oldest business.

“It was a scary time,” admits Tana Toly, whose grandparents opened Red Banjo in 1962.

Honest debate: After closing its 75-seat dining room in March per government orders, Toly and her family members held earnest discussions about reopening the dining room in May when allowed. While some neighboring operations did not reopen, Red Banjo welcomed guests back inside on day one.

“We knew we had committed employees who needed paychecks and people in our community who wanted to get out and have some normalcy,” she says.

“We buckled down and got it done,” Toly says.

Making investments: Utah did not impose a capacity limit, but rather mandated six feet between tables, which sliced the pizzeria’s table count from 16 to seven. In response, the restaurant ditched its long, six-seat tables in favor of square-shaped, easily movable four-tops.

“This way, we could reengineer the dining room as necessary,” Toly says.

In addition, Red Banjo expanded from a beer and wine license to a full liquor license, which is no small feat in Utah.

Baby steps: This past April, Red Banjo was permitted to fully reopen its dining room. Rather than jumping immediately to full capacity, however, the pizzeria slowly added a table or two to “assess people’s comfort levels as well as what we could handle as a business,” Toly says. Red Banjo also prioritized social media as a communication tool.

“It’s been a grassroots effort to let people know we’re here and ready to serve them,” Toly says.

“Big Bill” Ficke opened his namesake pizzeria in 1995 and it’s long been a Centennial favorite thanks to the spot’s tasty pies and Ficke’s gregarious personality.

The pandemic, however, halted Big Bill’s customary dining room vibe for more than two months. When the pizzeria reopened indoor dining in June, albeit with a maximum capacity of 50 people, Ficke rejoiced.

“It was a great feeling to get people back in the restaurant,” he says. “Interacting with people is a big part of our ambiance.”

Changing operations: Upon reopening indoor dining, Ficke immediately designated one entry door for dine-in guests and a second for carryout. He also removed about 30 tables from his 200-seat dining room, one divided across four distinct sections, and devoted one dining room section solely to carryout customers awaiting their orders.

Rediscovering the pace: Pre-pandemic, servers were accustomed to handling 10 tables with the help of two to three bussers. Today, it’s much the same, albeit with more extensive travel between tables.

“Save walking more, [front-of-the-house staff] are not doing anything they weren’t already accustomed to doing,” Ficke says. “We found our rhythm and got back into the routine quickly.”

“Sure, many people are feeling more confident now, but we have to respect that this virus still makes people anxious or afraid,” Ficke says. “By following the rules and having guest safety front of mind, we’ve been able to get customers back.”