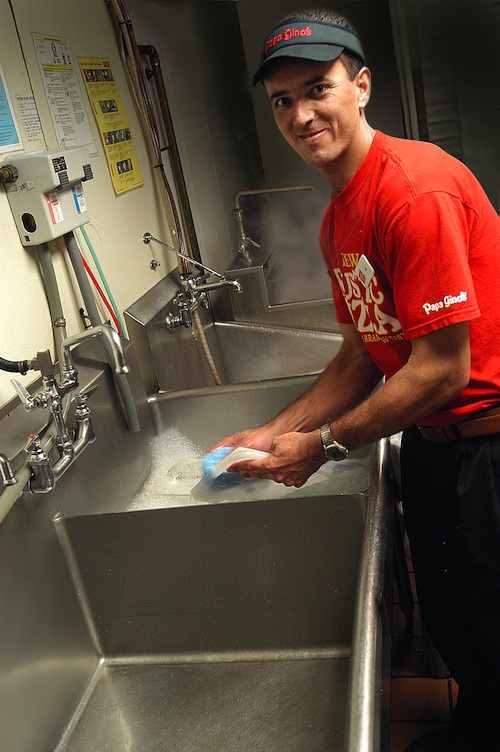 A pizzeria operator never wants to see money going down the drain. But that’s what happens when an operator is not careful about water usage.

Water costs are increasing across the country. It’s easy to see how water –– much of it squandered unless an operator is careful –– can quickly add up to a costly loss for a pizzeria.

Experts in water usage, and pizzeria owners who’ve tackled the problem of water waste, say the first step toward becoming more efficient about your use, and saving money, is to take a close look at your operations and see where water is being squandered.

Are employees running water over meat to thaw it? Is a toilet running? Is a faucet or sprayer dripping? Are your coolers air- or water-cooled? Are you examining your bill on a regular basis and does it accurately reflect your usage?

Topper consults with restaurants about how they can reduce their water costs and frequently sees water being misused in many ways.

“I see employees who just let the water in the sink run, run and run,” he says. “Or they spray the sidewalk for half an hour or they let the water run when they wash dishes. There are so many ways to waste water and it’s just a loss of money.”

Water/sewer rates in New York City, like those in many places across the country, have increased exponentially in recent years, he says.

Unlike other utilities, water/sewer rates are usually non-negotiable. Users in New York City have no alternative providers for receiving water, and no way to negotiate to reduce the rate.
“Water is the only thing in the city that you have to get from the city,” Topper says. “You can’t negotiate the rate, and you can’t shop around on price.”

Topper says he’s often called in by a business when they receive an exorbitant water bill and can’t figure out why. Before that bill comes in, he says a pizzeria operator can track whether the restaurant has sprung a costly water leak by regularly checking their water meter. The device has a triangle-shaped indicator that spins when there is a leak.

The leak might lead to a running toilet or a leaky faucet. It may be something an owner can correct on their own, or they may need to call a plumber, which Topper says will likely be worth the call.

“A $200 service call could save you thousands of dollars,” Topper says.

In New York City, landlords receive the water bill and then pass the costs along to the tenants. Pizzeria owners who rent their spaces in multi-tenant buildings need to keep a close eye on whether those costs are fairly attributed.

Topper recently was called in to 99 Cent Fresh Hot Pizza in Brooklyn where he discovered that owner Ali Shah was being vastly overcharged for his water.

Shah said his 750-square-foot space sells pizza by the slice. Upon receiving his first bill, he realized that the water costs being passed on to him would amount to about $3,000 a year.
“That’s a huge chunk of our budget. We had budgeted for about $1,000 a year,” Shah says.
The only items that consume water in Shah’s business include one toilet for employees only, a small sink and a cooler.

Topper placed a submeter in the pizzeria to accurately track the water use. The amount of water the pizzeria consumed for a six-month period amounted to just $272.18.
Shah was thrilled, quite naturally, when the readings were presented to the landlord who has readjusted Shah’s bill.

While Shah tracked his water use because of a high bill, Priscilla Lane-Rondeau says conserving water is part of her overall business strategy at 900 Degrees Pizza, which has locations in Manchester and Epping in New Hampshire.

She takes pride in promoting green practices at her pizzerias. Diners at 900 Degrees are not automatically given glasses of water. The restaurant uses low-flow toilets and low-flow nozzles on faucets and spray washers.

They also follow a weekly pull schedule. Lane-Rondeau says her staff is trained to plan ahead for what they will need and don’t waste water by running it over meat to thaw it in the sink.
When she buys appliances, Lane-Rondeau also keeps in mind how much water they will use. Though it is more expensive upfront to purchase, her restaurants use air-cooled rather than water-cooled refrigeration.

That’s a move that Topper applauds because he says refrigeration and ice-making equipment that use water are usually the largest water consumer in any food-related business.
“It’s common for valves that control the water on water-cooled equipment to fail causing water to flow 24 hours a day,” Topper says.

For those pizzerias that use water-cooled equipment, he advises regularly checking and maintaining it “so you don’t get soaked on your next water
bill.”

An audit — any kind — isn’t a process that sounds like fun. But a water audit can save a pizzeria a lot of dough.

Michael Topper, president of Aqua Audit, a water cost management firm in New York City, analyzes his clients’ water bills to ensure they are being properly charged. If billing errors are found, he contacts the water provider to get it corrected. If needed, he will install a submeter to accurately track water use.

Topper charges a business a percentage of the money he recovers for it.
Ross Terrano of Terrano Plumbing and Remodeling in south Florida also does water audits to identify where a consumer may be wasting water. A commercial audit costs $300, or it’s free if Terrano is already doing a large project at the business.

He says his audit gives clients real ways to save money.

“The audit gives the details of what we’d recommend and what you’d save,” he says.

The fixes he may recommend don’t have to be expensive. The cost of an aerator to reduce water flow on a faucet, for instance, is $3 to $10, he says.

Annemarie Mannion  is a freelance writer living in the Chicago area. She specializes in business and health stories.