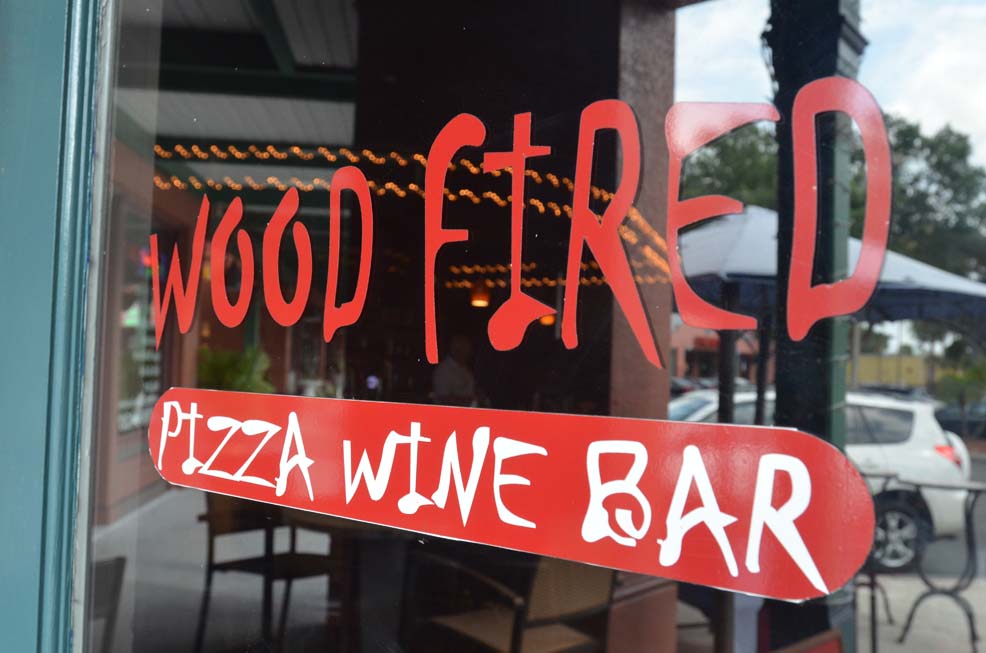 By outward appearances, Wood Fired Pizza & Nightlife is unassuming from the street. The small pizzeria is perched between a coffee shop and a nail salon in a strip mall near the University of Central Florida, and the restaurant has become a haven for locals and New York transplants alike. Here, Brooklyn native Peter Taylor lovingly mans the stunning wood-fired oven that gave the restaurant its name and takes center stage.

A former corporate America employee, Taylor traveled the world and became a student of pizza long before opening Wood Fired Pizza and Nightlife in 2009. “Every country thinks they have the best pizza,” he says. “They’re convinced of it. … But in Italy, there’s like 1,600 different styles of pizza. What they make in Rome is not what they make in Southern Italy.”

The same holds true for pizza in America, and Taylor took pages from many different styles to create a pie he believes is not only unique to Tampa but also to the industry.

“People want to come and share a pizza,” he says. “They’d rather say, ‘Hey I want half Bianca and half Margherita rather than two smalls.’ ”

Building the right oven became paramount to his operation as he formulated his business plan. “Everything that you look at here, that’s my passion,” Taylor says, standing in front of the 800 F oven as flames lick the 19-percent hydrated, kiln-dried oak. “My wife, Andrea, and I –– we built this. The bar you’re leaning on right now, I built. I had no idea how to make a bar. I figured it out. That oven, I built. When I came back from Italy, I thought: ‘You know, I think a true, proper Neapolitan wood-burning oven is cool, but I think it can be improved on. Not a little, but a lot.’

“My oven is so superior in terms of heat retention, how uniformly it bakes a pizza, how little wood it uses, the ease of baking. The proper Neapolitan pizza is temperamental, very temperamental. The Vesuvian soil, the Biscotto di Sorrento, the cooking surface is very rough. It’s pockmarked and very tough. Mine is like silky smooth.”

Wood Fired opened with a focused menu of pizzas (making up 55 percent of sales) that has since grown with consumers’ tastes. Dine-in accounts for 80 percent of sales, and delivery is not available. He offers appetizers and desserts, but doesn’t believe a big menu is necessary. They struggled initially in getting Floridians to appreciate upscale pizza, but that learning curve has diminished with a greater focus on fresh ingredients and quality on the restaurant scene as a whole.

“Every time a new health inspector comes in, he says: ‘So where’s your fryer?’ I don’t have one. They ask how I have a restaurant, and my answer is that for thousands of years, people cooked in a wood-burning oven. That’s why we do what we do. I think it is important enough to name a pizzeria after. It’s not about me –– it’s about the finest expression of pizza.”

He uses hydro-organic ingredients from a local farm when he can get it, makes his own Fior di Latte and even spent a good amount of time creating his own strain of local yeast that he believes sets his pizza apart. “I tend to treat yeast like a living, human organism,” Taylor says. “I maintain nine different strains of wild yeast. The one I use here is a local, dominant microflora that I caught off the coast of Florida under the assumption that if anything can survive out there, it must be really robust. And as it turns out, I was right.”

Top sellers are the Pizza Raquel (a Margherita pizza with San Marzano tomato sauce, fresh mozz, basil, olive oil and Romano and named after actress Raquel Welch) and the Pizza Sophia (San Marzano sauce, garlic, provolone, Asiago, Fontina, Parmesan and olive oil and named for Sophia Loren). The I Carusi (pepperoni, San Marzano sauce, fresh mozz and Pecorino Romano) is also a fan favorite. Growing up in New York, Taylor operated under the impression that all pizzas needed a tomato-based sauce, but he has learned to appreciate a good white pie. Since the oven has a 17-inch opening, a 16-inch is the largest pizza they menu, and there’s little margin for error.

The company’s second location opened in February 2012 in nearby St. Petersburg, Florida. His friends own an iconic craft beer business there, World of Beer, and believed Wood Fired would be a great addition adjacent to their bar. “St. Petersburg is like Ground Zero for the foodie movement now,” Taylor says. That location has a full bar (as opposed to beer and wine only at the Tampa unit), seats 300 and has a large patio, which adds a good amount of space.

Licensing is something he is “actively pursuing right now,” as Taylor does not have plans to open a third location himself. He says Wood Fired’s concept lends itself to different types of operations, be it full service or express, and a commissary will ensure consistency across the brand. “You can scale regionally,” he says.“You can scale on a St. Pete, Clearwater (and) Tampa market.”

As they grow, maintaining mindshare remains a critical factor for success. “The most difficult thing to do is enter a patron’s consideration for when they go out and dine,” Taylor says.

Restaurants must be willing to operate under the expectations of their clients, and for Wood Fired, that included taking $120 bottles of wine off the menu during the recession. Know your market, Taylor cautions, but don’t compromise quality.

“We try to have a level of service that’s a cut above,” Taylor says. “Our quality, at that home-run level. I tell my guys all the time I would rather go for a home-run every time than two doubles.”