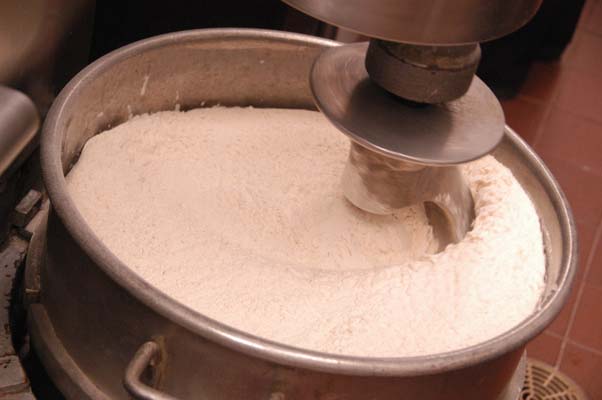 Dough Doctor: Mix it up

Dough Doctor: Mix it up

Is there a correct way to mix ingredients?

Q: I see differences in dough make-up procedures. Some call for stirring or whipping the salt, sugar, yeast and oil into the water and then finally adding the flour and mixing, while other procedures call for just adding all of the ingredients to the bowl and mixing. Is there really a difference?

A: The truth of the matter is that there isn’t much –– if any –– difference between all of the different dough make-up procedures. So why do so many variations exist? I think it all boils down to what someone did or started doing at one time and the procedure has been just passed down from one generation to another.

I don’t think that there are any really right or wrong ways to assemble a pizza dough, but I firmly believe that the process can be modified to eliminate or at least reduce the possibility of encountering dough or crust problems down the road. I have always been a firm believer in the KISS principal (keep it simple, stupid) when it comes to making any kind of dough, be it for bread, rolls or pizza crust. I think a double dose of simplicity is needed when we have an inexperienced, non-family member responsible for mixing the most important aspect of our pizza. Additionally, we have found at least one glaring falsehood that is directly related to how the dough is assembled.

Many dough-making procedures call for adding the water to the mixing bowl first, and then adding the salt, sugar and the yeast (fresh/compressed/block) and mixing or whisking these ingredients into the water. The thought process is that this more thoroughly disperses those ingredients, especially the yeast. The flour is then added and the dough is mixed.

While there is nothing inherently wrong with this procedure, it does require additional valuable time to incorporate those ingredients into the water, and if the individual should become distracted or leave the ingredients suspended in the water for a period of time, the salt and sugar can impact the yeast, affecting its performance for the better or worse (which could manifest itself as the dough is allowed to ferment in the cooler over a period of two or more days). In one case that I recall, this procedure was responsible for the dough occasionally blowing for no apparent reason. What we found was when the suspension was allowed to be made and to set for up to 30 minutes before adding the flour and mixing, the yeast would begin to actively ferment. So when the flour was finally added and the dough mixed, the dough was showing signs of fermentation in as little as five minutes after mixing. This is due to the fact that compressed yeast has about a 20-minute lag phase from the time it is added to the dough, or ingredient suspension in this case, until it begins to actively ferment. This is why we try to get the dough divided and into the dough boxes and in the cooler within a 20-minute period of time after mixing when the dough will be refrigerated for several days as part of the dough management program.

In this case, the fermenting dough was changing in density (becoming less dense), making it more difficult to cool. This resulted in the dough boxes being nested/covered before the dough was sufficiently chilled to control the rate of fermentation. So as the dough was stored in the cooler, it continued to ferment until it completely filled the dough box. Our solution in this case was to simply add the compressed yeast right on top of the flour (no need to suspend it in the water) just before dough mixing commenced.

In all of my years studying the different ways pizza doughs are assembled and mixed, I have come up with a procedure that addresses some of the issues common to other methods and that works well in most applications using a planetary mixer.