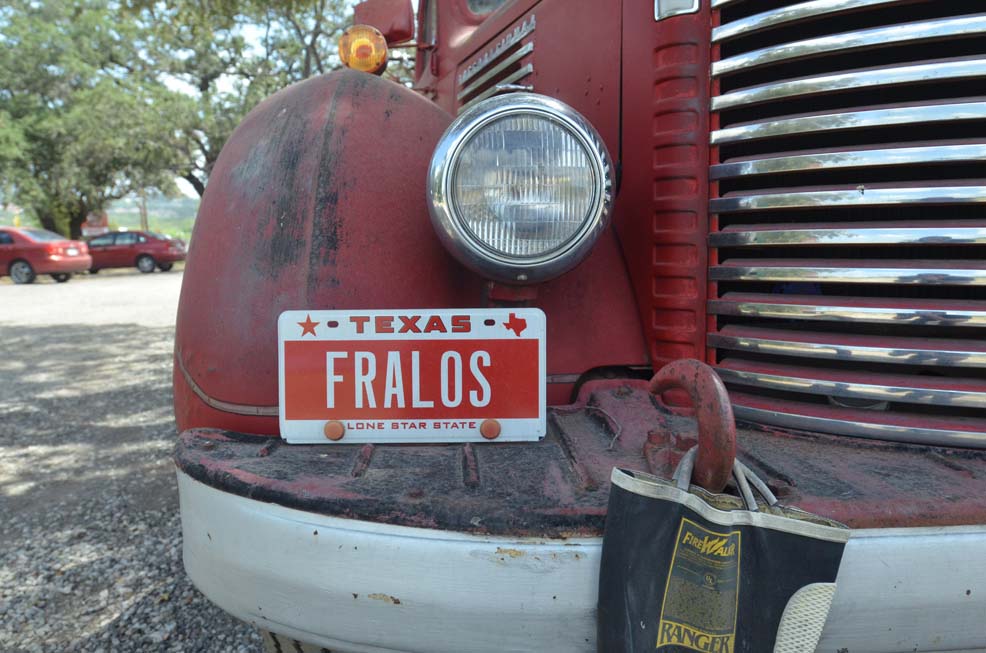 The art and craft of making pizza is something Frank and Lori Hakspiel take very seriously. That’s why they named their joint in San Antonio — now one of the city’s busiest and most-acclaimed restaurants — Fralo’s Art of Pizza when they opened in May 2004. While they combined their first names to come up with “Fralo’s,” conveying that serious pizza is indeed an art form was something they knew they also wanted to accomplish with their title. To reinforce that and play into the art theme, local artists are encouraged to hang their art in Fralo’s.

“We don’t charge them to hang their art,” Lori says. “They can sell their art right off our walls without someone taking a commission.

In fact, when Fralo’s first opened, artists weren’t the only ones who didn’t know anything about the pizzeria. The opening was what one might call low key.

“We had no sign,” recalls Frank. “We literally spray-painted the name, phone number and (the words) ‘We Deliver.’”

As you might gather, Fralo’s was hastily opened when Frank, who had been recuperating from an injury, was ready to get back into the workforce. He did virtually all of the work inside the restaurant himself, bringing the building up to code and preparing it for customer service. After the doors were open, things began to fall into place more quickly than anticipated.

“Within a month it just blew up in our face,” says Frank. “By 7 o’clock every night we were out of dough. We couldn’t keep up. We’d make emergency dough and serve it. We couldn’t age the dough like we wanted to.”

Ironically, the Hakspiel’s achieved the quick rise to restaurant success without a marketing budget. Instead, a little mystery turned out to be one of the fledgling business’ largest assets.

“That helped build some interest because people didn’t know what kind of place this was. People thought it was ice cream or yogurt. Some people thought it was a baked potatoes concept. So we had people coming in to ask about the restaurant before it was even open.”

The restaurant is situated on a long, thin strip of land that’s wedged between the interstate and a busy local access road. The oversized lot has allowed the Hakspiel’s to configure an outside seating area that’s perfect for entertainment. As such, the pizzeria has become a popular hangout for music lovers.

“We offer live music several nights a week,” Lori says. “We have a makeshift stage outside that bands use. The word has really gotten out and now we get a lot of requests from artists looking to perform here when they are in town. I get bookings from New Orleans and Nashville and as far away as England. We’ve had musicians from Canada and all over the United States. We provide them a meal and that’s really it.”

While the crowds for the music are often hit-or-miss depending on the weather, Lori says this is just another aspect of what sets Fralo’s apart.

another point of separation is the byob philosophy the hakspiels have allowed to carry over, even after the restaurant got a license to sell alcohol. In the beginning, Fralo’s was a dry establishment by law. Once it was able to add a bar, the bottom line saw an immediate surge. But, still, Frank says he hasn’t forgotten the restaurant’s roots.

“Business definitely increased when we added the bar,” says Frank. “We’re close to a school, so from 2004 when we opened, up until 2010, we didn’t have a beer and wine license. We kept fighting and fighting the city. And then, finally, one day the law changed.

“In the beginning, we really promoted BYOB so our customers could enjoy a beer or wine with their meal. So now, even though we can sell it, we still have people on weekends that will come in with a cooler loaded with beer like they’re going on a picnic. Even though we obviously don’t promote BYOB anymore, we still allow it.”

Beer and pizza are an ideal match, but make no mistake that pizza takes center stage at Fralo’s. In addition to build-your-own, the menu features 12 signature pizzas and four classic pizzas.

The 48 meat and vegetable topping choices include everything from pepperoni to duck confit, dried cranberries and egg. One of the more interesting signature pizzas, the “Baja Shrimp Pizza,” pairs chipotle pesto with shrimp, cilantro, pineapple, red onion and coconut shavings.

“A lot of the pizzas we have on our menu are based on comfort food ideas,” explains Frank. “So, for example, we have a Greek pizza. What we did there was start with the idea of a gyro and then put that into a pizza. Or we’ll take a beef fajita taco and put that into a pizza. That’s actually a very popular weekend special that we run.”

The aforementioned “Pozzi” is one of Lori’s personal favorites.

“It’s named after one of our employees,” says Lori, “and it’s basically our ‘baked potato pizza.’”

Future business growth will come via catering. the hakspiels have restored and outfitted a vintage fire truck and now use the unit for events such as festivals or wedding parties. Complete with a portable wood-burning oven and sink, the 1946 International truck has enormous marketing potential.

“Obviously there was a food truck explosion several years ago and a lot of people jumped on it,” says Frank. “I don’t want to reinvent the wheel. I just want to be a little different and do what I like. I really love driving the truck.

“I’ve fed as many as 150 people with it. And obviously with the wood-burning oven, it cooks the pizzas really fast. We turn over quickly.”

Fralo’s charges $1,500 to feed 1-50 people with the catering truck. Frank says if the price were any lower he would not be able to keep up.

“It’s getting really popular,” he says. “We could cater an event every weekend.”

One potential pitfall is that the restaurant cooks in deck ovens while the catering unit serves wood-fired pizza. Which means first-time customers at catered events might be thrown off by the difference. Frank doesn’t see this as an obstacle, however.

“Sometimes people say ‘Why don’t you do this in the restaurant, too?,’ he says. “But people understand that they are different ovens.”