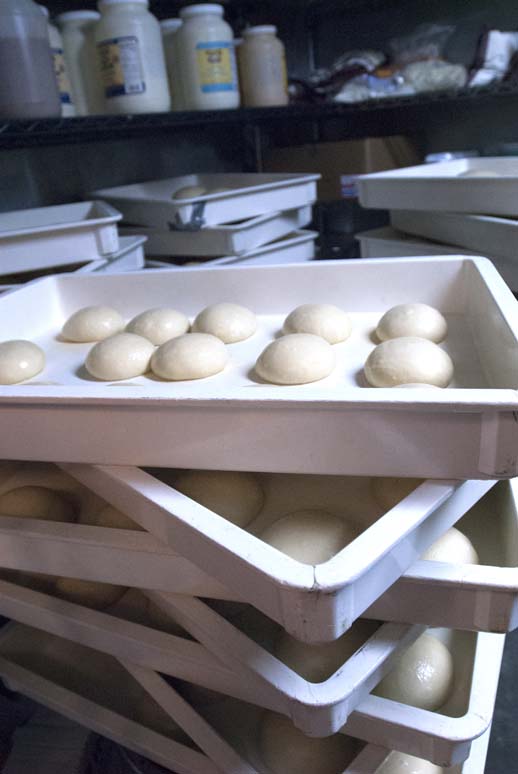 Q: Why is my dough wet and sticky when I remove it from the dough box?

A: While some may believe that this is caused by excessive dough absorption, the truth of the matter is that it is caused either by failure to cross-stack the dough boxes during refrigeration or not allowing the boxes to remain cross-stacked long enough to properly cool the dough before sealing the boxes closed. The moisture that you are seeing is the result of condensation being formed on the inside of the box as warm, moist air from the dough contacts the cold surface of the dough box. When the dough boxes are sealed too soon a dead air space is created in the box (which insulates the dough and significantly slows its rate of cooling, thus allowing the condensation to go on for a significant length of time). In addition to being sticky, these doughs will typically have a short usable life of only one day, after which the dough may “blow.” Or the individual dough balls may stick together, forming a single giant dough mass in the box. The easiest way to prevent this from happening is to take the dough to the cooler as quickly as possible after mixing, scaling and balling, then cross-stack the open dough boxes for at least two hours, or more, depending on the weight of the dough balls.

Q: One of the pizza dough formulas that we inherited with the shop contains a product called PZ-44, what can you tell me about this product? What does it do for our pizza dough?

A: PZ-44 is commonly referred to as a reducing agent for wheat-based doughs. In other words it makes the

dough softer and more extensible with an added benefit that it effectively reduces dough memory or snap-back after forming the dough into a pizza skin. The product itself is a combination of dairy whey and L-cysteine. It and its sister product Reddi-Sponge have been around for what seems like forever. They are very effective at what they do but care must be taken in their use. Too much of either product can literally liquefy a dough. While L-cysteine use levels are typically measured in parts per million (ppm) based on the total flour weight, PZ-44 is based on a percent of the flour weight. This is due to the fact that it is diluted with whey to make scaling and handling much easier. Most of us consider PZ-44 as an optional ingredient in hand tossed or sheeted crusts, but in pressed crusts it is so instrumental in preventing snap-back after pressing that it is almost considered to be a required ingredient. As a side note, we also have what is called “dead yeast” to work with, too. This product is essentially a mirror image to L-cysteine/PZ-44 as it functions in the exact same manner with the same results. The only difference is that dead yeast can be labeled simply as “yeast” if you come under labeling regulations, so it appears as a more consumer friendly name on your product label/ingredient declaration.

Q: We have a mixing bowl that is developing rust in the bottom. Is there anything that we can do to prevent this?

A: All of the newer mixing bowls are made of stainless steel, but the older ones (which might include yours) are made from a regular carbon steel that can be prone to rusting. To prevent this from happening the manufacturers coated these bowls with tin plate, which is quite durable. But with time this tin plate coating slowly wears away. To the best of my knowledge I am not aware of any approved coating that can be applied to the inside of the bowl, other than tin plate, that will hold up to the abuse dished out by a dough hook rotating inside the bowl with upwards of 80-pounds of dough being pushed ahead of it. The way I see it you have three options: 1) Send your bowl out to be re-plated; 2) Buy a new stainless steel bowl; 3) Make it a practice to regularly wipe the inside of the bowl dry and coat the inside of the bowl with a very light film of food grade oil (such as canola). While this won’t totally solve the problem, it will keep the rust at bay and keep everyone happy in the meantime.