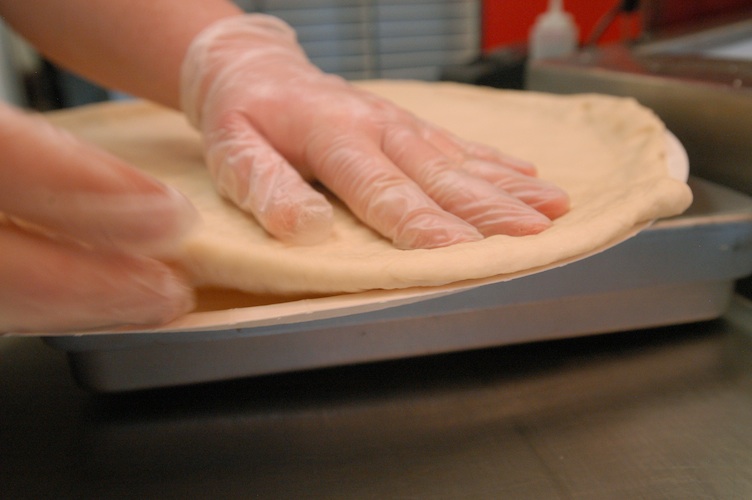 Q: This might seem like a rather basic question, but how do you make a decent take-and-bake pizza?

A: Several years ago take-and-bake pizzas appeared to be something of a novelty item, but today the novelty has worn off, and take-and-bake pizza has gone mainstream with even some of the big-box store chains beginning to offer them. To begin, take-and-bake pizzas are never prepared on a par-baked crust. Instead, they are made on a raw dough pizza skin, thus allowing the dough to further rise when baked in the consumer’s home oven to produce a lighter textured finished crust with an overall fresher, more pizzeria-like, presentation. I like to say that there are two kinds of take-and-bake methods. One type is used by the operator that wants to make a take-and-bake product to supplement their regular pizza offerings. In this case their standard dough formula is used but the procedure is modified slightly to make the take-and-bake pizza. These modifications typically consist of the following:

The other method is for operators who want to develop a dedicated take-and-bake store operation. By this method the dough formula is modified in addition to using the four procedural changes outlined above. The formula changes suggested are as follows:

Q: I have heard you speak at Pizza Expo and I know that you are not a strong advocate of bulk fermenting the dough prior to scaling and balling it and placing it in the cooler, but I’ve forgotten your reason for this.

A: My main objection to bulk fermenting the dough prior to scaling, balling, and placing it in the cooler for use over the following day(s) is due to the fact that during bulk fermentation the dough becomes significantly more gassy than it is immediately after mixing. Hence, it becomes less dense, a better insulator, and more difficult to uniformly cool.

More often than not, this ultimately leads to the dough “blowing” at some point. The common corrective action for this is to reduce the yeast level to a point where the dough won’t blow anymore, but this now creates a problem where the dough won’t rise properly after being fully dressed and placed into the oven, with the end result being the development of a “dreaded” gum line under the sauce across most of the center of the pizza. This now sends us off on a “wild goose chase” trying to remedy the gum line, and the truth of the matter is that the only thing that will effectively address the gum line issue is to find and address the causative factor, which by then has been forgotten, or is clouded in all of the problems resulting from that dreaded gum line.

When the dough is taken directly from the mixer to the bench for scaling, balling, placement in the pizza boxes, and cross stacking in the cooler, the more dense dough cools down more efficiently, and faster, thus preventing blowing of the dough and all of the related problems associated with it.