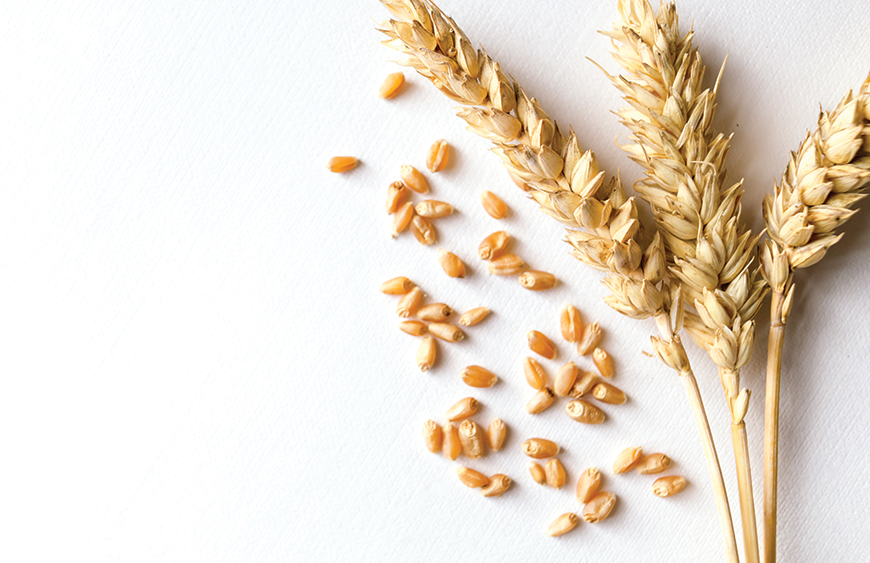 Excellent Ancient Grains in the Pizzeria

Fifteen years ago, I had no intention of making pizza without the usual white, bleached and bromated flour that all pizza places use. Then one hot September day, I travelled to my favorite Amish family in the rolling countryside outside Chesterhill, Ohio, to get tomatoes and basil. As I arrived, I saw Joe, the father, out in the field riding on what looked like a medieval wheat-cutting contraption being pulled by a team of four massive Clydesdale horses. A young guy named Brandon followed him stacking the grain that Joe had just cut into teepee-like piles across the field. I stopped and, after much banter, Brandon told me that this harvest was spelt and that he was starting a mill in town and once it dried, he would grind it and sell it to me. It was after Brandon milled the spelt that I incorporated this into my menu mix. We started advertising with a picture of Joe and Brandon below big letters saying, “You Spelt it, we dealt it.” To this day, our spelt crust is extremely popular for its deep nutty and sweet taste and many gluten-intolerant customers say it does not affect them as much as white flour.

Parting of the Bread Sea

Moses regarded the growing of grains as a priority and the wheat growers were treated like rock stars. The Greeks and Romans followed suit and considered the tiller of grains a distinguished citizen in a class above any tradesman of the time. When harvest season arrived, they cut the grain with scythes, plain sickles or just plucked off the grains using a fork with five teeth. Some generals even put the Roman soldiers to work during harvest time wading them into a wheat field with their sharpened swords. After the harvest, the thrashing began as heavy horse-drawn carts (called Carthaginian Chariots) crushed the grain with pointed teeth. The Roman-milled grain was sieved and refined. Sometimes they would mill it twice to create white flour called Siligo, fine flour called Foir or Pollen. Spelt was mostly used as whole meal flour and called farina. The precursor of pizza and modern pita bread was the wafer-thin and un-topped Panis Strepticius that was baked quickly on hot stones.

The products the ancients made went into items that each social class could afford. For instance, in the ancient Greek markets, a delicate, but unleavened biscuit using millet or barley (called azumos) was sold as a sort of tasteless hunk. But there also was a tastier artolangano, into which the baker infused pepper, oil, wine and milk. The poorer folks had a choice between dolyres or typhes. These were course dried gruel of emmer (mixes of rye and barley). The high fashioned ladies of the time preferred the puff cakes called placates, or sweet melitutes, which had light flour mixed with honey before baking.

Ancient Grains in the Pizzeria

Einkorn: From German “single grain” was cultivated in Syria 30,000 years ago. Sometimes called “Littlespelt,” it has a high protein content above 14 percent and is packed with fat, potassium, vitamin A, carotene and phosphorous. Because of the arrangement of starches, they released slowly so it does not spike blood sugars. Einkorn is difficult to seed and harvest because of a much smaller head and it grows chest-high, which leads to “blow downs” in the field. Even so, many growers are turning to this ancient grain. Because of Einkorn’s sticky attribute, I try to keep the hydration below 80 percent and a nice 60/40 mix with a higher gluten flour. This enables the pizza to achieve the great golden Einkorn color crust and moist cornicione tasting all nutty, with that tangy wheat flavor.

Rouge de Bordeaux: This has been a favorite of French bakers for a long time. At 15.25-percent protein, it presents a nutty, earthy crumb with notes of cinnamon spice. It is considered a Heritage wheat and has been grown in France since the 1800’s. This flour can be a bit expensive, so I like to mix it with other flours at 30 to 40 percent. Nothing touches a pizza made with this flour like mushrooms, Fontina and garlic. Other pizza toppings that work well with this dark flour are beef bacon, burrata, truffles and truffle oil, Gruyere cheese, Brie, apples, walnuts, Gorgonzola and (staying in that French lane) duck prosciutto and Foie Gras after the oven!

Spelt: This ancient variety of wheat has been grown as far back as ancient Egypt. In 750 BC, it became the dominant wheat species in Germany and Switzerland. These days, the hard bran shell is perfect for warding off insects and mold which leads to less human spraying. I get mine grown organically by local Amish, who sell it to a local mill in town at 13-percent protein. This grain flour is a little bit nuttier and sweeter than conventional white wheats and absorbs more hydration. For the pizza maker, I recommend a finer grind because of the sharp outer bran that can cut through the alveoli, or gas-filled lungs, when they are proofed and filled with delicious gasses. I also recommend mixing with white spelt or a higher gluten Manitoba wheat for conventional pizza cooking temperatures (around 500 F.)

Durum Wheat or Semolina: This Italian favorite is mine also. In Italy, and especially in Puglia, the Appulo, Ofanto, Creso and other varieties are grown like the Russello grown in Sicily. This wheat grain produces sweet bread with a cakelike crumb and crisp crust. In this country, fine Semolina is usually labeled “Extra Fancy,” whereas coarser durum is called “No 1.” Some beautiful pizzas can be achieved under high heat using an acidi madre or natural starter, but I also use it with a direct method with dry yeast and biga. I especially love making Foccacia Barese, mixing it with local mashed Corolla potatoes as it finishes like a savory cake adorned with summer tomatoes and extra virgin olive oil.

Other contenders for fabulous pizza crusts are Kamut, Buckwheat, Turkey Red, Emmer, Teff, Farro, Sorghum and amaranth as well as others.