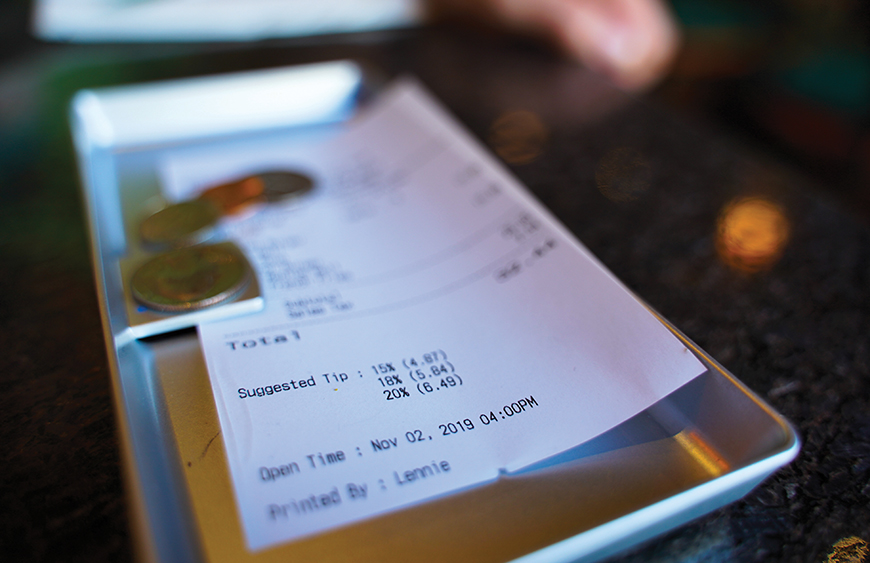 The State of Tipping

The State of Tipping

A look at tipping issues pizzeria owners are recently facing

In an already challenging labor market, pizzeria operators have another thing to monitor when it comes to their current employees: tipping. From tip sharing to accelerating calls to eliminate the tip credit, regulations and debate at both the state and federal level continue swirling.

“In some quarters, there is real hostility to the notion of tipping and the tip credit,” confirms Paul DeCamp, former administrator of the U.S. Department of Labor’s Wage and Hour Division who spent summers of yesteryear working in Ann Marie’s Italian Kitchen in his hometown of Norton, Massachusetts.

As indoor dining becomes more prevalent and restaurants battle for labor in a tight market, tipping practices gain even more attention, especially since the stakes for noncompliance can be costly, including penalties and litigation.

“You have employees working more hours and more people paying attention to the specifics of compensation,” says Matt Feinberg, an attorney with Washington, D.C.-based PilieroMazza.

There are three tipping issues that pizzeria owners would be especially wise to mind:

The 80/20 rule from the Department of Labor (DOL) said that restaurant owners could not take a tip credit for work performed by a tipped employee if that individual spent more than 20 percent of their time doing side tasks that are not immediately tip generating. Common restaurant side tasks include setting up for a shift, rolling silverware and cleaning tables.

“So, if you have an employee who spends 30 percent of his or her work time setting up a restaurant before opening and doing other prep work, the Department of Labor takes the position that the employee should be paid at least minimum wage during that time,” says DeCamp, now the national co-chair of Epstein Becker Green’s Wage and Hour Practice Group.

While the oft-contentious 80/20 rule was slated to evaporate last March, the Biden Administration halted the change. Currently reviewing comments, the DOL will not make any changes to the 80/20 rule until the close of 2021. Notably, numerous states, including California, Minnesota and Washington, do not allow the tip credit, while legislators in many other states are pushing for the same.

An issue fraught with risk for restaurants, DeCamp suggests operators eliminate or reduce the time tipped employees partake in opening or closing tasks that count toward the 20 percent of non-tipped time; pay employees the full minimum wage rate during shoulder periods like opening and closing; and assign non-tip generating work to employees not taking the tip credit.

“It makes sense to do what you can to minimize risk,” DeCamp says.

The DOL has long taken a stance against combined front of the house and back of the house tip pooling. As of April 30, 2021, however, DOL regulations implementing a March 2018 change to the federal Fair Labor Standards Act now permit tip sharing with back-of-the-house employees, such as dishwashers or line cooks, so long as the restaurant pays everyone at least the minimum wage. Going this route, restaurants also avoid any 80/20 rule uncertainty since no employees are subject to the tip credit.

Many in the restaurant industry saw the recent DOL rule as a positive development that could help in the recruitment of back-of-the-house employees and compel employees across the operation to work together to ensure positive guest experiences.

In some states, however, any tip pool must be purely voluntary – and what counts as voluntary is sometimes tricky. Camilla Hundley, Feinberg’s colleague at PilieroMazza, suggests restaurants develop a set of practices for operating a tip pool as well as tipping standards that management and employees clearly understand.

“Have this posted in the restaurant or have tipping policies outlined in an employee handbook that employees then acknowledge and sign upon their hiring,” Hundley says.

No. 3: Supervisors in the tip pool

Another DOL rule took effect April 30 as well: managers and supervisors are prohibited from receiving employees’ tips as part of any tip pooling arrangement. While that directive might seem rather straightforward, DeCamp considers it a “red flag issue” given ambiguity around the term “supervisor.” Is a lead server considered a supervisor? What about a head bartender?

The DOL is now trying to determine who is – or who is not – excluded from the tip pool. As a practical matter in today’s restaurants, these lines can blur as some employees take on added responsibilities amid labor shortages.

DeCamp’s suggestion for the time being: “To the extent that you have people with supervisory responsibilities serving customers, be careful about them being in the tip pool with anybody else. If this is something you’re going to do, then talk to counsel first. And if there’s any doubt, then keep these people out of the tip pool.”

DeCamp cautions that on this and many other labor and tipping issues, restaurants must comply with any state and local requirements, which could be more restrictive than federal law.

While there is skepticism that the bill will pass at the federal level, at least as initially constructed, restaurants should know that the tip credit is on the chopping block in a few different states, including Michigan and Maine, as well as Washington, D.C. Recognizing that the feds might not drop the tip credit, grassroots groups continue lobbying state legislators to end the practice.

“There is this movement out there, so if you want to see current tipping practices remain, you need to get involved,” wage and hour expert Paul DeCamp says.