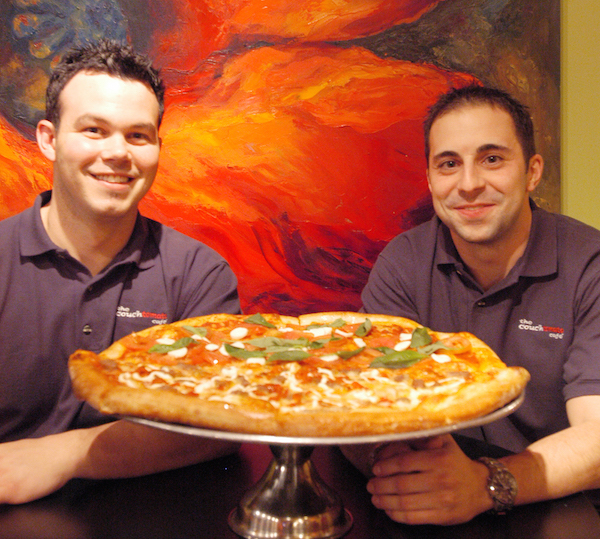 Catch-a-Fire Pizza has a success story that many food truck operators dream of when they start their mobile pizza business. Jeff and Melissa Ledford started out with Jeff working the makeline and Melissa managing the window of their year-round food truck. “It was 2013 and it was Super Bowl Sunday,” Melissa says of the food truck’s first day of operation. “People thought we were crazy. We parked outside of a local pony keg thinking people are going to go in and buy the beer and come out and buy the pizza for the game.”

Jeff adds, “We probably sold 20 pizzas, but we just thought we had made it.”

The Ledfords strategically aligned with prosperous businesses that had a steady flow of patrons, particularly taprooms, hitting nearly every brewery in the Cincinnati area. The move would escalate their growth beyond what they imagined.

One relationship in particular helped catapult Catch-a-Fire from mobile to brick-and-mortar, MadTree Brewing. “We really developed a partnership with MadTree,” Melissa says. “They opened about the same time that we did. We hit it off. Our two teams just kind of jived, our staff and their staff; our food; and the way we are business like-minded in a lot of ways.”

What started as parking the food truck in MadTree’s lot turned into becoming a permanent fixture inside of the original MadTree location. “It took a long time to get our tiny little space built inside,” Melissa says of the 350-square-foot restaurant inside MadTree. “It was February of 2015 that we opened in their MadTree 1.0, that was their original location on Kennedy Avenue.”

But after Catch-a-Fire opened at MadTree, the bustling brewery was ready to expand in a major way into an $18 million, 50,000-square-foot complex featuring a taproom, massive brewing operation, outdoor beer garden, private special events spaces and the 3,000-square-foot Catch-a-Fire in 2017.

“The grandeur of the taproom area at MadTree, it’s large, it’s open, it’s spacious,” Jeff says. “It’s a lot of garage doors so they have a lot of open-air feel. Our kitchen over there is very much an exhibition kitchen. When you walk in the main entrance and look left, we are right there with three giant ovens.”

With the new opportunity came a test of their operational efficiency and company culture. “We thought in our best guess we’re going to go to this new place and it would be awesome if we did twice as much business as we’re doing (at MadTree 1.0) and within the first couple of weeks we were doing three times as much or more and our staff went from a dozen people to like 50 people very quickly.”

With a huge footprint inside of the expansive MadTree complex, the Ledfords had dialed in the high-volume operation and quickly became among America’s highest grossing independent pizzerias on the 2019 Hot 100 Independent Pizzerias list.

Striking While the Iron Is Hot

Catch-a-Fire had cemented his reputation for wood-fired pizza in Cincinnati. The Ledfords put the wheels into motion to open a new standalone restaurant. “We’ve always been pretty ambitious and driven,” Melissa says. “So once we had gotten settled into the bigger space at MadTree, we started thinking about it. We knew that was the next thing. It was just a matter of where and when and how.”

The Ledfords searched for that perfect piece of land to build another Catch-a-Fire from the ground up. They had their sights on the neighborhood where the food truck got its start, Blue Ash, a thriving, close-knit city within the metro Cincinnati area.

The demolition and new construction took over a year. “That’s not including us doing the research, finding the location and purchasing the property,” Melissa says.

Adapt from the Jump

Just as the Ledfords prepared to open the freestanding location in spring of 2020, a global pandemic halted indoor dining. With the new location built on its indoor dining experience, Catch-a-Fire’s opening was postponed until July 2020.

Catch-a-Fire repositioned itself as a carryout spot for pizza and beer. Stocked with regional and in-state beers and California and Italian wines, the to-go operation held steady until they could seat people inside at limited capacity more than a month after opening. Catch-a-Fire was able to lean on its large patio, outdoor lounge and airy indoor/outdoor garage doors.

But cold weather soon came, and Jeff and Melissa had to get creative. They filled their patio with outdoor garden igloos that are heated, lighted, equipped with bluetooth speakers for customers to create their own music mix and can accommodate up to eight people comfortably. The igloos were a hit. With Cincinnati’s prevailing winters, Jeff says, they will use the igloos post-pandemic.

As Pizza Today visited the Blue Ash location in July, the city had lifted restrictions on seating and Catch-a-Fire could operate as it was built to, a full-service dine-in experience. The restaurant is split between the bar and dining area. The interior has upscale features mixed with warm color tones and a visible Bob Marley vibe. The showstopper is its open kitchen featuring two massive wood-burning ovens. With a full wall of garage doors in both the dining area and bar, it provides an indoor/outdoor feel. An oversized outdoor fireplace splits the patio table seating and lounge area. The bustling patio faces a busy Kenwood Avenue, giving the restaurant plenty of street marketing exposure.

The menu at Blue Ash diverges a bit from the Oakley location. In addition to the creative meat and veggie pizza options at the MadTree spot, Jeff says, they’ve been able to add more Italian classics at Blue Ash.

“As we were designing this place and figuring out who we are over the years, we’ve always experimented with different things and tried different foods and we have a very culinary focused team behind us,” says Jeff, who has an extensive background as a chef. “Melissa and I, we love playing around with different things. So, when we opened up here, it’s always our intention to do more than just pizza. We want to be a wood-fired restaurant that does really awesome pizza. We’re going to have some different entrees pop up regularly that you might not expect from a pizzeria.”

Catch-a-Fire recently launched a brunch program. “That was our first foray into some very non-traditional pizzeria items,” Jeff says.

Jeff and Melissa actually delayed the rollout of the weekend brunch by a month so they could get a handle on the employee crunch that many restaurants are experiencing.

The Ledfords say they are now able to staff at levels they need for the two locations. To make it through the hiring crisis, they initiated a word-of-mouth campaign, hiring bonuses, referral bonuses and a 20-percent wage increase.

Catch-a-Fire fared better than most and Jeff and Melissa credit that to their company culture. “Our culture is really strong,” Melissa says. “It’s about positivity and taking care of each other, teamwork and all of those good things. It’s in a very sincere and authentic way. We’re not going to be like corporate. It just comes from that kind of place, and I think it makes a difference.”

Jeff continues, “It’s our management and our people in leadership who are walking the walk and continuing to pass that along.”

Catch-a-Fire’s leadership team has been critical to its growth. “A lot of our managers have been with us since the truck days and the original location at MadTree,” Melissa says. “We’re very much all about finding those strengths in people and promoting them in a direction where they are going to fit.”

The culture will be critical as the Ledfords look to grow again. The next Catch-a-Fire is already in the works in Lebanon, Ohio. “We’re kind of ambitious like that,” Jeff says. “Within a month or two of opening here, we were already kind of making announcements for the next spot which is fortunately taking plenty of time.” Typically, operators look to speed up the growth timeline. But with the uncertainty of the past year, the Ledfords are content with the slower rollout.

The couple saw a void in the Lebanon market that was ripe for their concept. “Part of the vision is some kind of amalgamation of what we’ve created here in Blue Ash and what we have over at MadTree,” Jeff says. “It’s going to be a big space, about twice the size of (Blue Ash).”

When asked about the future vision of Catch-a-Fire, Jeff and Melissa are not limiting the concept to southwestern Ohio.