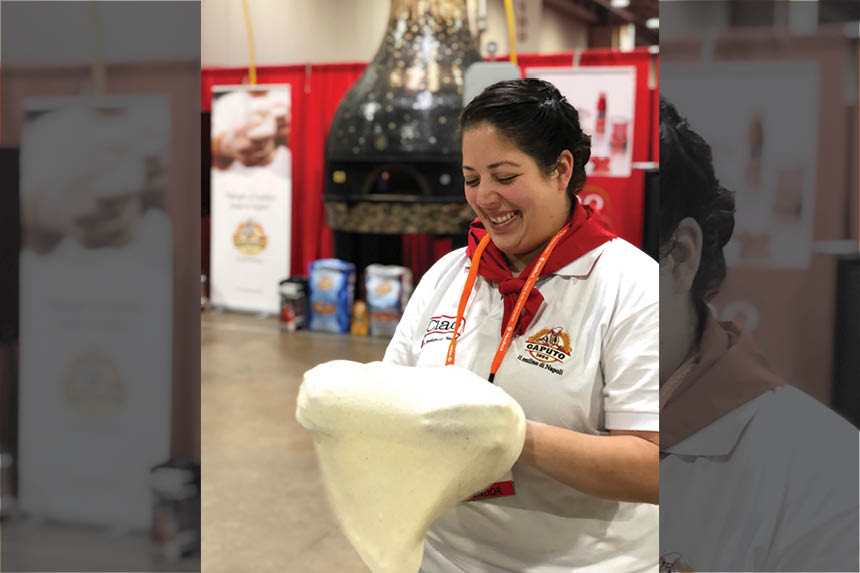 Knead to Know: Going for Gold

Knead to Know: Going for Gold

This generation of pizza makers views pizza competitions as a proving ground for innovation and a pathway to recognition. Competition has served to unite pizza makers but make no mistake, consistent winners are fiercely driven to succeed. We are proud of the pizza we serve in our shops but the unique challenges of making dough at a competition venue coupled with strict judging criteria require that we consider modifying or adapting our dough if we are going to make a serious run for the Gold.

I spoke with Laura Meyer, Executive Chef for Pizza Rock in Sacramento and Las Vegas. Laura is a protégé of Tony Gemignani. A multi style champion, Laura has emerged as a competitive force and gifted coach in her own right. She agreed to share her experience as an international competitor.

Every pizza maker has to start somewhere but sometimes fate lends a hand and shapes our future as Laura explains.

LM: I got my start in 2006 at my local pizzeria. It happened to be where Tony G. worked and where it all began.

LM: In 2011 I moved to San Francisco to take the KM role at Tony G’s Tony’s Pizza Napoletana. I didn’t really think of restaurants as a career until I had seen the culture and community that surrounds restaurant life in SF.

JA: Over time Laura’s role in the pizzeria under Tony’s mentorship has evolved.

LM: I was a pizza maker/cook/did anything. Slowly I proved that I was capable of more and moved into a manager role. It wasn’t until 2011 when Tony asked me if I wanted to take the KM role that I realized I was destined for more. I don’t think Tony, or I really, thought about what I was capable of, but we knew there was potential for more. What more was had yet to be determined, but the challenge was there. I took on the KM role and slowly learned the skills needed to not only make different styles of pizza, compete, manage a kitchen with more moving parts than a car, and become a public speaker —but also how to navigate personalities and build relationships. Now I’m the executive chef for the company and have a hand in multiple projects and work with various companies worldwide.

JA: In addition to being a brilliant pizzaiola, Laura has developed an understanding of her leadership position in our industry.

LM:  It’s one thing to know every technique and style of pizza, but if you don’t know how to speak and work with others and teach them, no vision will be a success.

JA: Champions in any field agree that victory depends on more than just technical skill. Developing a winning mindset is a crucial component that often separates winners from the rest of the pack.

LM: Being slightly uncomfortable at all times is a driving force. My coach growing up used to say, “you need to get comfortable with being uncomfortable” and that’s what competition is for me. It’s easy to get wrapped up in the day to day that is a restaurant, especially when you’re the boss, and become complacent. Competing pushes you. Tony said I could compete for the first time in 2013 in Las Vegas and that’s when I learned how big the pizza industry really is. From that first time I had the itch to compete. More to prove to myself that I could do it than to win.

JA: Laura has developed a healthy attitude about the overall value of participation.

LM: You always learn something new. A restaurant could be open for 20 years and have every procedure and recipe dialed in, but competing teaches you there’s more out there than what’s within your four walls.

JA: Perhaps one of the most useful byproducts of competing is that often the winning method and styles are an indicator of emerging trends. For example, the national popularity of Detroit style was ushered in with a victory by Shawn Randazzo.

It’s no surprise that Laura has some clearly defined standards for what constitutes a winning formula.

LM: I’m seeing higher hydrations and more mixed grains and types. Those with technique and execution are the ones who win consistently.

I’m looking for something light but that has good contrasting texture. A crunch on the outside and a soft interior.

JA: Identifying the desired result is only step one. The real challenge is achieving your goal under less than optimal conditions. That requires adaptability. Often competitors show up unprepared for the many variables that are part and parcel to making dough on the road. Laura observes:

LM: I usually have to adjust for varying temperatures and lack of time. Normally fridges, if they’re available, are either too warm or too cold.  You never compete when your dough is ready. You have to learn how to make changes quickly and those decisions can make or break your pizza.

JA: International competition presents a whole other series of challenges.

LM: In Italy the fridges are warmer than here in the U.S. and I had made my dough and the next morning it had already nearly exploded out of the container. I knew temps were important, but I was so used to 35 F fridges that I didn’t know how quickly things could change. On a separate occasion with the fridge being too cold the yeast activity was so slow it looked like the dough hadn’t even begun to rise. Both times I’ve won something major has gone wrong. I’ve always had to figure out a plan B and move forward.

Laura’s dough for this year’s World Championship in Italy:

After mixing, bulk ferment the dough at room temperature for 2 days, cut and ball. Rest in cooler for 24 hours before use.